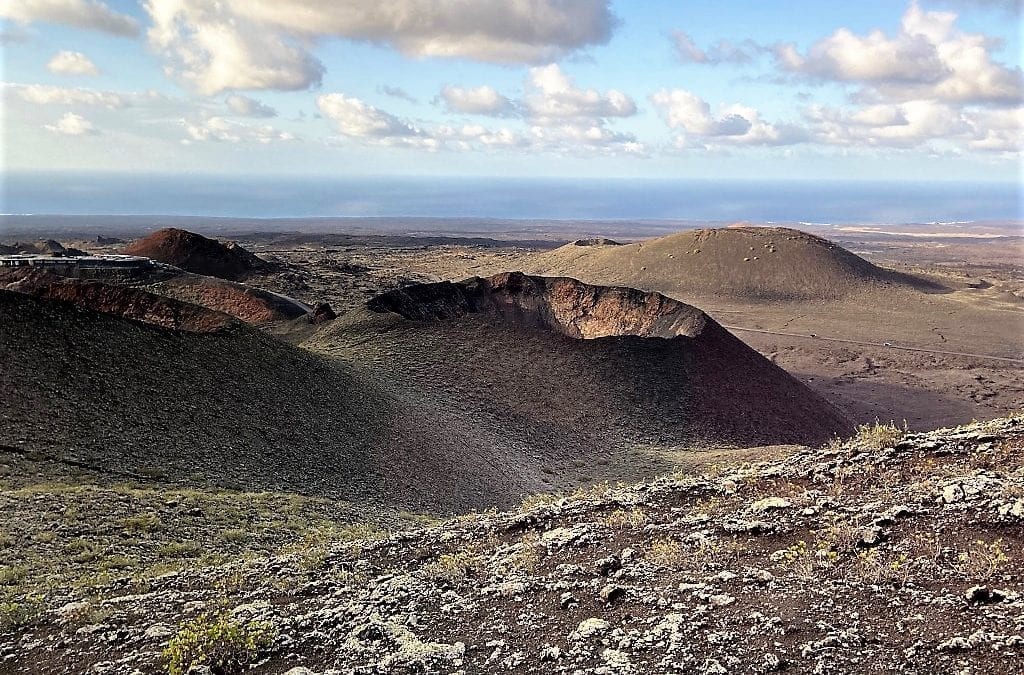 I am not a great one for getting crammed in a bus with a load of other tourists, but sometimes there is no alternative. Timanfaya National Park is one such place. In an attempt to preserve the volcanic national park the Lanzarote authorities have banned people from walking over the terrain, forcing you to take the bus. It is a move that I fully endorse.

As the recorded tour guide informs us in Spanish, English and German – the French are clearly not welcomed – about the history of the park, I marvel at its otherworldly beauty, while testing my Spanish.

The national park that was established in 1973 covers some 50 square kilometres. The volcanic eruptions that formed the landscape occurred between 1730 and 1736 covering some 200 square kilometres, or a quarter of the island. Apparently only one person died in the explosions, although this is hard to imagine when you see the scale of the lava flows.

On my previous trip to the island, while walking Lanzarote from North to South, I had spent days scrambling through the rofe, the volcanic gravel that lies everywhere, and climbing volcanoes in the Natural Park of the Volcanoes, which is free to enter. There are some 150 to 300 volcanoes on the island, depending upon who you ask.

Then my guide was Raquel Mazariegos from Blackstone Trek & Tours, and once more it is the native from Madrid, who made Lanzarote her home many years ago, who escorts us. Raquel used to be a guide at Timanfaya National Park, so she is perfectly qualified for this tour.

After the bus tour, Raquel takes us to a pit close to the Timanfaya National Park restaurant that was designed by Lanzarote’s most famous artist and architect César Manrique. A man creates a temporary geyser for us with some water. The hot jet of steam demonstrates the monstrous power of volcanoes, that tragically was to prove so fatal in New Zealand shortly afterwards.

As the crowd dissipates, Raquel persuades the man to hold some tumbleweed over a hole in the ground. Slowly the grass ignites and eventually becomes engulfed in flames.

Unfortunately we are too late for the third party trick, as the volcano-fired oven, where food is barbecued literally from the heat of the volcano, is not in use – it being after lunch.

At the centre of the restaurant is a fig tree that is supposed to have been planted here by a hermit, but it has never given fruit as the ground is too hot. Whether the tale is true or not, the restaurant affords wonderful panoramic views of Timanfaya National Park and is a great spot to break up your trip.

After Timanfaya, Raquel drives us to El Golfo, on the outskirts of the national park. Here you can walk along the coastline and into the park, so long as you keep to the prescribed path.

El Golfo volcano was formed two million years ago. During the 1730 eruptions it flowed into the Atlantic, with a green lake formed inside its crater. The colour comes from the algae in the lake.

A short path takes us from the small town of El Golfo, with its many restaurants luring you to enjoy its seafood, to just above the crater. The views down to the lake and across to the Atlantic are quite spectacular.

Close by, Los Hervideros is another popular spot with tourists who came to see the waves crashing into the rocks in natural inlets created when the larva flowed into the sea. Sharp walls of basalt rock rise from the Ocean bed in spectacular form. However, you are advised to keep to the path as the waves are unpredictable and untamed.

The final stop on our tour is at Bodegas Rubicon, a winery that harks back to the 17th century. On my previous trip, I had marvelled how the inhabitants had managed to cultivate wine in the volcanic soil on an island with so little rainfall. Now I can taste the fruit of their endeavours.

Apparently there are 14 wineries on the island, and tasting a range of white, red and rosé makes for the perfect conclusion to our trip – dousing the fire after spending a day with Lanzarote’s volcanoes.

Opens at 9am and closes at 5pm, with the last bus at 4pm, although it stays open later in the summer. Be warned there can be long queues at popular times.

Blackstone Trek and Tours runs trips to the national park and elsewhere on Lanzarote. Click here for further details.