Mark Bibby Jackson visits the beautiful medieval city of Kortrijk in Flanders to discover a place rich in history, with a wonderful cuisine and excellent spa. 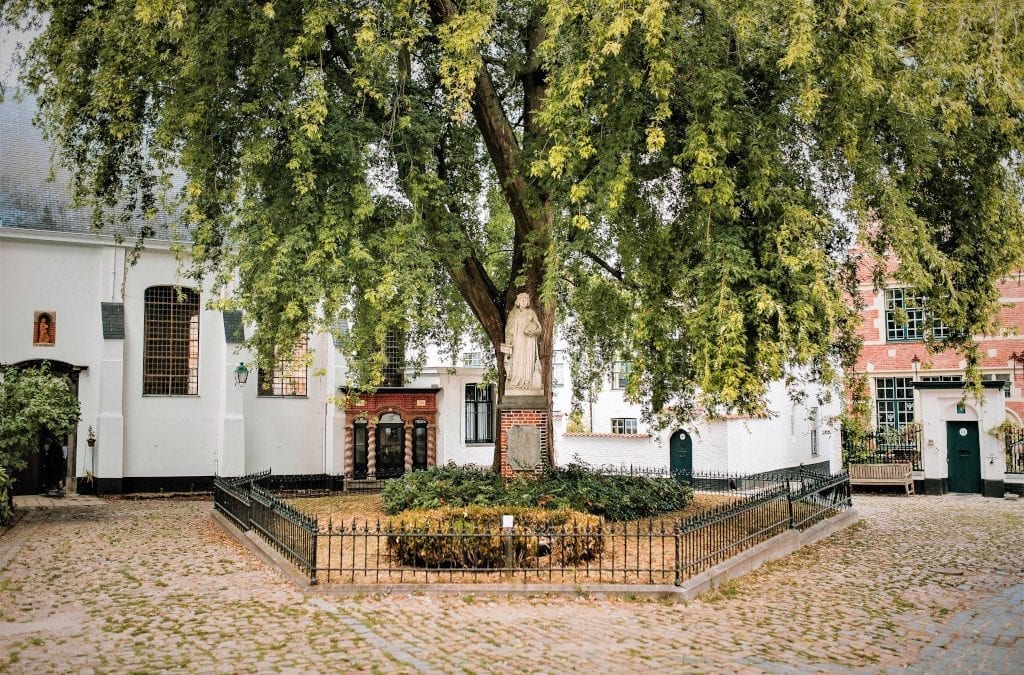 Mark Bibby Jackson visits the beautiful medieval city of Kortrijk in Flanders to discover a place rich in history, with a wonderful cuisine and excellent spa.

One of the great things about Europe is the number of undiscovered gems waiting to be discovered a short train ride away. Until recently I had never heard of Kortrijk (or Courtrai as the French call it), let alone managed to get my tongue around those strange Flemish consonants. So, as I boarded my Eurostar headed to Lille, from where it was a further 30-minute ride to my destination, I little knew what to expect – I have never been one for excessive pre-trip research. Live the moment is my slothful motto.

I learned something of the culture of Flanders on my recent trip around essential Antwerp, but my knowledge of its history was scant. Griet De Vriese, my guide on a city tour of Kortrijk, was soon to set this right.

Battle of the Golden Spurs

Kortrijk is famed in this part of the world, for it is nearby that the Battle of the Golden Spurs (or Battle of Courtrai) was fought on 11 July, 1302.

The battle is the Flemish equivalent of Agincourt as the rebellious folk of Flanders actually managed to beat the French army of King Philip IV, whose horsemen got stuck in the bog. The victorious Flemish elected to kill those French nobles captured, rather than holding them for ransom as was the custom. They then took their spurs as trophies to hang in the Church of Our Lady in Kortrijk.

The eleventh of July is still a national holiday for the Flemish community here. From comparative anonymity, the victory gained in importance throughout the 19th century with the growth of Romanticism and nationalism, which only intensified after the independence of Belgium in 1830. Artist Nicaise de Keyser painted the battle in 1836, and writer Hendrik Conscience made the battle the centre of his 1838 novel, The Lion of Flanders. All of this is explained in the informative Kortrijk 1302 museum.

Belfry and the Market Square

Sadly for the people of Kortrijk the glory of victory over the French was relatively short-lived. In 1382, troops under Louis II of Flanders (Louis of Male) with the help of Charles VI of France, vanquished the Flemish army led by Philip van Artevelde at the Battle of Roosebeke (Battle of Westrozebeke). Lacking the funds to pay his troops Louis instructed his mercenaries to sack Kortrijk, setting the city ablaze.

In addition to rescuing the spurs, the invading army also removed the mechanical bell striker, called Manten, from the belfry on the market square (Grote Markt), carrying it off to Dijon, where it still remains. The current bell-striker dates back to the 1960s when Manten was provided with a wife, Kalle.

The Unesco-listed Belfry still remains although the surrounding buildings have been demolished. Like Dresden, Kortrijk was heavily bombed in the Second World War by Allied forces, but unlike the German city here little remains of the medieval town, although the beautiful Hotel Damier has a façade that dates back to 1769.

This does not mean that the market square is without character.

Remodelled in 1999 by Italian architect Bernardo Secchi, the Grote Markt is a very pleasing mix of the modern with the old, especially as you cast your eye past the belfry to St Martin’s Church. A wonderful place to dine or simply have a coffee, the square explodes with life in summer, and has a pleasant market each Monday.

At one end of the square lies Kortrijk city hall. The original wooden structure was destroyed in a fire, but the current stone building, renovated in 1959, appears very much as it did in the 17th Century. A mix of gothic and renaissance architecture, the 19th century statues on the outside of the building represent the counts and countesses of Flanders. However, it is inside that the real treasures lie.

Downstairs is the Alderman’s Room, where justice was meted out and weddings held – which was the worse fate I’ll leave you to decide. The main feature is the stone fireplace from between 1517 and 1527 adorned with images of the Bible and coats of arms. Around the room are magnificent murals depicting he history of the region, including one of Baldwin IX, who is pretty big in this part of the world, setting off on his Crusades in 1202, leaving his pregnant wife behind. Baldwin was crowned Emperor of Constantinople, which placed him above the King of France, hence his popularity. However, his pre-eminence was short-lived as he was captured by Bulgarians in 1205 and swiftly disappeared from the history books.

Upstairs is the Council Room, which has an even more impressive stone fireplace than the one below. Dating back to the same period, at its centre is Charles V, Holy Roman Emperor. Either side of him are images representing the seven deadly sins, with idolatry added to provide a symmetrical eight. Below are the potential consequences of these vices. Each sin is depicted by a woman with the exception of sloth, which was clearly a manly vice even in the Middle Ages. At the top of the fireplace are the corresponding virtues.

Leaving the Grote Markt, Griet led me to the banks of the river Lys (Leie) and to the island of Buda – so called because the locals felt it resembled Buda in Budapest. Now the island, which was the industrial part of the city, has been transformed into a dynamic artistic zone, developing a reputation across Europe, especially for contemporary dance and performance art.

Where the central moat separating Kortrijk from Buda meets the city’s ramparts are the magnificent twin Broel Towers. Built as part of measures to defend the city in the 14th and 15th centuries, they are perhaps the most striking examples of the rich architecture abounding in the city.

Part of the reason for the volatile history of Kortrijk lies with its cloth industry. Initially this was highly reliant upon the import of English wool, which was then traded in Flanders.

However, in part due to successive conflicts, such as the Hundred Years War (1337-1453), that affected supply, the merchants of Flanders turned towards flax, from which linen is produced.

Discovering the area to be perfect for flax growing, it soon became the major industry in the area, and the river Lys was called the Golden River, due to the affluence it helped create. The history of the industry, the many uses of flax and its importance to Kortrijk is told at Texture, The Museum of Flax and the River Lys.

Two Churches and a Beguinage

As fellow tourists descended upon the Broel Towers, Griet led me back through the old quarter of the city to Kortrijk’s main churches.

Built for the Kortrijk elite, the 13th Century Church of Our Lady was supposed to house a hair taken from Christ. Built beside it and accessible through the church, the church’s chapel dates back to 1370-3. It was designed as a mausoleum for Louis of Flanders, but as the chapel had not been fully restored after the Battle of Roosebeke, prior to Louis’ death in 1384, he was buried in Lille where he then resided.

Now, the chapel has a most interesting set of murals depicting the counts of Flanders and Dukes of Burgundy up to the French Revolution. If nothing else these show how fashion evolved in the intervening centuries. The church also as a Van Dyck painting of the Erection of the Cross dating from 1631.

Whilst the Church of Our Lady was designed for the entitled, St Martin’s was always for the masses. A chapel originally stood here in the 9th century, but the current church dates to the 1600s, although the main tower is more recent, having been struck by lightning in the mid-19th century. Perhaps its most interesting feature is the 1585 sacrament tower.

Between the two churches lies the Unesco-listed Saint Elisabeth Beguinage that was founded by Joan of Constantinople, daughter of Baldwin IX, in 1238.

Beguines were similar to nuns, only they did not take the vow of poverty, just chastity and obedience. During the Crusades, beguinages were popular places for knights to drop off the wife while they went off doing godly things, and much killing, in the Holy Land.

The beguinage reached its peak in the 17th Century when there were up to 130 beguines living here, partially due to, unlike at a nunnery, no dowry having to be paid before acceptance. Most of the buildings date back to this period. It really is a wonderfully peaceful place to stroll around, concluding at the statue of the last beguine, who died in 2013 at the tender age of 92.

A Belgian Spa and a Fine Dining Restaurant

After so much gentle strolling – really Kortrijk is a highly manageable city – I felt in need of a little pampering.

Fortunately, Kortrijk has an excellent spa in the Park Hotel, situated conveniently close to the railway station. So, I spent the rest of my afternoon wandering from the thermal pools to various types of saunas and steam rooms, occasionally dipping into the appropriately named Ice Room – with a temperature of -30C.

This proved excellent preparation for dinner at Beudaert restaurant, next to St Martin’s Church. If your image of Belgian cuisine is mussels and frites, then think again – although there is an excellent friterie right next to the station. Our dinner at Beaudeart would have graced the tables of London or Paris.

From quite wonderful slowly roasted white cabbage as a starter to the butter and milk crumble for dessert, the meal was exceptional, accompanied by informed yet unobtrusive service. Burned scallops were followed by the most succulent turbot in a Babette’s Feast of a culinary celebration, with the single oyster amuse bouche perhaps claiming top prize.

It was the perfect way to conclude my day in Kortrijk, which was as enjoyable as it was illuminating, and such an easy journey from London. All this, and I didn’t even mention the wonderful Belgian beer.

If you have enjoyed Mark’s travel tales of Kortrijk, why not try his From Beer to Mussels : Things To Do in Brussels?

For a more simple and relaxed dining atmosphere to the phenomenal Beudaert try the cool De 7 Zonden (Leiestraat 22), which has some great healthy options including, on our visit, a tasty spinach soup, and pumpkin stuffed with quinhoa for its set lunch.

The four-star Hotel Damier Kortrijk is located right on the Grote Markt, and makes for a great option. However, if you want a Kortrijk hotel off the main square the Park Hotel Kortrijk, next to the station, has comfortable rooms, an excellent breakfast and the most luxuriant wellness centre.

Lille Flandres station has hourly trains from Lille to Kortrijk. To get to Lille from London, Brussels or Amsterdam take the Eurostar to Lille International station and then walk ten minutes down the hill to Lille Flandres. A Belgian train timetable can be found here.

Things to do in Kortrijk

Visit the official Kortrijk tourism site at www.toerismekortrijk.be for ideas on things to do in Kortrijk, and for Flanders as a whole, visit: www.visitflanders.com. You can book a Kortrijk guide email: [email protected].