As ultimate travel experiences go, a voyage to Egypt ranks right up there with the best, but as Mark Bibby Jackson writes, a Nile Cruise on the SS Sudan ship is no Death on the Nile. 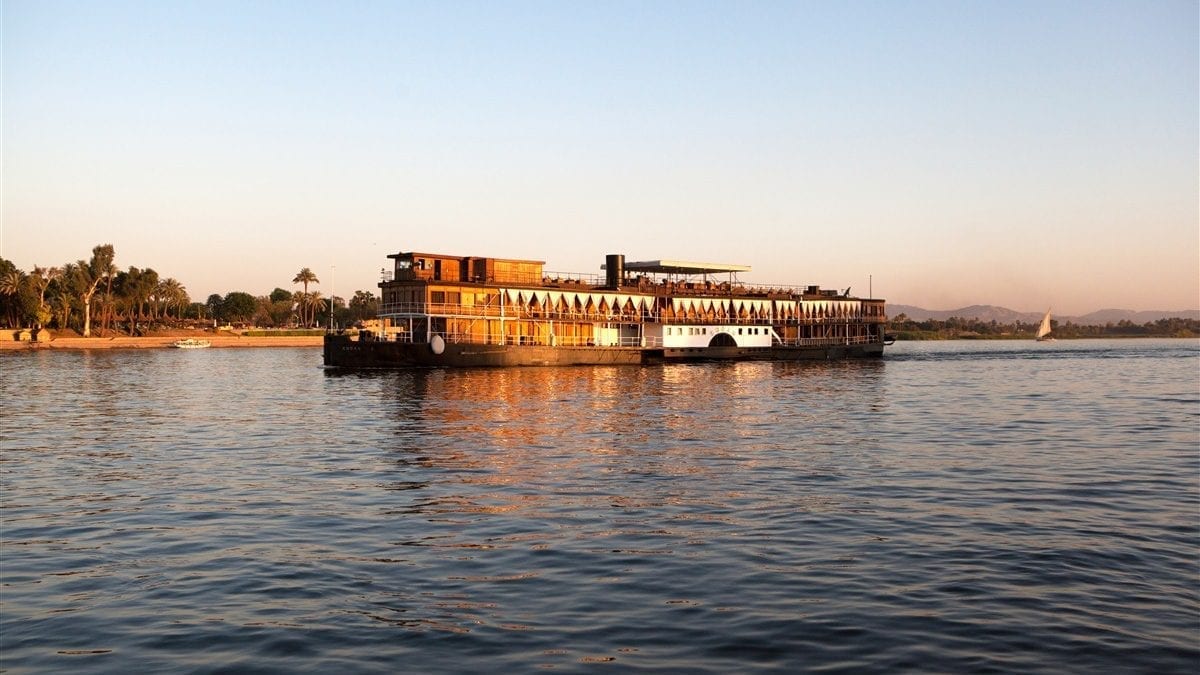 As ultimate travel experiences go, a voyage to Egypt ranks right up there with the best, but as Mark Bibby Jackson writes, a Nile Cruise on the SS Sudan ship is no Death on the Nile.

When I was twenty one my mother sold off the bottom of our garden to pay for a once in a lifetime holiday in Egypt. This might say more about her long-term financial planning than anything else. But the trip is one that will live with me until my dying day.

It was while visiting some of the most amazing treasures of the Ancient World from the Pyramids of Giza to the Valley of the Kings in Luxor that I fell in love with travelling. Then we took flights – and occasional long-distance buses – between the sites, but now you can travel in luxury on a Nile cruise aboard the Steam Ship Sudan.

A Nile cruise takes you back to the sumptuous era of the Belle Epoque.

The construction of the Suez Canal in 1869 opened up the lands of Egypt to adventurous European travellers. The following year Thomas Cook was awarded the franchise to run the steamer First Cataract along the Nile from Cairo to Aswan. In 1880 he received the rights for all tourism-related sailing on the Nile.

It proved an instant success with more than 1,300 tourists taking a Nile cruise in the winter of 1889-90.

History of the SS Sudan Ship

Speed, however, was a drawback. So, between 1911 and 1921 Cook launched a fleet of faster steamers – the SS Egypt, the SS Arabia, and the SS Sudan. This reduced the Cairo to Aswan Nile cruise travel time to some 20 days.

Travellers, from diplomats to heiresses, and businesspeople to archaeologists seized advantage of the golden age of Nile river cruises.

One of the most famous of these was Agatha Christie who sailed aboard the SS Sudan in 1933 with her archaeologist husband who was there on a dig.

Death on the Nile

It was during this cruise that the famous crime novelist was to conceive Death on the Nile, with Hercule Poirot destined to unravel the mystery of who had murdered heiress Linnet Doyle. Coincidentally, a remake of the film is due for release in 2020 with Kenneth Brannagh playing the role of the moustachioed Belgian detective. Although whether he can live up to the wonderful performance of Peter Ustinov in the 1978 version is a moot point.

Unfortunately, the Second World War sounded the death knell of tourism in Egypt, and the SS Sudan lay abandoned until the 1990s when its Egyptian owner unsuccessfully relaunched it with a German tour operator.

Recreating the Belle Epoque on an SS Sudan Nile Cruise

It was not until the new millennium that the directors of Voyageurs du Monde restored the vessel, re-starting Nile river cruises. In 2011, the SS Sudan had a complete overall, renovating the motors to improve energy consumption and adding soundproofing. An organic vegetable garden was also laid out on the banks of the Nile to supply the ship’s restaurant.

Now you can sail aboard the SS Sudan on a Nile Cruise for six days and five nights from Luxor to Aswan or vice versa. Choose from one of the five suites, such as the Agatha Christie suite, where the author lay in bed at night conceiving the intricate plot surrounding Linnet Doyle’s death. Like the adjoining Lady Duff Gordon suite, named after the ethnologist, it has spectacular views of the Nile. There are also 18 cabins.

A sense of the golden era of Nile cruises is created by the warm wooden panelled interiors, gilded and copper bedframes, period furniture and parquet flooring in the cabins. All are named after people who will be forever linked with the history of this great country, including King Farouk, the last monarch of Egypt; Ferdinand de Lesseps, the architect of the Suez Canal; and Howard Carter, the discoverer of the tomb of Tutankhanum, in the Valley of the Kings (or Pharaohs).

The latter is one of the many delights lying in wait for you on a Nile cruise, and which so entranced me in my early twenties.

The cruise takes in the sites of Abydos, the centre of the cult of Osiris; the spectacular temples of Karnak; the temple of Luxor and the valleys of the Kings, Queens and Nobles; Edfu, one of the best preserved of Egypt’s temples; Kom Ombo, dedicated to the Falcon God, Horus, and Sobek, the Crocodile God; and the flooded temple of Philae where you can see a son et lumiere show.

Truly, an unforgettable experience, a Nile cruise is like no other, and fortunately, now you do not have to sell off the bottom of your garden to discover the treasures of Egypt.

An eight-day cruise on the Nile on the SS Sudan with Original Travel starts from £3,700. This includes international flights, and overnight stays in the Sofitel Winter Palace Luxor, and the Sofitel Legend Cataract Aswan. All trips are tailored to your requirements, including optional hieroglyphic and Egyptian cookery classes, as well as a side trip to the quite amazing temple of Abu Simbel. Further details of a SS Sudan holiday can be found here.