Elinor Goodman drinks in Cuban music on her Havana holiday, discovering that both music and dance are deeply embedded in both Cuba's culture and tourism. With the coronavirus COVID-19 pandemic affecting most travel plans at the moment, Elinor Goodman  suggests that while planning your next trip you might consider drinking in Cuban music on a Havana holiday. On her trip she discovered that music and dance are deeply embedded in both the culture and tourism of the Latin American country.

Walk through the streets of Havana, and out of bars and tiny courtyards comes the thrum of drums, the click of the wooden claves used to beat out the rhythm and the blaring of wind instruments. In a garden, lit by coloured lamps, a young man and woman perform a highly sensual dance of tag to the impatient beat of the rhumba. The man lunges towards the woman, as if trying to grab her between the legs as she, more provocatively than coyly, fends him off with a scarf.

This is Cuba’s heritage exploding into musical life. The rituals and rhythms of the west African slaves are fused with the strings and swirling skirts of the flamenco introduced to Cuba by the Spanish colonisers.

Cuban music and dance : an expression of culture

Initially, I sit on a step tapping my feet in a typically inhibited English way. Then, as other members of the crowd begin to dance, I find myself drawn in by two Afro Cuban women who rotate their hips and flap their arms like chicken wings. Without a drop of rum to drink I am utterly intoxicated. After about half an hour I collapse onto a bench but the dancing goes on for hours.

It is easy to sound cllchéd about the importance of music in Cuba. But it is an integral part of the culture, combining religion and history.

The result is Santeria, a religion not unlike that practiced in Brazil and other former slave colonies, which gives African names to Catholic saints. And this in turn influences the music of Cuba, as each African god had its own rhythm. In all there are about 20 of them in Cuba, each with its own rituals based on the forces of nature.

Dancing on the streets of Havana

Outside my apartment I see a woman, dressed entirely in white apparently throwing a plastic bag of rubbish into the sea. In fact it is full of food and is an offering to the sea god. As it is swept away she shakes out a rhythm with maracas to bless it on its way.

Across town, the Callejon de Hamel is decorated with surreal murals, and shrines to the orishas of Santiera. Around the images of the gods are placed offerings and statues made up of old typewriters and, in one case, a bright blue painted cash machine on a pole. It is as if one of the cargo cults from the pacific islands has washed up in Cuba. But in this street, another aspect of Cuban culture, surrealistic art, has merged with folklore.

The streets are lined with brightly coloured mosaics of fantastic beings, and the seats are made of baths sliced in two. At midday on a Sunday, the street is closed off and a band blasts into action. First young men compete with each other in the Cuban version of breakdancing, called Columbia, which is the fastest style of the rumba. Then, men and women taunt each other in the overt form of the rumba known as Guaguanco. Finally, older couples dance a slower, more elegant type of rumba in ballroom hold.

This performance is partly put on for tourists who are vital to the Cuban economy. Tourist numbers are down since President Trump imposed restrictions on US residents travelling to Cuba, but music tourism is growing, not just rumba but numerous other genres, such as son, danzón and bolero.

Many of them use trumpets and other elements of jazz, which was hugely popular in the nightclubs run by the mafia before the revolution. President Fidel Castro encouraged Afro Cuban music as a way of expressing the island identity, but he closed down the night clubs, which he saw as part of a corrupt American culture.

Now, Cuba has developed its own style of jazz, again fusing musical styles from abroad with that of the former slaves.

I was on a Cuba jazz tour of Havana timed to coincide with the annual Havana Jazz Festival in February, but similar tours take place throughout the year. Every day for a week, we would go to one or two jazz concerts, ranging from internationally known performers, such as David Liebman, and Trombone Shorty to street groups.

The final night Omaro Portuondo, one of the original singers from Buena Vista Social Club – the film that put Cuban music back on the international stage – and who is now in her 90s, sang. With her extraordinary voice, once she got into her stride, she was treated like a national hero.

One afternoon we visit a secondary school which specialises in music. A big band, made up of kids of 14 to 16 put on an astonishingly accomplished performance for us with a 15-year-old singer belting out Summertime. Throughout the Castro period, the government invested in musical education, mainly classical music and ballet, but also some Cuban styles too, and the tradition remains with children as young as seven singled out for specialists schools like this.

Another day, the six Americans on the tour, and myself, all well over the age of athletic dancing, are given a lesson in Cuban salsa. We are each paired up with a graceful youth who manages to coax out of us some faint resemblance of a dance step, albeit with our eyes firmly focused on our feet. I try not to look at myself in the mirror as I suspect my efforts would make John Seargeant’s performance on Strictly Come Dancing look polished.

I bump into a British music producer, Toby Hough, who brings Cuban music acts to the UK including Carmen Cubana which I saw at the Peacock Theatre in London. He invites me to watch a Cuban ballet company, Rakatan, rehearse in a room in what once must have been an elegant town house but is now, like so many buildings in Havana, crumbling.

I sit there with a huge smile on my face as 14 dancers inhabit the soul of the sea god, Yemaya. Graham Greene wrote in Our Man in Havana that beautiful people seemed to come off a production line in Cuba, and that was certainly the case in this company.

In some ways Cuba hasn’t changed much since those pre-revolutionary days of which Greene wrote. There is a sort of faded grandeur about the place. Many buildings are partly falling down, and there are still electricity cuts of the kind that plagued Greene’s hero, as he tried to sell vacuum cleaners. People still drive cars dating back to the l950s – and not just the pear-drop coloured, open topped taxis which have become a national icon. The American trade embargo, means it is virtually impossible to import new cars, and huge ingenuity goes into keeping the veteran Chevrolets on the road.

Following President Obama’s easing of the trade restrictions, Trump has tightened them up again. US cruise liners can no longer stop in Havana. American tourists have to promise in advance not to support the work of the Cuban Government unless the project is on a permitted list. Government hotels are banned, for example. They also have to keep a record for five years of how they spend their money.

The Americans in our group were all Democrats and attributed nearly all the problems of the Cuban economy – and there are many – to Trump’s embargo. I myself concluded that while the embargo undoubtedly causes huge problems Cuba’s economic problems are slightly more nuanced than that. The country still operates a dual currency with two kinds of pesos – one convertible and one not – and, despite recent changes, it is still essentially a command economy, though it has been liberalised since Fidel stepped down.

What is extraordinary is how in the circumstances, young Cubans get round the embargo, and manage to look very fashionable despite the shortages in the shops. There are queues everywhere, and very little choice, but visitors to the States come back with suitcases full of goods which they sell. Relatives in Miami are a key to prosperity.

Is Cuba tourism the future?

Tourism in its turn is regarded by the state as vital to the Cuban economy.

Millions of pesos have been spent renovating Havana old town, which dates back to the 16th century. The state has also invested heavily in culture – I have never been in a town with so many galleries and museums. Foremost amongst them is the Museum of the Revolution which gives a fascinating Cuban perspective on relations with “the Imperialist lackeys” of the United States.

The installation of Russian missiles in a Cuba, which took Russia and the US to the brink of war in the l962, is only mentioned in passing as an entirely logical response to American aggression. I feel rather smug as the British aren’t berated for their part in Cuba’s history, and elsewhere in the city Winston Churchill is lauded as a cigar smoker.

Next door to the Museum of Revolution is, the Palacio de Bellas Artes which has the most wonderful collection of Cuban surrealists, while just outside the city, the artist Jose Fuster, has covered what was a fishing village with naïve mosaics in the style of Miro and Picasso. Now called Fusterlandia, it’s a kind of miniaturised version of a surrealist Disneyland with rather better souvenirs.

For further inspiration, read Street Art Rumba and Che: Things to Do in Havana Cuba.

I went to Cuba with a small Cuban-based tour company, run by an American drummer, called Havana Music Tours. It was quite expensive – around £2,500 without flights for six nights – so tended to attract older travellers who could afford it. Going independently might have been cheaper though dinners, and transport which is very expensive, were part of the deal. We also had access to the best concerts, which would have been difficult to arrange. And despite being technically on a package tour, I still felt I was somewhere exotic.

Next time, if I can get the memory of the jet lag after a 14-hour flight out of my head, I’m going to explore the rest of the island.

If you wish to follow in the dancesteps of Elinor, then you could contact [email protected]. Please heed all travel advice before taking your next trip, and when you do go take all the necesary health and safety precautions. 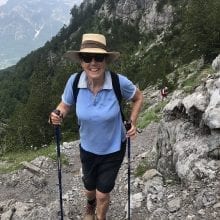 For 30 years Elinor was the political editor of Channel Four News. She retired early partly to indulge her love of travel. She is divorced and usually travels on her own, sometimes joining a small group but always maintaining her independence where possible. She tries to keep fit by riding and walking her dogs.