Mark Bibby Jackson takes an intimate journey around the David Hockney : Drawing from Life exhibition at the National Portrait Gallery in London. 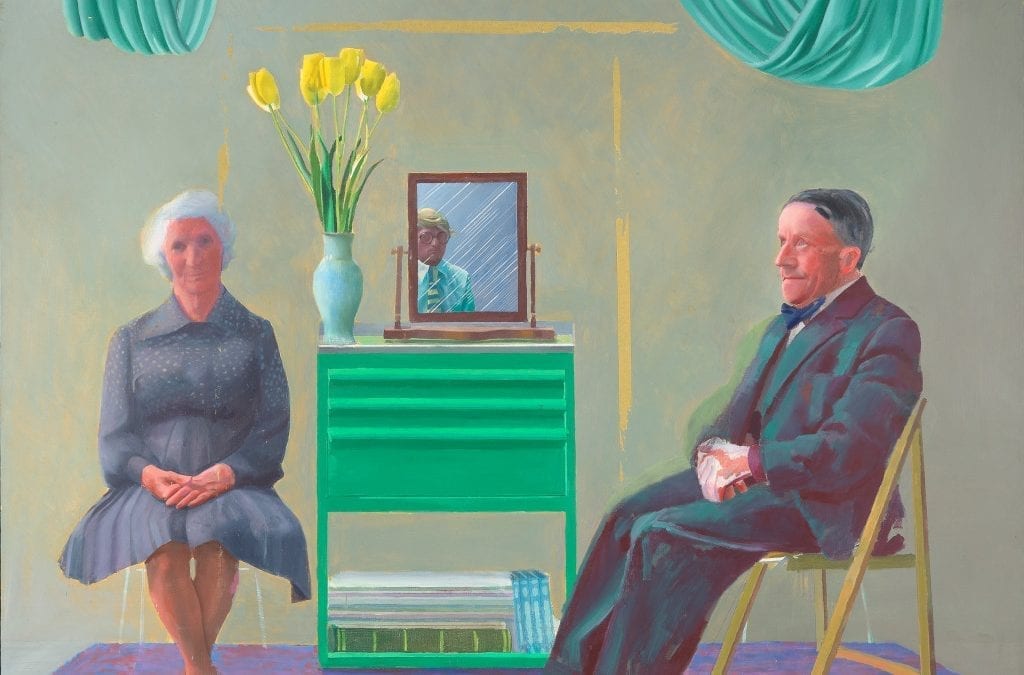 DUE TO CORONOVIRUS COVID-19, THE NATIONAL PORTRAIT GALLERY IS CLOSED UNTIL FURTHER NOICE.

Prepping for his trip around Hockney Country in the Yorkshire Wolds, Mark Bibby Jackson takes a shorter and more intimate journey around the David Hockney : Drawing from Life exhibition at the National Portrait Gallery in London.

David Hockney: Drawing from Life is the first major exhibition devoted to one of Britain’s foremost contemporary artists, in more than twenty years.

It was worth the wait.

Right from the off the exhibition explores intimate relationships. My Parents and Myself features his parents – she a vegetarian Methodist, he an anti-smoking campaigner – sitting opposite each other with Hockney appearing in a mirror. She is staring at us, while his father is at an angle. The eyes are blue, as always.

With more than 150 works on display from the 1950s to the current day, we are guided on a journey through the artists life and career – a most intimate one.

The landmark exhibition features new portraits and previously unseen early works, including drawings for A Rake’s Progress (1961-63), which were inspired by William Hogarth’s work of the same name. There are also sketchbooks from Hockney’s art school days in Bradford in the 1950s.

Of particular interest is the way that Hockney has always experimented with new techniques, and non-traditional drawing equipment, such as the Polaroid camera, and apps for iPhone and iPad.

One such experiment is a collection of iPad drawings of Hockney himself made in 2012, when he created a digital self-portrait each day for 20 days, inspired by Rembrandt.

In the same room is a wonderful portrait of the artist commissioned by Van Gogh Museum that captures the man, the cigarettes and a somewhat mischievous smile.

Despite his experimentation Hockney always returned to familiar subjects with three people – in addition to himself and his mother, Laura – featuring throughout his work.

Celia Birtwell, Gregory Evans and Maurice Payne are friends that Hockney has drawn throughout his career. The exhibition devotes a room to each one, to show how Hockney has explored the evolution of their faces with time.

Celia is often seen as Hockney’s muse, and walking through the room devoted to his drawings of her is as if entering their personal space. One sketch of her taken in Hollywood in 1972 is quite mesmerizing.

The next rooms are devoted to, in turn, Gregory and Maurice, before the exhibition concludes with a series of new drawings of all three taking last year. There is a sense of a conclusion to the work, but is it?

At the end of the exhibition you feel as though guided on a voyage through the creative mind of one of the greatest artists of the last 50 years. Let’s hope the journey is far from over.

Runs at the National Portrait Gallery, London until 28 June, 2020.