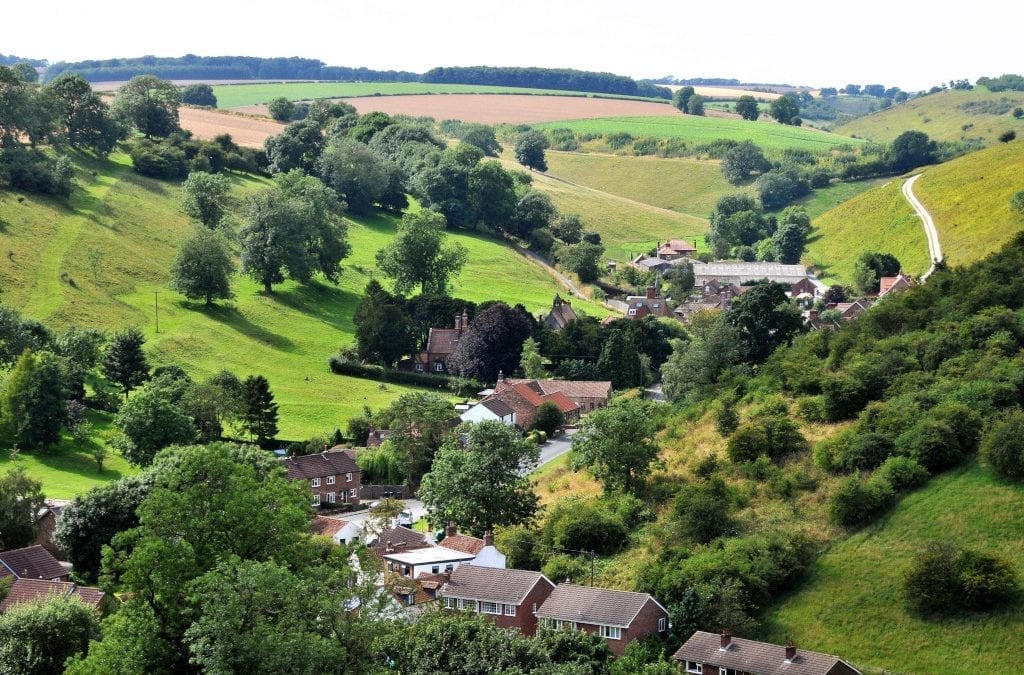 Dreaming of enjoying those wide-open spaces once again? With so much uncertainty regarding overseas travel, the UK is set to be a popular choice when we are eventually allowed to travel again, but thankfully England has some spectacular open spaces where social distancing comes naturally.

And for many of us, the chance to get outside, feel free again, and celebrate our revitalised love affair with nature and all things green, will be just the tonic after lockdown. So, here’s a round-up of some less well-known spots for a get-away-from-it-all, natural break.

Wander the Wolds with Hockney, in Yorkshire

There can be few places where you can be surrounded by a living canvas immortalised by Britain’s greatest living modern artist. Yet The Yorkshire Wolds offer precisely that. Follow in the brush strokes of artist David Hockney – who, for many years, called East Yorkshire home – on a self-guided tour of Hockney Country. This offers the chance to explore the real-life inspirations behind some of his most famous landscapes, including the site of ‘Bigger Trees’ – his largest work of 50 canvases showing a group of skeletal trees – around the village of Warter; and Thixendale, where he created ‘The Three Trees at Thixendale’, a series of paintings reflecting changing seasons. Another favourite location was Woldgate, an old Roman route, a few minutes drive from his Bridlington home at the time.

Or, put yourself in the picture with a virtual art museum: but one that has nothing to do with armchair travel. Head off along the Wolds Way and unlock Yorkshire’s hidden art on an innovative virtual art gallery with ‘Secret Art’, which uses a free app to allow walkers to discover artworks and poetry ‘floating’ in the landscape. For more information, click here.

Head south and there’s more inspiration to be found in the Lincolnshire Wolds, this time from the world of poetry. Retrace the footsteps of one of the most famous poetic voices of the Victorian age on the Tennyson Trail, weaving around Lincolnshire’s rolling landscapes that inspired Alfred Lord Tennyson, who was born and brought up in the county.

One of England’s great unexplored landscapes, the gently rolling hills, wooded valleys and chalk streams challenge misconceptions of Lincolnshire being flat, providing leisurely walks to serious treks as well as some great cycling. From the village of Somersby, where he was born, and spent the first 28 years of his life, the trail offers a chance to stroll through the countryside that inspired him. While at the picturesque village of Tetford is the 16th century White Hart Inn, which served as the poet’s local, where – restrictions allowing – you can even sit in the oak settle used by Tennyson himself. For more information, click here.

The ‘other’ Peak District

Mention The Peak District National Park and most people will think of Derbyshire, but Britain’s first national park also stretches over the border into neighbouring Staffordshire. The Staffordshire Moorlands make up to a third of the National Park with views ranging from rocky outcrops to rolling hills and luscious valleys, along with plenty of peaceful villages, and the historic market town of Leek. But there’s more to discover in this often under rated county.

The Roaches – dubbed the gateway to Staffordshire’s Peak District – is blessed with soaring rock faces and heather-covered hillsides, and one of Staffordshire’s most photographed landscapes. Protected for its wildlife and rare wild habitats, try the less visited northern section, with its sheltered woodlands and the stunning rocky chasm known as Lud’s Church.

Strap up your walking boots – or try a little pedal power – and explore The Manifold Valley, a deep limestone valley of steeply wooded slopes and towering rock pinnacles, with the eight-mile Manifold Track following the route of a disused railway. Climb the steps to Thor’s Cave, one of the most spectacular sights of the valley at 250 feet above the track. The magnificent views are well worth the climb, while the cave itself is believed to have been home to cavemen 10,000 years ago. For more information, click here.

Home to not one, but two National Parks, and criss-crossed with 3,000 miles of footpaths, bridleways and byways – not to mention a coastline offering views across the Solent to the Isle of Wight – Hampshire certainly offers plenty of green space to get away from it all.

The South Downs National Park stretches from Winchester in Hampshire to Eastbourne in East Sussex. Britain’s newest national park, it offers peaceful countryside with rolling hills and panoramic views and plenty of walking routes, including railway lines, which have been converted into trails as well as its most famous route, the 100 mile South Downs Way.

Meanwhile, the New Forest National Park – first created in 1079 as a hunting area for William the Conqueror – is home to around 4,000 ponies, cattle and deer who roam freely amongst the ancient woodland. With more than 140 miles of tracks and footpaths, there are long distance routes, short walks and easy to follow signed routes. But there are some surprises too, such as the much less well-known, but equally picturesque landscape of the Test Valley, where the River Test meanders through ancient woodlands, tranquil water meadows and rolling chalk hills.

Within the South Downs Park, the Meon Valley is another hidden gem, following the shallow and crystal clear river, rich in wildlife. Or how about a trip to Little Switzerland? Ashford Hangers, in East Hampshire, has the affectionate name thanks to its beech woodland, tree lined sunken lanes, chalk hillsides and views of the surrounding countryside.

Who would have thought, just a few miles from the bright lights and hustle bustle of one of Britain’s most popular ‘bucket and spade’ family seaside resorts, lies a coastline of wide open beaches and wildlife rich reserves.

Best-known for its popular seaside resorts, Lincolnshire’s less recognised natural coastline often comes as a surprise. In fact, perfect for bird watchers and nature lovers, Lincolnshire’s Natural Coast is one of its best secrets. Just 10 minutes from Skegness, Gibraltar Point Nature Reserve is an internationally recognised wildlife haven for seabirds. Stretching along a dynamic stretch of unspoilt coastline running southwards from the edge of Skegness to the mouth of the Wash, this year-round reserve is known for its impressive views and sheer scale and diversity of wildlife. Started in 1949, ‘Gib’ as it is affectionately known, was one of the earliest of Britain’s official Bird Observatories.

Elsewhere along the natural coast are long, sandy beaches, just right to find a quiet spot or for a long walk along the coast, including Anderby Creek – where in normal times you can also take a seat at the Cloud Bar. It may not serve alcohol, but this bar nestling amidst sand dunes is the UK’s first purpose-built cloud viewing platform, complete with ‘Cloud Menus’ and swivelling mirrors to gaze skywards and reflect. And recently, the National Trust has revealed plans for a new all-year nature reserve along this natural coastline – its first coastal land in the Midlands – that will protect wildlife and create a new visitor experience. For more information, click here.

Luxury Mexico Travel to Die For