Mark Bibby Jackson ventures to Yorkshire to stay at Crathorne Hall, an Edwardian stately home, with incredible views and a rich history, ideal for a UK staycation. 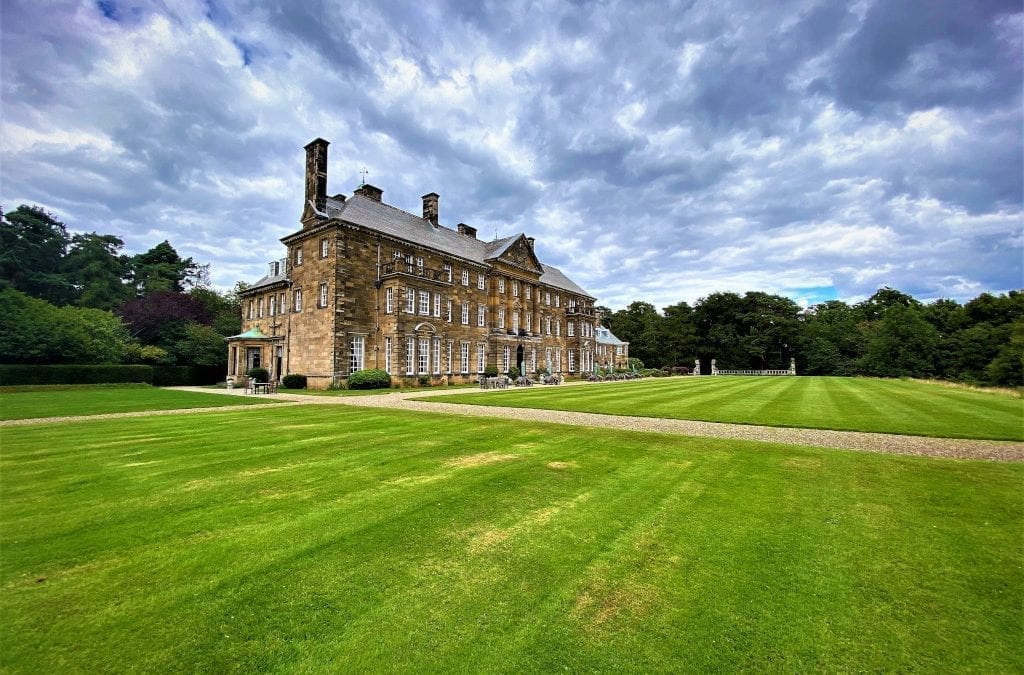 Mark Bibby Jackson ventures to Yorkshire to stay at Crathorne Hall hotel, an Edwardian stately home, with incredible views and a rich history, ideal for a UK staycation.

Checking into Crathorne Hall hotel I feel as though I am entering a building full of history. It is like something out of Jane Austen or perhaps given its Yorkshire setting a Bronte novel. So, I am surprised to discover that it was only built at the start of the last century – between 1903 and 1906.

The largest country house built during the reign of Edward VII, in many respects Crathorne was the last of a dying breed. Two World Wars put paid to such bold statements of opulence, now condemned to period costume dramas and special weddings.

Built for James Lionel Dugdale by George Trollope and Sons, out of stone from a quarry near Whitby, to designs by Sir Ernest George, Crathorne Hall had 115 rooms, 41 of which were bedrooms. At its peak there were 26 live-in servants.

The Dugdale family made their money out of the Lancashire cotton trade, and had originally bought the property in 1844 for shooting. The grandiose scale of the building is thought to reflect the family’s ambitions to enter politics, and if so it proved a sound investment. For Thomas Dugdale, the son of James Lionel, became a Conservative MP in 1926 and later the First Lord Crathorne. Many senior Tory politicians including Eden, Macmillan and Douglas-Home have stayed at Crathorne Hall.

However, the history of Crathorne is not simply one of politics, as Thomas’ wife Nancy was a talented painter. Some of the paintings adorning the walls of Crathorne Hall are by her hand. Nancy also devoted much of her life to restoring the Theatre Royal in Richmond, hosting many of the performers who featured there. Dame Edith Evans and Dame Sybil Thorndyke are just two of many famous thespians who have stayed at Crathorne, as well as the whole Cambridge Footlights review in 1963, including John Cleese, Bill Oddie, and the late Graham Chapman and Tim Brooke-Taylor.

A Room with a View

Approaching the entrance of the property you do not quite get the grand sense of the magnitude of Crathorne Hall hotel, as its most striking feature is the southern façade with its wonderful views across the Leven Valley towards the North York Moors.

I am most fortunate to be given the Maltby room, which has a small terrace facing in this direction. In the afternoon a colony of swifts take it in turn to dive bomb me as they painstakingly feed their young. It is a quite wonderful site only briefly interrupted by the arrival of some birds of prey, we think might be kestrels.

Before diner, I take the opportunity to walk around grounds along the Woodland Walk, which takes me past the bee hives where local honey is produced.

Chris Porter, the general manager of Crathorne Hall hotel, which is part of the Hand Picked Hotels Collection, is keen to impress the measures they have taken in order to re-open the hotel safely on 4 July.

Upon arrival our temperatures are checked. Fortunately we pass the 38C test. Otherwise we would be allowed 15 minutes to cool down before taking a second test. If we had failed that we would not have been allowed in the building.

Porter assures that Hand Picked will provide full refunds, or alternative bookings, for anyone who either fails the test or has to cancel their booking at the last moment for COVID-19 reasons. The safety of guests is even more paramount in the new normal.

The temperature check is by no means the only COVID-19 measure introduced at Crathorne Hall. There is a one-way system, which in truth I found a little confusing, and social-distancing measures have been introduced in the main dining room, the Leven Restaurant.

It is here that we dine after an aperitif in the Nancy Tenant Bar and another on the terrace overlooking the spectacular main lawn.

Dining in the Leven Restaurant

The extra space created by the COVID-19 measures ensures that our conversation remains as private as is intended. Yet the incredible friendliness of Porter and his team avoids the sense of stuffiness that can pervade high dining restaurants.

Our meal would have graced the table of Nancy Tenant and Lord Crathorne. The Crathorne Hall menu was varied yet informal. Our starters were a Yorkshire ham terrine served with a black pudding scotch quail egg, which was quite incredible according to my dining companion, while my salt and pepper squid was crisp on the outside and succulent within.

This we followed by a tuna steak and Whitby crab linguini. Both were excellent, although the latter was the favourite of both our table and most of the staff and other guests according to feedback. However, la piece de la resistance was the assiette of coffee for dessert. Seldom have I been so impressed with such a conclusion to a meal, combining wonderful flavours – a syrup sponge that resembled a rum baba, and a coffee brulee – with delicate textures and imagination.

It really was a great success, and a wonderful way to conclude a great day, a perfect UK staycation.

Things to Do in the Area

One of the great features of staying at Crathorne Hall Yarm is the vast variety of delights on your doorstep.

The North York Moors are visible in the distance. A short drive means you can scramble off in search of Heathcliff and Cathy, or visit Whitby, its wonderful fish and chips and spectacular ruined abbey.

Even closer, the coastal town of Saltburn-by-the-Sea has a vast expanse of clear sand that could not become congested even on the sunniest of Bank Holiday Mondays.

Further north, but still an easy drive is Hadrian’s Wall and the Northumberland Coastline with atmospheric Lindisfarne and the puffins of the Farne Islands.

Finally, if you wish to venture across the Pennines to the land of the red rose, the Lake District is also easily reachable by car, or for the really athletic by bike.

It is also a very popular wedding destination. Now that the government has relaxed its wedding regulations somehwat, perhaps you might consider contacting the team at Crathorne Hall for your big day.

The hall and its wonderful lawn are extremely popular with locals who often come here to take afternoon tea, or perhaps an early evening drink as the sun is setting with the swifts behind the horizon.

All photos except where stated by Mark Bibby Jackson.