Roger Hermiston and Eileen Wise go on a Suffolk staycation at Kesgrave Hall hotel to discover a most relaxing place full of history and a close encounter in Rendlesham Forest. 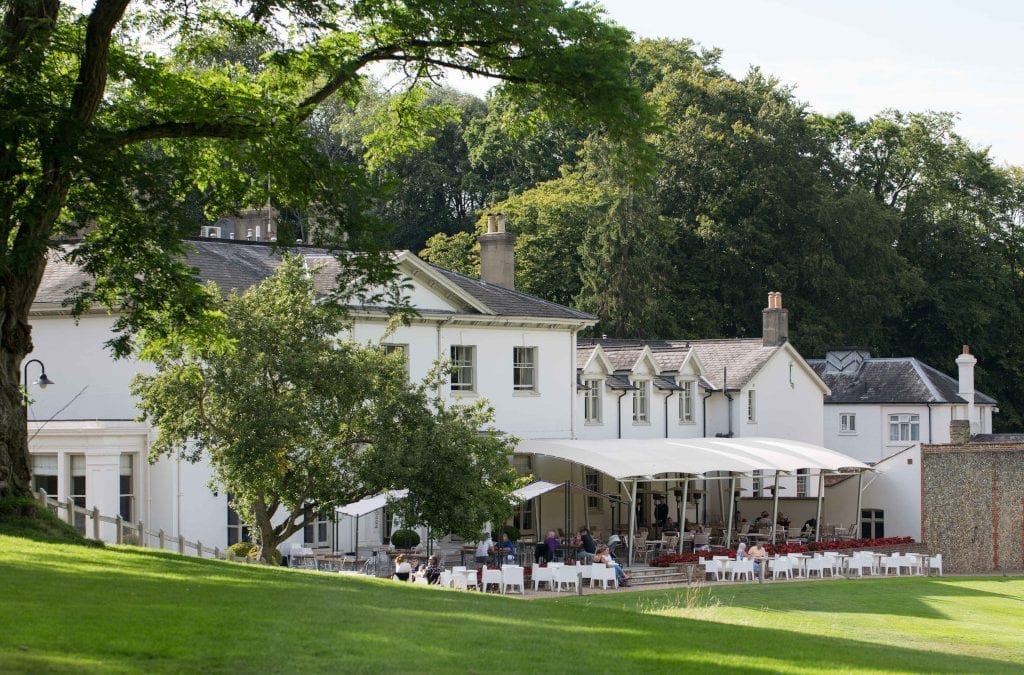 Despite abhorring the word, Roger Hermiston and Eileen Wise go on a Suffolk staycation at Kesgrave Hall hotel to discover a most relaxing place full of history and a close encounter in Rendlesham Forest.

It’s an ugly word, staycation. Even worse is its close relation, the lesser-used ‘nearcation’. Certainly two of America’s inferior linguistic imports. But the sentiment, that you should explore appealing, often overlooked, holiday destinations closer to home, is one with which we can all surely agree.

Post-lockdown, for our first mini-break in five months we sought a quality country house hotel where we could be comfortable with the social distancing, and which would be in striking distance of interesting places to visit.

The Heart of Suffolk

Kesgrave Hall Suffolk, five miles from Ipswich and three from the pretty market town of Woodbridge, and also within range of the attractive coastal towns of Aldeburgh, Southwold and Orford, fitted the bill admirably. This handsome four-star Grade II-listed Georgian house, which sits in expansive 38-acre grounds, has adapted itself nimbly and seems to be doing as well as anyone can in the hospitality industry in this strange new world.

It helps that its brasserie restaurant has a splendid, spacious terrace where families and other ‘bubbles’ can eat on tables kept well apart. It helps too that the terrace overlooks a huge, manicured lawn, where boisterous children can let off steam while parents dine, and across which dog owners can stroll. Essentially, Kesgrave Hall has both ample indoor and outdoor space, which is vital in these times.

Space alone is not enough, however. A memorable hotel should have a fascinating history, comfortable rooms, good food and engaging staff. Kesgrave Hall has all of these.

First, a little of its history. To walk in through the central Roman Doric portico porch with its twin columns tells you that it was built in the grand style, in 1812 – by a wealthy landowner and former MP, William Cunliffe Shawe. Mr Shawe never actually lived in the Hall but gave it to his son Robert, who quickly became a pillar of the local community and followed his father into parliament as MP for East Suffolk.

The Hall changed hands quite a few times in the next hundred years, with the Mayor of Ipswich Philip Wyndham Cobbold – of the well-known Suffolk brewing company Cobbold and Co – residing there up to and during World War 1.

Then in World War 2 Kesgrave Hall wove itself into Suffolk’s rich aviation history when it provided a billet for airmen from the United States Air Force’s 359th Fighter Squadron, engaged in dangerous bombing missions over Europe. Those men were based at nearby RAF Martlesham Heath (which closed in 1963); in all seventy-two American aviators lost their lives while serving there, and their sacrifice for the Allied cause is remembered on the war memorial on Barrack Square in the village of Martlesham.

The aviation connections to the area do not end there. In the village of Martlesham Heath there is the Douglas Bader pub, named after the renowned legless fighter pilot who inspired the epic film Reach For The Sky. The great man himself opened the hostelry in 1979, and a collection of WW2 photographs and memorabilia – including a large aircraft propeller – can be found around the bar.

Also nearby is the former RAF Woodbridge, closed as an air base in 1993 following vital work in the Cold War, but still used by the Ministry of Defence (until 2027) for exercises by the army. Here, in late 1980, American officers observed extraordinary goings in nearby Rendlesham Forest which have been the stuff of legend ever since. But more of that later.

Post-war, Kesgrave Hall principally served as a series of boarding schools, five in all, including Kesgrave School Hall (1976-93), an establishment for boys with strong academic ability but emotional or behavioural problems. Then in 2007 the Milsom Hotel group – already established in the area with a quality hotel, Maison Talbooth, and fine dining restaurant, Le Talbooth, Dedham, Essex – bought the building, and working with the Hills construction group, opened it as a hotel in April 2008.

Today the hotel comprises 23 bedrooms, restaurant and bar, and an adjoining building, The Hangar, specially designed as a wedding venue with silk-lined walls and leather sofas under a black starlit ceiling. Obviously the latter is currently mothballed.

We were lucky to stay in one of the ‘top’ rooms – the spacious Room No 1, in fact. It had a contemporary feel, decked out in relaxing colours of grey, black and white. The bed was king-sized and supremely comfortable, as was the large zebra-covered sofa (hopefully it was not the real animal). A large, classic bathtub and an impressive walk-in shower were used to much satisfaction.

A television with plenty of channels (including sport) might have proved tempting, but we were content to immerse ourselves in our novels Utopia Avenue and Paris Echo while making use of the tea-making facilities – an essential, if sometimes overlooked, ingredient in a successful hotel room.

Served by young, willing waiters and waitresses, we thoroughly enjoyed our meals in the restaurant, which boasts two AA rosettes. We took a particular liking to the delicious home-made hummous and taramasalta with warm pitta beard, which became a regular starter. On the main Kesgrave Hall menu, the favourites were the pea and shallot tortellini with goats curd and summer truffle, and the pan-fried Scottish salmon fillet with roasted cauliflower mussel and samphire – usually washed down with a bottle of Pinot Grigio.

These days visitors to quality country house hotels expect to see a spa – and finally, after the untimely interruption of Covid-19. Kesgrave Hall was able to oblige on July 20 this year. Our own experience of the Milsoms £2 million investment was that it is certainly money well spent.

The spa is in the grounds of the hotel, a short walk up the drive from the main house and nestling quietly amongst woodland. Open-planned, bright and airy, the 4,000 square feet have room for five treatment rooms inside, and a hot tub and a sizeable south-facing wooden deck outdoors.

After a warm welcome, we were ushered into separate rooms where we more than willingly succumbed to a full body massage, the ministrations of our accomplished therapists bringing new life to legs, arms and shoulders weary after that morning’s exercise.

That exercise had taken the form of the three and half mile ‘UFO trail’ deep into nearby Rendlesham Forest, during which we were invited to throw open the shutters of our imagination and try and imagine the woods in the eyes of the American servicemen who noted some very strange events here in the small hours just after Christmas 1980.

We were no strangers to the world of UFOs, having visited Roswell on our New Mexico road trip, scene of a supposed alien landing in the late 1940s. But Rendlesham Forest has occupied a prime place in the hearts of UFO watchers, primarily because the observants were naturally sceptical air force officers.

Lt Col Charles Halt, deputy commander of the RAF Woodbridge base, filed a famous report on January 13, 1981 about the strange things he and his security policemen had seen and found a few weeks earlier. It has since spawned hundreds of articles, half a dozen books, and numerous TV documentaries.

Halt described, “a strange glowing object … metallic in appearance and triangular in shape …. {which} illuminated the entire forest with a white light”. The object, perhaps (Halt’s men thought) a craft of some sort, thirty feet across and twenty feet high, “had a pulsing red light on top and a bank of blue lights underneath …. and maneuvered itself through the trees and disappeared”. The following morning Halt reported detecting large amounts of radiation – ten times the normal background level – in the forest.

A walk in Rendlesham Forest is an uplifting experience in itself, as you wend your way along pathways surrounded by beautiful conifer and broadleaf trees like oak, birch and birch, and passing open heathland and wetlands. The only concrete monument on the walk to that early morning sighting in 1980 is a grey replica of the ‘craft’ two-thirds of the way round – a great plaything for clambering children.

Was what the American airmen saw that night the flashing beam of the nearby Orford lighthouse? It was a nervous moment in the Cold War, so perhaps it was connected to Russian surveillance? As the day is long, the speculation will continue. For us, sceptics at heart, it was merely an extra dimension to a lovely walk on a calm, bright late summer’s day.

It was the end of a magical few days in the Suffolk countryside. We left Kesgrave Hall restaurant, full with lunch guests taking advantage of Rishi Sunak’s ‘Eat Out To Help Out’ scheme, to make the hour-long trip home, refreshed and with our imaginations stirred.

Standard rooms from £130 per night. Check the website for special offers like midweek spa breaks £260 per person which includes one night’s accommodation, half a day in the spa with treatments, breakfast, lunch and dinner.