On a UK staycation at the Crown and Garter Inkpen, Mark Bibby Jackson discovers great food, walks, gardens, and the Bombay Saphire Distillery. 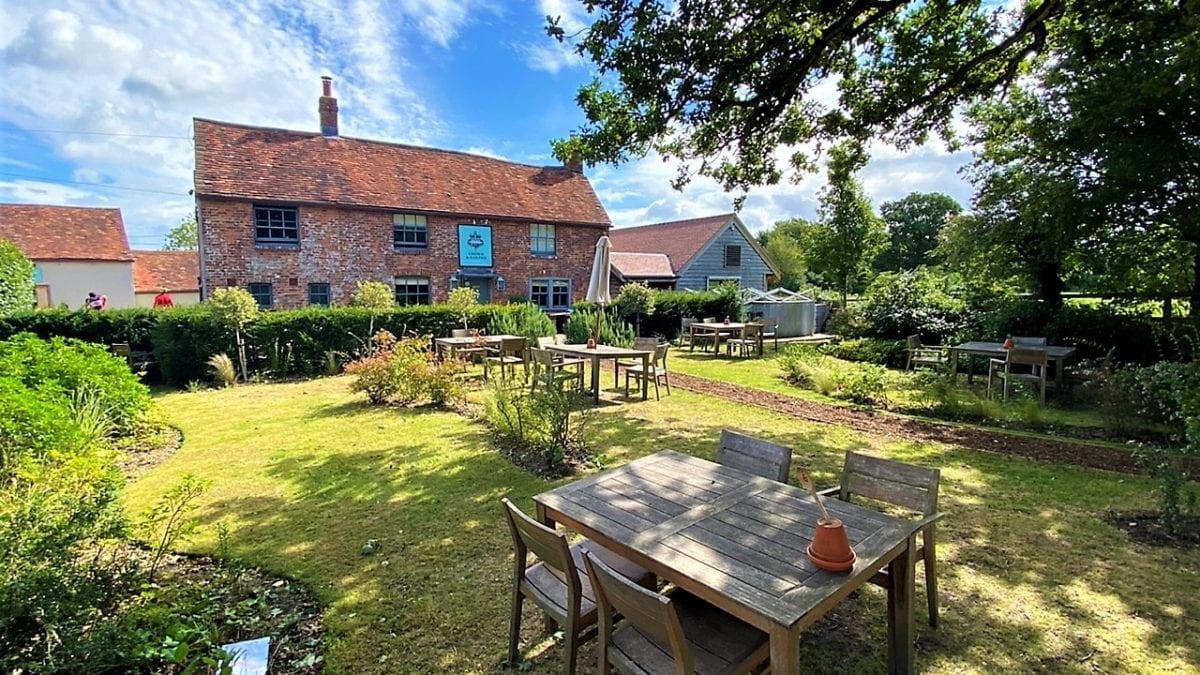 Mark Bibby Jackson discovers Britain’s largest pear tree, the home of Bombay Sapphire and a feast worthy of Queen Victoria on a UK staycation at the Crown and Garter Inkpen, an hour and a half’s drive from London.

One of the advantages of the current situation, especially with the ever-changing UK quarantine list, is the opportunity it affords you to explore places you had never previously considered visiting. I had never even heard of Houghton Lodge yet alone contemplated travelling there on a mini-break from London.

A Stroll Around Houghton Lodge Gardens

The Grade II*-listed Houghton Lodge dates back to 1790 and is thought to have been designed by John Plaw. It is considered by many, not least current owner Sophie Busk, to be the finest example of Cottage Ornée, a picturesque Gothic mode of architecture much in vogue at the time.

Houghton Lodge also has the largest pear tree in the UK, Sophie explains to me as she escorts me around her wonderful gardens. Some 54 metres wide, the pear tree is probably 100 years old, although the wall that it rests against predates both it and the lodge, although the latter only by a few years. Apparently, it is the finest example of a chalk Cobb walled garden in the country.

If this all sounds like a surfeit of superlatives, Houghton Lodge Gardens really deserves them. Sophie has devoted the past five years, since she took over running the gardens, to oversee a total revamp. As we continue our chat I realise that this truly is a labour of love. The gardens contain 120 different rose varieties, as well as 32 different species of apple trees, in addition to the pear trees, the peacock garden, water meadows and woodlands.

Sophie then leads me through the walled gardens, past the peacock garden and to the back of the house. The vast lawn descends to the River Test, which is renowned for the quality of its trout. Swans float on the surface, the epitome of the English country idyll.

The original building was probably constructed as a fishing lodge with an extension added in 1820. It really does fit in with the Romanticism of the period – a marriage between house and gardens, of man and nature.

The honeypot chimneys and beehive roof are particularly striking. However, above all else I am impressed by the sheer space that Houghton Lodge Gardens affords.

“The garden absorbs people there is so much space,” Sophie confesses. This is the perfect place to come for a socially-distanced afternoon.

The highlight of my brief stay awaits in the water meadows where three alpacas are sheltering from the strong wind along with some Hebridean sheep. I have to admit to being particularly struck by the latter.

Sophie adopted the sheep during the lockdown. She smiles as I suggest she has started an animal sanctuary. Most of her enforced lockdown she spent introducing safety measures so the gardens could reopen, as well as writing some fun facts about the herbs.

Now, you need to book tickets to Houghton Lodge in advance online. Sophie says this has proved a great success seeing an increase in customers.

Unfortunately, our stay at Houghton Lodge Gardens was short as we had booked a Bombay Sapphire tour at the nearby distillery further along the Test river in Whitchurch.

The building is impressive. A corn mill used to stand on the site as far back as 903, and it is mentioned in the Doomsday Book. There was also a catholic church here which went the way of most others during the dissolution of the monasteries. Some of the current building are listed, dating back to 1842 when they were used to house the paper mill workers.

Bombay Sapphire has only been distilled here since 2013, with the site opened to the public as a visitor experience the following year. Prior to that the gin was distilled in Warrington. Although Bombay Dry Gin was only introduced in 1959, and Bombay Sapphire in 1986, predominantly as a means of introducing an English drink to the States, at least according to our guide, the recipe upon which the spirit is based dates back to 1761.

Every bottle of Bombay Sapphire in the world – 86 million in 2019 – is produced on this site.

The highlight of the tour, apart from learning the botanicals used to make Bombay Sapphire, was retiring to the bar for a drink created by the excellent barman, Ben.

Sumptuous Cuisine at the Crown and Garter Inkpen

After so much walking, I was keen to reach our pub – the Crown and Garter – in time for dinner.

The pub dates back to 1640, and is located in the charming village of Inkpen set in the North Wessex Downs, an Area of Outstanding Natural Beauty. It is run by the same Honesty company that manage the café at Houghton Lodge Gardens. So, having tasted one of their cakes earlier in the afternoon, we knew that we were in for a treat.

The meal was very good and imaginative. I had an excellent hake that was not at all dry as is so often the case with this fish, while my dinner guest’s lamb rump was cooked to perfection. Even the sides of chips and broccoli spears were excellent – no unwanted sogginess here, the latter were al dente and the former had a crispness that proved simply irresistible.

The desserts were equally good with the damson and chocolate fondant continuing the experimental yet excellent theme, especially when it was served with parsnip ice cream. Whatever next, a turnip sorbet?

Throughout the service was friendly yet unobtrusive just like it ought to be. As I discovered during my stay at Crathorne Hall, social-distancing measures, which had halved the number of tables from 14 to seven, allowed a privacy that complimented the excellent cuisine. The pub-cum-restaurant has also introduced a series of reassuring hygiene measures.

The Crown and Garter also has an inviting and spacious garden at the side of the pub, which must be ideal during long summer days, and which we enjoyed the following day for breakfast.

The Crown and Garter was a real discovery. Quite a gourmet delight, although there are still the regular favourites such as burger, steak, and fish and chips should you wish to play it safe.

Crown and Garter Pub with Rooms

After dinner we retired to our rooms. Recently refurbished, these are arranged around a beautiful central garden with massive lavender bushes.

Although equipped with all the mod cons, the rooms lacked the clinical nature you sometimes encounter in the UK. Bright blue soft furnishings were strewn across my bed, while the leather chair and wooden desk were nice touches.

The bathroom was extremely modern with an excellent shower and a good range of Damana products. A good night’s rest was assured.

Walks in the North Wessex Downs

Part of the attraction of Inkpen is the plethora of great walking and bike rides in the area. The café at the Crown and Garter is clearly popular with cyclists from nearby Swindon, while the shop functioned as a village shop during lockdown according to some locals I met.

The following morning, armed with instructions given to me by the helpful start, I set off for a ramble through the woods just across the roads. Despite the well-marked trail, I soon found myself lost, distracted as I was by the most pleasant birdsong.

Not that this mattered, as I ambled along a quiet road until I came across the 1924 Village Hall, where sheep were grazing nonchalantly in the adjoining field.

With the aid of Google Maps, I doubled back to Upper Green, and walked through a copse of trees to found myself in the most amazing open fields.

On my left was the elegant Kirby Hall and ahead lay the majestic Combe Hill. It was a quite delightful walk, and a great way to conclude my brief UK mini-break in the North Wessex Downs.

Other Things to Do in the Area

Highclere Castle was made famous by the TV series Downton Abbey, which was filmed here. Unfortunately Highclere is closed at weekends so we were not able to visit it on our mini-break.

If you take a tour, you can follow in the footsteps of Carson and Co exploring the main staterooms and bedrooms. The cellars currently house an Egyptian Exhibition, celebrating Carnarvon’s discovery of the tomb of Tutankhamun.

Crown and Garter Pub with Rooms

Prices start from £130 per room per night, based on two people sharing and include breakfast. Click here for the website.

All photos unless stated by Mark Bibby Jackson.