Colombia is a country of contrasts waiting to be discovered through its welcoming people full of energy and passion. 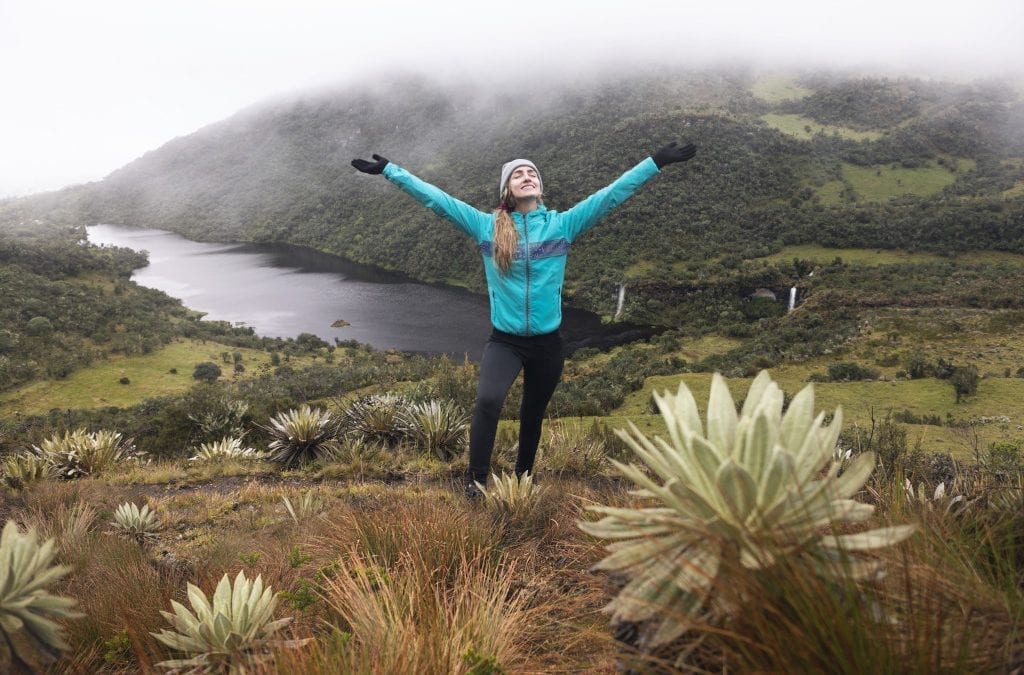 Colombia is a country of contrasts. Where the past lives seamlessly with the present; where much loved cities border unexplored terrain; where mountain ranges kiss deserted beaches, all waiting to be discovered through its welcoming people full of energy and passion.

When the time is right to travel once more, Colombia will be waiting and here are 21 reasons why it should be at the top of your 2021 travel list.

Colombia has shed its troubled history and re-emerged as one of the top destinations in South America. Working with local communities, the destination now offers an array of meaningful travel experiences and eco-driven initiatives which celebrates its rich cultural heritage and storied history.

The most biodiverse country per square mile in the world

The South American nation is the most biodiverse country on earth per square mile, with the most variety of amphibians and birds in the world, the third-highest number of endemic species and home to 10% of the Earth’s flora and fauna. The secret behind Colombia’s enviable biodiversity lies in the fact that it spans five natural regions (Andean, Caribbean and Insular, Pacific, Orinoquia and the Amazon), with almost every type of ecosystem, from humid rainforests and tropical coasts, to open wetlands and high-altitude savannahs.

Colombia is a blend of fascinating cultures and rich histories, with its pre-Colombian past, European influences and indigenous communities. As a melting pot of cultures, Colombia makes for an inclusive and welcoming destination earning the locals an unrivalled reputation for friendliness and hospitality.

Hailed as the Land of more than 1,000 Rhythms, every corner of Colombia moves to its own distinct sound. Rich local cultures are reflected in the various music and dance genres. You can feel the rhythm from the beats of Cartagena on the Caribbean coast, embrace the sounds of the ‘Salsa Capital’ of the world in Cali or move to the cowboy style music of the wild eastern plains. With a music and dance scene as diverse as its landscapes, travellers can expect to dance the night away across Colombia.

5. It is home to one of the world’s biggest Carnivals

“Who lives it, is who enjoys it (Quien lo vive, es quien lo goza)” is the slogan of the Barranquilla Carnival which gives Rio a run for its money. Honouring Colombia’s multifarious cultures – Indigenous, African, European and Middle-Eastern – Barranquilla Carnival is a spectacular display of exuberant dancing, vibrant music and colourful costumes which many say began as a celebration of spring and renewal. The four-day celebration (which was declared a Masterpiece of the Oral and Intangible Heritage of Humanity by UNESCO in 2003) runs in February, four days before Ash Wednesday.

It has the Amazon Rainforest

Referred to locally as Amazonia, the country’s Amazon region is a vast slice of rainforest accounting for a third of the country’s total area, which is roughly the size of California. Tourism is still relatively undeveloped, with little human impact on nature and the indigenous population, who reside deep in the jungle and keep their cultures intact, meaning a visit to Colombia’s Amazonia remains a transcendent experience.

From Colombian safaris with jaguars and anacondas, sea life expeditions with humpback whales and sea turtles, jungle treks with pink dolphins and monkeys, to forest reserves with sloths and toucans, Colombia offers some of the best wildlife watching in the world and this is a responsibility that it doesn’t take lightly. Colombia is one of the first countries in the world to participate in the Future of Tourism Coalitionthat shares a global mission to ensure a more sustainable and responsible future for travel including wildlife conservation as world tourism recovers from Covid-19.

There are Caribbean Beaches (with views of snow-capped mountains)

There aren’t many places in the world where travellers can laze on a Caribbean beach with views of snow-capped mountains at the same time. On clear days, bathers can spot the glacial heights of Sierra Nevada de Santa Marta from Palomino Beach (considered one of Colombia’s most beautiful beaches). Colombia’s Caribbean coast is one of the country’s most colourful regions with idyllic beaches, local cuisine, famous festivals, vibrant music and welcoming locals. The palm-shaded coves and coastal lagoons of Tayrona National Park are also not to be missed.

But also a Pacific Coast

Colombia is the only country in South America with coasts on both the Pacific and Atlantic Oceans. Often overlooked in favour of the Caribbean coast, Colombia’s Pacific coast is one of the country’s best kept secrets with pristine beaches surrounded by jungle, national parks and some indigenous communities.As an added bonus, these waters also host hundreds of humpback whales from July through to October.

There is a ‘River of Five Colours’

Unique to Colombia, the extraordinary Caño Cristales or ‘River of Five Colours’ is a naturalist’s (and instagrammers!) paradise. Located between the Andes, Amazon and Orinoco, Serrania de la Macarena is where three ecosystems merge together to create the rainbow river. During June and November, the river, waterfalls and natural pools become a kaleidoscope of colour with yellows, blues, reds, blacks and greens emanating from algae unique to this water.

A haven for outdoor enthusiasts

Enthusiastic explorers and adrenaline fuelled adventurers will delight in Colombia’s huge offering in its diverse landscape. From slower paced expeditions such as bird watching (Colombia has the highest biodiversity of birds in the world), scuba diving, jungle treks and horse-back trails to fast-paced adventures for adrenaline junkies, such as ziplining or paragliding through the heart of Chicamocha Canyon (the second largest canyon in the world), rappelling down waterfalls, rafting and caving amongst Santander’s Andean summits.

Colombia is at the heart of South American cycling tourism because of its diverse topography and climate. Cyclists experience a variety of beautiful landscapes and altitudes; from mountainous climbs at high altitude, to humid rainforest routes and cool coastal circuits. Cycling is a great way to see and experience Colombia’s varied landscape especially as there are over 38 key training trails that meander through national parks and heritage villages.

Cartagena is undisputedly Colombia’s queen of the Caribbean coast. Once favoured for its gold and fortune, Cartagena remains a 16th century treasure of cobbled streets, pastel-coloured walls and bougainvillea covered buildings. The city’s beautiful Old Town – a UNESCO World Heritage Site – is a place to drop all sightseeing routines and leisurely meander through the maze of quaint alleyways, past churches barnacled with gold and street vendors with carts full of fresh juice, cigars and hats and stroll along the beautiful city walls.

Hidden deep in the jungle of the Sierra Nevada de Santa Marta mountains sits Ciudad Perdida, the ‘Lost City’. Built by the Tayrona people more than 1,000 years ago, this lost city was built around 700AD, making it more than 600 years older than its Peruvian counterpart, Machu Picchu. There are no trains or buses here to provide easy access to these ruins, but rather it is reached by crossing forests full of exotic fauna and flora, hanging bridges, mountains and waterfalls.

With the 2011 legalisation of graffiti in Bogota, the Colombian capital has become a hotbed of global talent, with homegrown and world-renowned artists showcasing their art throughout the city. A shining example of the transformative power of Colombia’s street art can also be seen in Medellin – once regarded as the world’s most dangerous city. Through successful community-driven, revitalisation programmes, residents now use the city walls as canvases to share stories of the city’s past and tell their personal tales. Remarkably, in the space of one generation, Medellin has been transformed into one of Colombia’s most innovative and coolest cities with a thriving art scene.

Colombia is globally renowned for producing some of the world’s best coffee and has a thriving coffee tourism industry. Colombia’s Coffee region (aka the Coffee Triangle) covers three traditional regions; Caldas, Risaralda and Quindío, as well as the newer departments of Norte del Valle del Cauca and Antioquia. Travellers can visit coffee plantations as one would wineries, touring the plantations and sampling the finished product.

Home to a Salt Cathedral

The magnificent Salt Cathedral of Zipaquira, is 180 metres deep and is hollowed out of a mountain. A short drive from Bogota the underground temple can be found deep within the colonial city of Zipaquira. It was originally carved into the salt rock by miners as a makeshift tunnel chapel in the 1930s. You can follow the passageways down past a series of room-sized chambers to a vast atrium, 75 metres long, 18 metres high and accommodating up to 8,400 people.

So much more than a bed for the night!

Secrets of Colombia is a newly-formed coalition of thirteen boutique hotels, committed to driving conservation, working with local communities, respecting local traditions and promoting alternative tourist destinations. Visitors can sleep peacefully secure in the knowledge that hotel proceeds go to good causes. Deep in the Amazon Rainforest, Calanoa supplies reading glasses for elders, medicines and university funds for village children, as well as programmes to help preserve the aboriginal culture. The luxurious Corocora Camp in Los Llanos, has developed a community project to educate locals about conservation and prevent illegal wildlife trafficking in the area, whilst La Serranía de la Macarena’s forest lodge La Manigua, invests its earnings in a nursery cultivating native plants to assist in the recovery of the forests.

Regenerative tourism is a driving force in achieving peace, preserving culture and transforming the fabric of society. Local guides, peace leaders and cultural guardians have harnessed travel’s positive force for good and provided new forms of employment and purpose. Stories abound of tourism’s social transformation across Colombia, from ex-gang members hosting Bogota’s art and neighbourhood tours and former FARC combatants in Caguán swapping rifles for paddles by becoming rafting instructors, to fishermen in La Boquilla teaching tourists their traditional techniques and indigenous women in Zenú hosting weaving workshops and encouraging skill sets to be passed down. Covid-19 has adversely affected all these communities and they rely on tourists to keep businesses running and people employed.

In addition to being one of the first countries in the world to participate in the Future of Tourism Coalition, Colombia has taken the initiative a step further and proposed to amend the General Law of Tourism,with sustainability at its core. It formally recognises the importance of protecting the environment and supporting local communities, positioning them as leading principles in the recovery of Colombia’s tourism industry. What’s more, ProColombia recently launched the Illustrated Manual for Nature Tourism Guides , which looks at promoting responsible and sustainable practices for guides to use whilst also safeguarding the country’s biodiversity. Whilst Colombian authorities create a stronger, greener and more sustainable destination in a post-covid world, travellers can play their part by visiting Colombia in 2021, supporting local communities and keeping the flame of tourism alive.

All photos provided by ProColombia.