Victoria & Albert: Our Lives in Watercolour at The Queen’s Gallery, Palace of Holyroodhouse Edinburgh runs from 5 March to 5 September 2021. 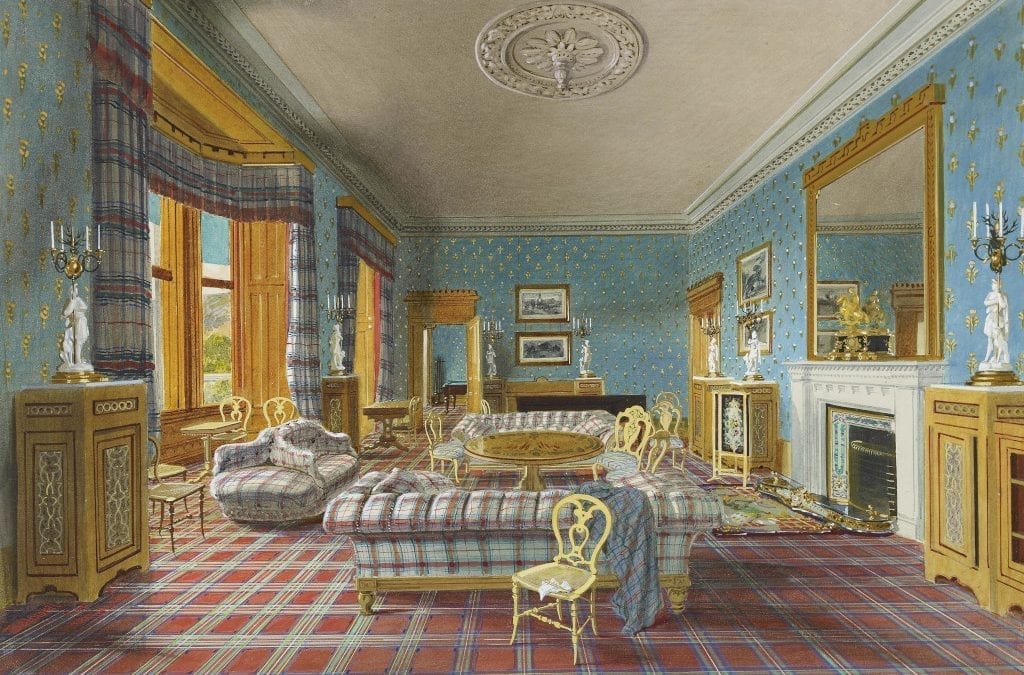 A new exhibition at the Palace of Holyroodhouse featuring watercolours collected by Queen Victoria and Prince Albert is set to open this March in Edinburgh. Throughout their marriage Victoria and her consort were passionate patrons of watercolour painting. Victoria & Albert: Our Lives in Watercolour will feature 80 works from their extensive collection including several by Scottish artists, and some that have never been publicly displayed in Scotland.

The watercolours provide a delightful visual record of the royal life in the pre-digital Victorian era from the domestic to the public arena. These include moments of family significance such as the christenings and birthday parties of the royal children. The couple had nine children and remarkably for the period, they all survived to adulthood.

The exhibition features paintings of glittering court balls, as well as the royal homes of Windsor Castle, Balmoral Castle and Buckingham Palace. Victoria was instrumental in modernising and extending the London royal residence to accommodate a growing family by the addition of the iconic east wing. The Drawing Room, Balmoral, by James Roberts (1857) shows a charming family room decorated in pretty wall coverings and soft furnishings.

One of the most celebrated 19th century Scottish landscape painters, Leitch, was a favourite watercolourist of Victoria. The Queen studied under the self-taught Glaswegian artist’s supervision for almost 20 years and became a talented amateur watercolourist, painting pets, family and acquaintances. An enchanting watercolour of Victoria’s third son aged three, entitled simply Arthur (1853) features in the exhibition, alongside a Watercolour practice sheet (c. 1846-60).

The collection also features works illustrating 19th century life. Salmon leistering in the River Dee, by German artist Carl Haag (1853) represents a pastoral scene. Seven men, with some wearing the tartan, wade in the river while two men in the foreground roll up a net over a pole, as the rest spear salmon by hand.

The couple’s extensive travels are extensively documented as they commissioned artists to capture their experiences with views of the cities and landscapes they visited. On display for the first time in the exhibition is a watercolour by William Leighton Leitch. The Queen Landing at Granton Pier (1844) depicts a celebratory scene of welcome when the royal couple arrived in Edinburgh aboard the royal yacht for their first tour of Scotland in 1842. Between official engagements the couple enjoyed ‘sightseeing’ and visited landmarks including Arthur’s Seat and Rosslyn Chapel.

In 1843 Victoria made her first journey abroad when the royal couple visited the château d’Eu in Normandy at the invitation of the French King Louis-Philippe. The following year the King presented Victoria with an album of watercolours depicting both private gatherings, alongside those of pomp and spectacle.

The painting Marie-Amélie, Queen of the French, greets Queen Victoria at Le Tréport by Eugène Louis Lami (c.1843-4) portrays a romantic courtly scene of a marquee flying colourful banners surrounded by courtiers and guests in their finery.

Schloss Rosenau, Douglas Morison (1845) portrays the site outside Coburg which held personal significance to the couple. Victoria described this in her journal as ‘my dearest Albert’s birthplace & favourite place’. The Gothic Revival architecture of the Schloss is highly decorative and the building is encroached by trees rather like a Sleeping Beauty’s castle in the fairytale. On their stay Victoria and Albert are said to have slept in the room of his birth.

The watercolours depicting the Great Exhibition of 1851 capture magnificently the temporary spectacle of that great event, staged to promote the unprecedented industrial progress of the Victorian Age. The works emphasise not only the dazzling scale of the remarkable Crystal Palace but also the diverse exhibits on display, from stuffed elephants to stained glass. Visitors are portrayed marvelling at modern iron and steel contraptions in Louis Haghe’s futuristic-looking representation of the hall of moving machinery.

Prince Albert’s closing address at the Great Exhibition by Joseph Nash (1851) establishes the Prince as a leading figure in the organisation of the Exhibition addressing the exhibition spectators.

After Albert’s death in 1861, Victoria continued to commission watercolours. Making its public debut is another Edinburgh scene, Queen Victoria at the unveiling of the statue of Prince Albert in Edinburgh by Glaswegian artist William Simpson. Victoria is portrayed at the unveiling of her beloved’s memorial in Charlotte Square in 1876. The ‘golden’ bronze depicting Albert on horseback dominates the scene.

The colourful, dynamic watercolours collected by Victoria and Albert illuminate aspects of both Victoria’s reign and the royal couple’s passions. They capture the pomp and spectacle of the British court, a shared love of Scotland, foreign travel and diplomacy, and the close-knit family at the heart of it all. It is a fascinating showcase of Victorian life, albeit a rather privileged and idealistic one.

The publication Victoria & Albert: Our Lives in Watercolour is published by Royal Collection Trust to coincide with the exhibition.

To discover more about Victoria and Albert why not visit Osborne Castle on your Isle of Wight holidays?

At The Queen’s Gallery, Palace of Holyroodhouse, Edinburgh runs from 5 March to 5 September 2021. Advance booking is essential. The ticket office is currently closed under government guidelines. www.rct.uk