If you are looking for a new UK holiday destination, Lincoln is the hidden gem of the East Midlands. 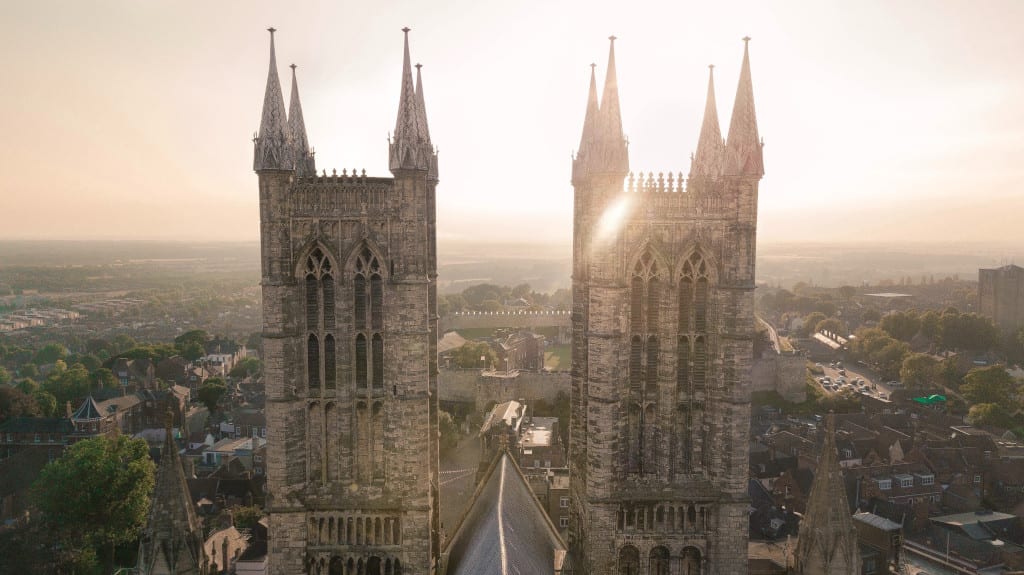 If you are looking for a new UK holiday destination, Lincoln is the hidden gem of the East Midlands. With the city’s origins dating back to the first-century, Lincoln offers extensive relics of British history and culture, telling the UK’s story through its celebrated architecture.

Situated just a short journey from the Lincolnshire Wolds, Lincoln is the perfect blend of outside beauty spots, quirky shops, historic sites and contemporary restaurants.

Here is our guide to the top 10 must-sees in Lincoln.

As the most iconic building in the city, a trip to Lincoln is incomplete without a visit to the Cathedral. Built almost 1,000 years ago, Lincoln Cathedral is regarded as one of Europe’s finest Gothic buildings. Ordered to be built by William the Conqueror, the cathedral is remembered as a constant during the changes to British rule over the last millennium. During your visit, try to spot the stone imp that has been engraved into the Cathedral. Now an emblem of the city, legend has it that young imps were once let loose on the cathedral, causing havoc. To put a stop to this, an angel appeared and turned them into stone.

Connecting the area surrounding the Cathedral with Lincoln’s more modern centre, is the aptly named, Steep Hill. Noted as the fourth steepest street in England, Steep Hill is famed for its eclectic mix of independent businesses, housing boutiques, tearooms and vintage bookstores in some of the city’s oldest buildings. The bright coloured shopfront and cobbled streets give a distinctly European feel, making you feel like you are wandering around the continent, getting that city break fix.

At the heart of Lincoln’s centre is the city’s newest leisure development, The Cornhill Quarter. Centered around the city’s 1879 Corn Exchange, the Grade II listed building combines the rich history of the city with new contemporary bars, shops, and restaurants. With a mixture of independent businesses, and traditional high-street brands, like Whistles and Hobbs, The Cornhill Quarter gives the perfect variety for an afternoon shopping trip. A particular highlight is local jewellers, k. fines jewellery, offering beautiful, contemporary pieces made with ethically sourced materials. End your day with a specialist gin cocktail and evening meal at The Botanist, perhaps before a late-night visit to the Everyman Cinema, part of the chain of rep cinemas that includes the Everyman Hampstead and Screen on the Green in London.

Located just outside of Lincoln is the stunning Doddington Hall and Gardens. A privately owned, late Elizabeth Mansion, Doddington Hall began construction in 1595 by Robert Smythson, one of England’s most notable Elizabethan architects. The hall is ornately decorated, featuring furnishings, portraiture and ornaments from the past four hundred years. Admire the exteriors of the hall whilst taking a walk round its spectacular gardens. Remaining faithful to its Elizabethan layout, the gardens have been lovingly cultivated to ensure flowers blossoming for much of the year. For those wishing to enjoy the full experience, Doddington Hall has 22 holiday cottages that are available to stay in.

Built in 1068, the Lincoln Castle. has dominated the city’s skyline for nearly a thousand years. Inside the Castle Walls, guests can explore the Georgian and Victorian prison, detailing historic crime and punishment in Lincoln. The castle’s medieval wall walk is a particular highlight, giving visitors a chance to walk the whole circumference, enjoying the historic site and a stunning view over the city’s skyline. The castle also currently houses one of the only four surviving copies of the 1215 Magna Carta.

Discover what our editor Mark Bibby Jackson has to say of the city as he discovers Lincoln Cathedral and Hidden England.

Remembered as a centre for military development during the First and Second World war, Lincoln is an important visit for those interested in military history. The International Bomber Command Centre is a particular must-see. Home to the UK’s tallest war memorial, the centre is prefaced as a story of discovery, education and remembrance, acknowledging over a million men and women who supported Bomber Command during the Second World War. Part of the IBCC is the Chadwick Centre, which uses state-of-the-art technology to tell the story of Bomber Command through first-hand witnesses.

Located just a short walk from Lincoln castle, the Arboretum is the perfect park to relax in after a morning of exploring. First designed during the Victorian era, by the celebrated gardener Edward Milner, the Arboretum combines relics of Lincoln’s history with one of the city’s most beautiful green spaces. Spanning 22 acres, the Arboretum is home to lakes, fountains and a children’s play area, making it suitable for all ages. As well as holding Grade II listed status, the park contains five listed features, most notably a cast iron bandstand from 1884.

Lincoln’s earliest origins date back to the first century. Between AD50-60, a legionary fortress was built by the Romans here, signifying the beginning of the city. Many of the structures can still be seen today, including the country’s only remaining Roman arch, the Newport Arch. Still in use today, the arch represents the synthesis of the past and the present in Lincoln. Visitors can use the arch as a starting point for The Lincoln Roman Trail, an interactive tour of the city’s Roman remains, which includes a trip to The Collection Museum, where you can see many Roman artefacts on display.

As England’s oldest inland harbour, Brayford Waterfront is another reminder of Lincoln’s important place in British history. Take a walk around the water and enjoy the spectacular scenery. For a unique experience of the area, take a water tour on the Brayford Belle, offering guests a guided trip on the canal, with added commentary on Lincoln’s past and present.

Originally founded as The City and County Museum in 1906, The Collection came into existence when the museum merged with The Usher Gallery and is now a museum of art and archaeology. The art section of the museum, The Usher Gallery, hosts an extensive collection of fine and decorative arts, as well as a variety of different contemporary exhibitions throughout the year. With a mixture of neoclassical sculptures, 18th century portraiture and a collection of vases by the British artist Grayson Perry, the Usher Gallery offers a unique blend of artwork to suit every visitor. The archaeological part of the museum focuses on artefacts collected from the county of Lincolnshire, with the earliest materials dating back to 300,000 years ago.

How To Get To Lincoln

Via the LNER railway line, Lincoln is just under a two-hour trip away from London King’s Cross Station. Trains depart every two hours.

From luxury hotel rooms, self-contained holiday homes, glamping sites and B&Bs, there is a wide range of accommodation to suit all tastes in Lincoln. For those wishing to stay near the historic centre, Bail House Hotel or the Cathedral View Guest House are highly recommended. The Dairy Barn in Ingham, a luxury barn conversion just outside of the city, offers a tranquil and private experience for its guests. Find out more about accommodation here.