Tinseltown at The Athenaeum Hotel London

Roger Hermiston and Eileen Wise spend a night at The Athenaeum Hotel London, one of the capital’s most star-studded hotels. 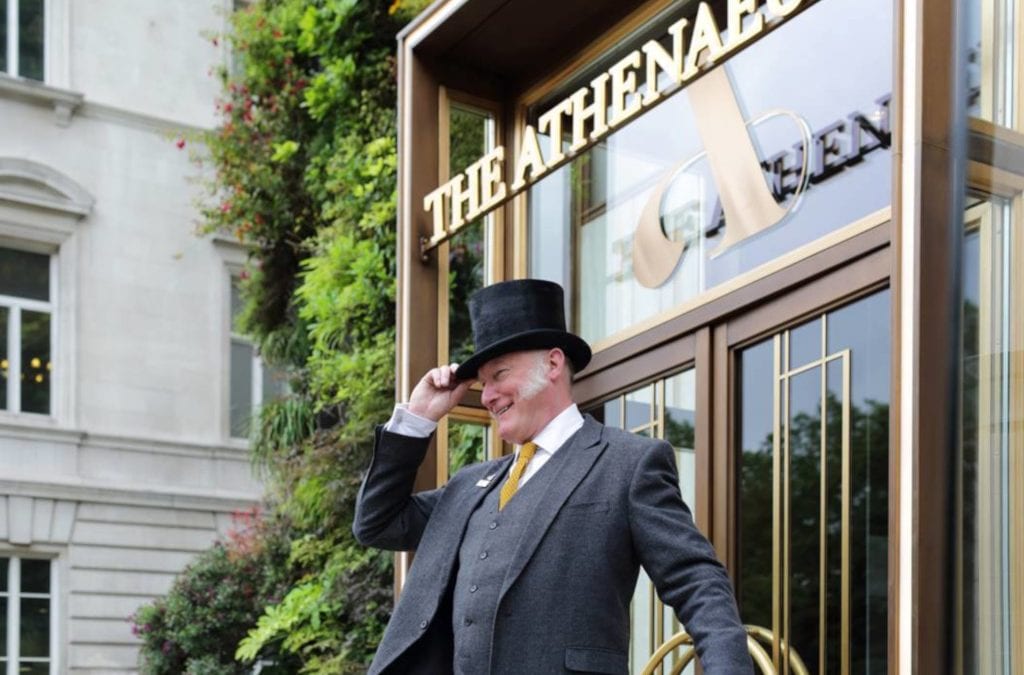 Tinseltown at The Athenaeum Hotel London

Roger Hermiston and Eileen Wise spend a night at The Athenaeum Hotel London, and enjoy the rich history, wonderful cuisine and green credentials of one of the capital’s most star-studded hotels.

Athenaeum – the classical name conjures up a vision of a grand library where bewhiskered gentlemen of science, politics and the arts arrange their tailcoats on deep red leather chairs and sit back to read and learn, and engage in discourse in hushed tones in quiet corners.

History of the Athenaeum Hotel

Back in the 1860s such an atmosphere would undoubtedly have pervaded 116 Piccadilly in London’s Mayfair, home to the newly-formed Junior Athenaeum Club. A hundred and sixty years on and the quiet corners and their Victorian ghosts still remain, but once through the ornate front door the welcoming words from the reception staff, the convivial chatter of guests, and the bark of a dog sweep you into a very different world, one of a vibrant, characterful luxury boutique hotel. 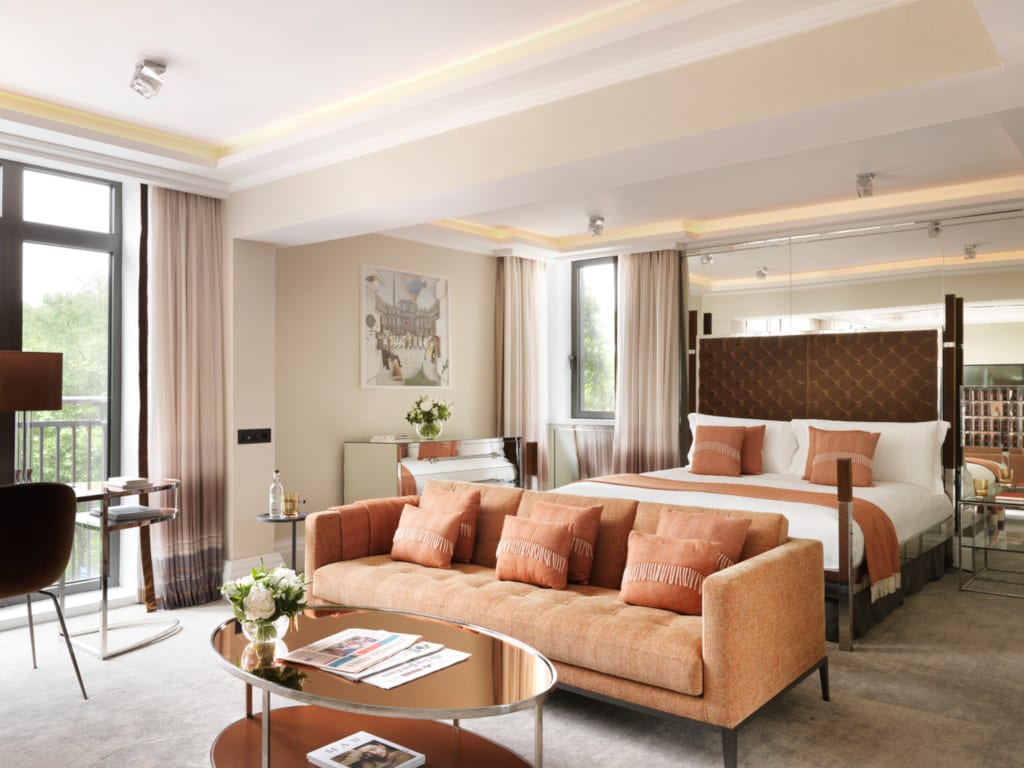 The past informs the present, and the Athenaeum Hotel – with attached Townhouse residences in adjoining Down Street – is proud of its history, which is as rich as they come. The building dates back even further than the club, to the late 1840s, when it was the elegant home of MP Henry Hope, one of whose friends was a certain Charles Dickens. The great author was bowled over by its elaborate interiors, and stopped by often to view Hope’s prize collection of Old Masters.

Fast forward to the 1930s, when the huge house was transformed into stylish, Art Deco apartments. Then in 1973, having been bought by the Rank Organisation, it began life as a hotel and the spirit and character of the place, so evident today, was born.

Tinseltown on the Thames

With its Hollywood connection, the Athenaeum Hotel established a reputation as a home from home for America’s best-known actors and directors, earning the sobriquet ‘Tinseltown on the Thames’. The likes of Lauren Bacall, Marlon Brando, Robert Redford, Liza Minelli, Harrison Ford and Richard Dreyfuss spent time here. Elizabeth Taylor took up lengthy residence during one film project in England, while Stephen Spielberg installed an editing suite in his Athenaeum residence while completing E.T.

They might not all have come had it not been for the legendary Sally Bulloch, Executive Manager here for 26 years. A child actor herself (with an appearance in Pure Hell At St Trinians, in which she set fire to the school), Sally was a force of nature, a “kind, champagne-swilling, smoking hedonist with the biggest heart in London”. Bill Clinton was enchanted by her after she offered to read his palm, Nelson Mandela delayed his motorcade to spend more time in her company, while Russell Crowe meekly went to tidy his room after she gave him a dressing-down.

The glory days when the Athenaeum Bar outshone the Polo Lounge at the Beverley Hills might be over, but Sally’s effervescent spirit lives on. The ‘Grand Dame of Piccadilly’ is no staid five-star hotel, but a lively, open and relaxed place to stay.

The family friendly nature of the hotel even extends to dogs. Through the front door and the first thing to greet you is canine resident ‘Douglas’, a very life-sized bronze statue of well, we weren’t quite sure, possibly a Labrador/Spaniel/Large Poodle. A real eager King Charles spaniel was checking in with its family when we arrived. Special mattresses and other accoutrements are available for the pooches, and helpful dog-walking maps are provided for the adjacent Green Park.

As for the humans, well, they have 135 comfortable bedrooms and eleven elegant suites to choose from, along with the 14 residences for those wanting a prolonged stay in town. All were renovated just a few years ago at the direction of acclaimed interior designer Martin Hulbert, who has successfully blended the hotel’s 1930s Art Deco look with contemporary flourishes. ‘Classically English – but a little eccentric’, he describes his work at The Athenaeum, with the accent on space, light and stunning views.

We had one of the stylish Green Park suites, where our floor to ceiling windows gave us a spectacular vista over the historic grounds on the other side of the road. Our classic marbled bathroom contained a huge walk-in shower, while the King-sized bed gave us a restful night’s sleep after an afternoon’s long walk around Piccadilly and its environs.

Equally soothing was our visit to The Athenaeum Hotel Spa, located in the hotel basement, where we sampled the hot tub, steam room and sauna before enjoying one of the signature treatments, the hot stone massage. We’ve enjoyed a few of these in the past, but this was as good as it gets, aching back and shoulders revived, body revitalised.

Those who have run The Athenaeum over the years have had the imagination to try unusual projects to make it stand out from the elite crowd. So it was in 2009, when the renowned French botanist Patrick Blanc was commissioned to create a vertical garden at the hotel’s corner with Down Street.

Twelve years on, as summer was just enfolding, we were able to gaze up ten storeys into the air at The Athenaeum’s Living Wall, an extraordinarily verdant carpet of flora and fauna. This wallscape has been created through the hydroponic method, which involves growing plants without soil, by using mineral nutrient solutions in an aqueous solvent. No mulching required here – just some secateurs, kitchen scissors and a staple gun.

Daniel Bell, the garden designer who maintains the wall, has to grapple with the problems of city pollution and getting the balance of water exactly right. But he says London is helped by its reasonably warm climate, and the magnificent Living Wall now has hundreds of plants, the ones near the top reaching two metres in height.

The wall is not just an innovative and impressive symbol of the hotel, but it purifies the air of this corner of the West End; it has been calculated that it removes 757kg of CO2 and produces 559kg of oxygen every year.

A stroll around an even bigger element in the city’s biosphere seemed the logical thing to do next. At 47 acres, Green Park (called the Upper St James’s Park until 1746) is the smallest of the Royal Parks. The grass is kept long and wild near the roadside; in the more manicured areas close to the park’s larger cousin, St James’s Park, the squirrels scampered and the pigeons hovered while lunch goers tucked into their sandwiches.

It is of course just a short walk from The Athenaeum into the heart of Mayfair, where Shepherd’s Market, with its excellent restaurants – Lebanese the best – pubs and boutiques awaits, not to mention the splendid Curzon cinema. But on this day we chose a familiar route from Green Park up Piccadilly to sample two of our favourite shops – Fortnum and Mason, and the Queen’s bookshop, Hatchards.

The View and The Barn

Later, back at the hotel, the engaging and informative guest relations manager Kim Whitehorn took us up to The View, the exclusive lounge for residents on the top floor which has panoramic views out over the city. Now also a venue for informal business meetings (a shower room is provided) and informal gatherings, it was once the hotel’s majestic penthouse suite. Here, Kim told us, Mrs Thatcher stayed for three months while waiting to move into a new London home.

Another famous prime minister also has fascinating links with this part of town. Opposite The Athenaeum townhouses at the Piccadilly end of Down Street there used to be an underground station; you can still see the familiar exterior, under part of which is now a convenience store. It went out of use in 1932, presumably because there was little call for it among the wealthy denizens of these parts who took cabs, or perhaps had begun to own cars.

But at the height of The Blitz, in autumn 1940, it was turned into safe offices for the Railway Executive Committee, the group of men tasked with keeping Britain’s railways open. Then Winston Churchill visited one day and felt it would make an excellent alternative to the underground War Cabinet Rooms in Whitehall – and backup sleeping quarters for himself and his wife Clementine.

It seems there were government meetings here, although there is no record of an actual war cabinet meeting being held at ‘The Barn’, as Churchill dubbed the underground station. But in his vivid wartime diaries, Churchill’s private secretary Jock Colville records his master “sleeping the night in the tube at Down Street” on October 25 1940, and then six days later noting that “The PM felt ill, was sick and went off to Down Street where he had no dinner” – about which Churchill gruffly commented “much resented, although it was very good for me”.

Pre-pandemic, history-minded Athenaeum guests would enjoy London Transport Museum tours around Down Street, following Churchill’s footsteps in those days when the capital’s very existence was threatened. Hopefully those tours will be up and running again soon.

If The Athenaeum had been open in those days, the great man, a formidable meat-eater, would no doubt have marched across the road into the 116 restaurant and ordered the menu’s rib-eye steak. We went instead for the very satisfying fish and chips and a pea and shallot ravioli, washed down by an excellent bottle of Pinot Grigio. Contemporary British, the cooking style simple and fresh with an unusual twist, is what is on offer from Executive Head Chef Ian Howard, previously in charge – amongst others – at Borough Market’s acclaimed Roast Restaurant.

There is much else to admire as you wander round The Athenaeum – not least the eclectic artwork. Naturally, photographs of its film star friends and visitors adorn the walls – pride of place going to one of Joanna Lumley in Absolutely Fabulous mode, vodka bottle in hand with a New York backdrop, that sets the mood in the restaurant saloon. Elsewhere Bridget Davies’s stylish watercolors evoke the glamour of the 40s and 50s, while David Arky’s striking x-ray photographs of inanimate objects light up the lobby.

The hotel played its part at the height of the pandemic, housing some 50 key workers, nurses and doctors. Five star it may be, but The Athenaeum provides guests with a welcoming, down-to-earth approach. It draws strength from its famous past, but keeps its eye very much on the developments in the present – and the future.