On his annual pilgrimage Mark Bibby Jackson revisits some familiar Isle of Wight restaurants to discover a clear tidal shift. 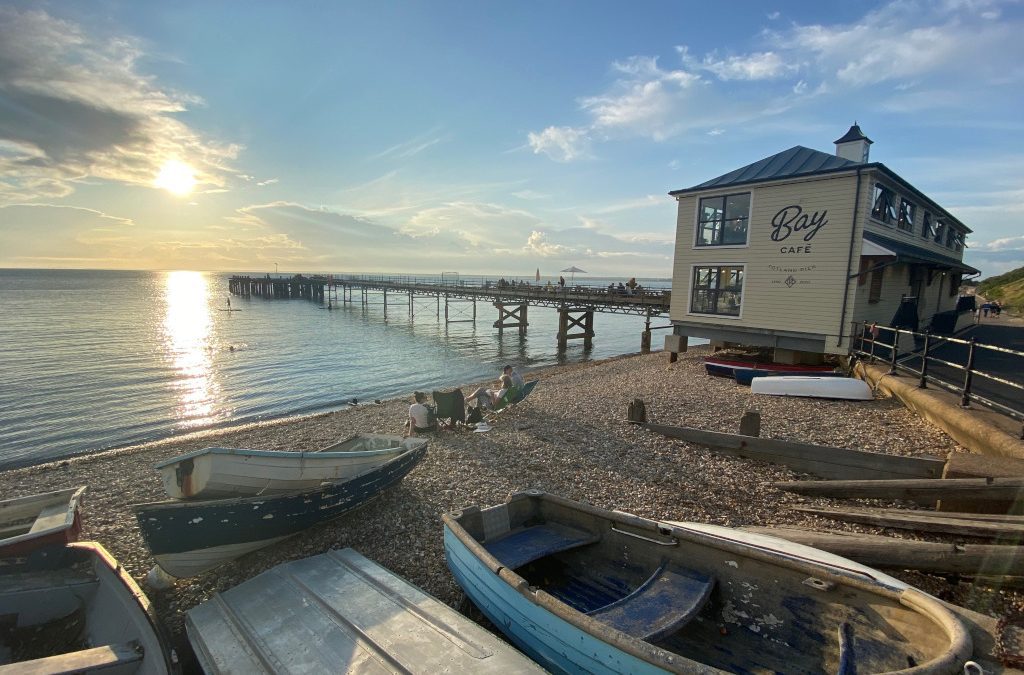 On his annual pilgrimage Mark Bibby Jackson revisits some familiar Isle of Wight restaurants to discover a clear tidal shift.

For decades the Isle of Wight has been one of the unsung highlights of the UK domestic tourism market. One of the sunniest places in the UK, the island has excellent beaches, clear water, great walking opportunities, and wonderful cuisine – especially if you like seafood.

In recent years there has been a definite shift in the quality of food on offer in the Isle of Wight restaurants – at least on the west of the island. Part of this is due to the popularity of The Hut in Colwell Bay, which recently won the Best Experience category of the GQ Food and Drink Awards, so naturally this is where we headed on our first night.

Part of the charm of The Hut lies in its location, right on the waterfront in Colwell Bay with breath-taking views across the Solent to the mainland, especially at sunset. So it is best to try to get a seat outside. And I do mean try, as this place books up quickly especially in the summer months – it is closed during winter.

The food is always excellently presented, and the ambience despite – or perhaps due to – attracting celebrities and the boating crowd is informal and relaxed. On one meal we sat next to an actor who found fame playing Sherlock. The service is impeccable.

The only downside to the Hut is the price – £45 pp for a plateau de fruits de mer – but really you are paying for much more than just the food.

On our most recent visit, I had an excellent torched mackerel fillet followed by an equally satisfying whole Thai sea bream served with heaps of lemongrass and an interesting chilli salsa. It is still setting the standard as the best fish restaurant on the Isle of Wight.

Each time I visit the island I make sure to go on my favourite Isle of Wight walk, which starts at Heddon Warren and then proceeds to the Needles and on to Tennyson Monument on Tennyson Downs before ending up in Freshwater. Especially on this trip when the sun was out throughout, I am in need of refreshment by the time I have concluded my walk.

The Highdown Inn is probably my favourite pub on the Isle of Wight, especially in the summer when you can sit in the spacious garden and enjoy a pint, accompanied by the freshest of fresh crab sandwiches.

Really popular with walkers, the pub always used to have a slightly run down atmosphere, although judging by my cursory look – we never left the gardens – it has had a major facelift during lockdown.

If you have never tried the crab sandwiches you really have never lived. We made a repeat visit the following day – it was that good.

Yarmouth is my favourite town on the Isle of Wight. It is always a delight to arrive here on the Wightlink Ferry, especially with its 16th Century Castle to greet our arrival. On our second evening we returned to the town to dine at Cucina, which has fast become our favourite Isle of Wight Italian restaurant.

The highlight of the menu is the Chef’s Special Fish Stew. Packed full of fish and seafood, including monkfish, squid, mussels and clams in a tomato sauce, this really is a meal in itself and never disappoints. Not that this stopped me from ordering the king prawn picante to start; a decision I did not regret.

Another of my Isle of Wight holiday highlights is swimming – well more floating – in the clear water. I normally wander into the sea from Totland beach and drift around looking at the precarious cliffs and the sea-ravaged pier.

Since last year the small café at the front of the pier has been transformed into the two-storey The Bay Café with some seats on the actual pier. It is here that we settled on our final evening for cocktails before our last supper.

As he sipped upon his strawberry daiquiri my uncle – a beer and red wine man – declared that his life had changed possibly forever. Certainly the wonderful setting complemented the drinks, and you can be sure that this will become one of our mainstays on our repeat visits to the island.

Owner Charlie, who was also involved in the setting up of The Hut, showed me his future plans that involve a two-storey restaurant at the end of the pier which should be open for next summer. Who knows this might even give The Hut a run for its money?

Our culinary trip of the Isle of Wight restaurants, ended at another of our old favourites. The Red Lion has undergone a couple of transformations since I first came here more than a decade ago. Previous owner Michael used to ban the use of mobile phones, and encourage banter at the bar. Since his death, the boozer has been transformed into a gastropub with a reliable menu.

So, I felt I knew what to expect when we entered the pub. And on first appearance little had changed. That is until we glanced at the menu, which had been transformed by new Head Chef, Sean Jeffers, who was previously the Head Chef at the Ale and Oyster, Ventnor, where he won the Michelin plate, the precursor to the Michelin star, for four years running.

Our favourite crab mornay might have disappeared, but it has been replaced by a wonderful selection of food that has really lifted the bar for the Isle of Wight restaurant scene, at least on the west of the island.

The seared scallops I had to start were perfectly cooked and a pleasant introduction to the food. However, it was the sea bass fillet that followed, which I had served with celeriac, parsley emulsion, leek and velouté – although that is prescribed for the cod dish – that really took my breath away. Seldom have my expectations been exceeded so spectacularly. Sea bass has become an omnipresent on menus across the land, but not often has it been cooked and presented so well.

Reassured we ventured for the vegan chocolate and hazelnut desert, served with honeycomb and salted caramel. If anything this surpassed the sea bass. Jeffers has in a short time totally transformed the kitchen and proved that there is life in the old dog – or red lion – yet.

Refreshed and reinvigorated, we took the ferry back to Lymington the following day, almost counting down the days until our next trip to the Isle of Wight for another culinary extravaganza.

Isle of Wight Restaurants and Pubs

Getting to the Isle of Wight

For more information on what to do on the Isle of Wight, click here.

All photos by Mark Bibby Jackson, unless specified.