Mark Bibby Jackson visits Waterperry Gardens near Oxford for a performance of Donizetti’s The Elixir of Love set in the most spectacular setting. 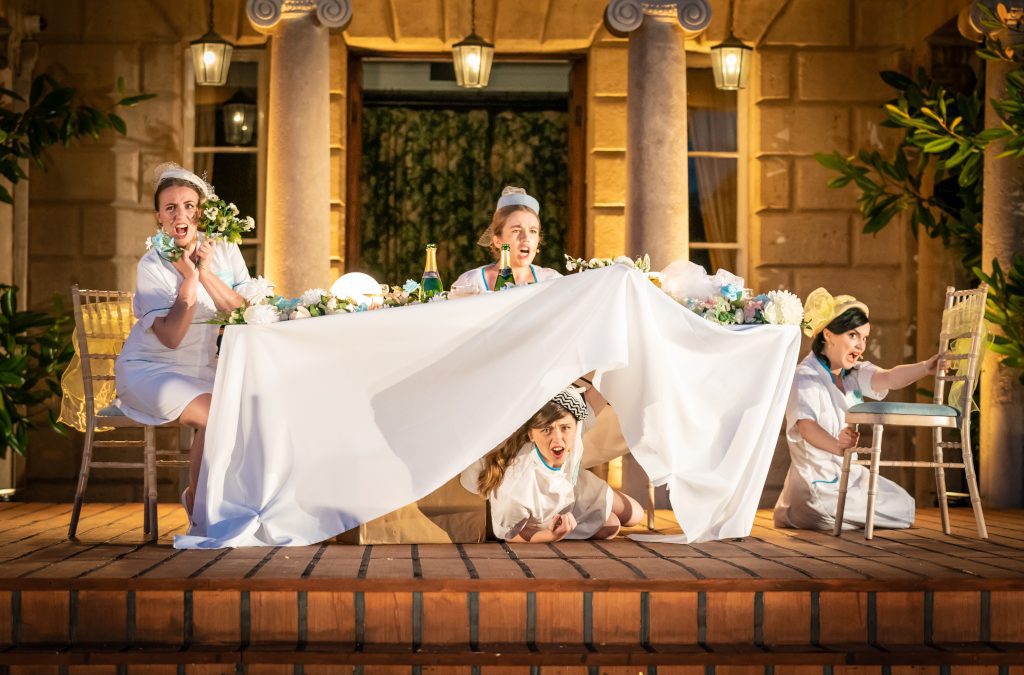 Mark Bibby Jackson visits Waterperry Gardens near Oxford for a performance of Donizetti’s The Elixir of Love set in the most spectacular setting.

Donizetti’s The Elixir of Love started the fourth Waterperry Opera Festival on 12 August. The comedy which was written in 1832 has been relocated to Saratoga Springs York, in 1950 at the onset of the Korean War.

The Elixir of Love Plot & Cast

Adina, the owner of the spa, is courted by many suitors. Airman Belcore comes to woo her and is amazed to discover that his advances are not welcomed. Adina is a strong, independent woman who wishes to stay that way. Meanwhile the spa’s janitor, Nemorino, has fallen in love with Adina saying that he would die for her, and in a desperate attempt to make her fall in love with him purchases an elixir of love from travelling salesman Dulcamara.

However, instead of making him fall for her the elixir – which is just cheap bootleg – makes him fall drunk, horrifying Adina. Nemorino is called up for service, and demands that Adina marry her that night. Adina assents. But will she?

The highlight of Donizetti’s opera is not thin plot but rather the wonderful music performed by the Waterperry Opera Festival Orchestra conducted by Bertie Baigent.

Both Thando Mjandana as Nemorino and Alison Langer as Adina are excellent, although Oskar McCarthy (Dulcamara) at times rather steals the show providing the comic relief. This is a youthful company directed by Dan Ayling, and there is an exuberance throughout the performance from the onset when the cast walks through the audience to the stage in the front of Waterperry House. The excellent chorus of spa staff provides a dynamism to the performance that never fails to entertain.

The libretto by Felice Romani has been translated into English by Kelley Rourke so you do not have to brush up on your Italian before the performance.

However, in many respects the star of the show is the setting. The stunning Waterperry Gardens was established as the School of Horticulture for Ladies in 1932 – until 1971 – by Beatrix Havergal. Now it contains eight acres of beautiful ornamental gardens and orchards, including the Formal Garden, the Mary Rose Garden, the Waterlily Canal and the Long Colour Border, as well as a riverside walk.

Tickets to the opera include access to the gardens so you can spend a pleasant hour wandering around the grounds before enjoying a picnic prior to the performance at 6pm. You can picnic in the formal gardens after 5pm once they are closed to the public.

To find out more visit the Waterperry Gardens​ website. Open 10am to 5:30pm between 1 April and 31 October, and 10am to 5pm in the winter.

Other performances in the festival, such as Peter and the Wolf, and Ariel are performed in the gardens themselves.

The 2021 Waterperry Opera Festival runs until 21 August and features 46 events.

Tickets for Peter and the Wolf (Prokofiev), Ariel (Jonathan Dove), Clairières dans le ciel (Boulanger), On Wenlock Edge (Vaughan Williams) and The Quartet for the End of Time (Messiaen) can be bought here.

Guy Withers, Artistic Director, says, “We see our festival as a wonderful opportunity to bring music and hope to our audiences… Our programme aims to develop new audiences of opera, offering something for everyone. We cannot wait to invite audiences to escape into the wild and immerse themselves in the magic of the music and nature we have on offer this summer.”

Organisers have implemented a one way route, and adopted social distancing measures including restricted attendance and paperless ticketing.

Donizetti’s The Elixir of Love

All Photos (unless stated by) Marc Brenner.