James Clark discovers the things to do in Greenwich from visting the Cutty Sark to Climbing the O2 in his two days in London. 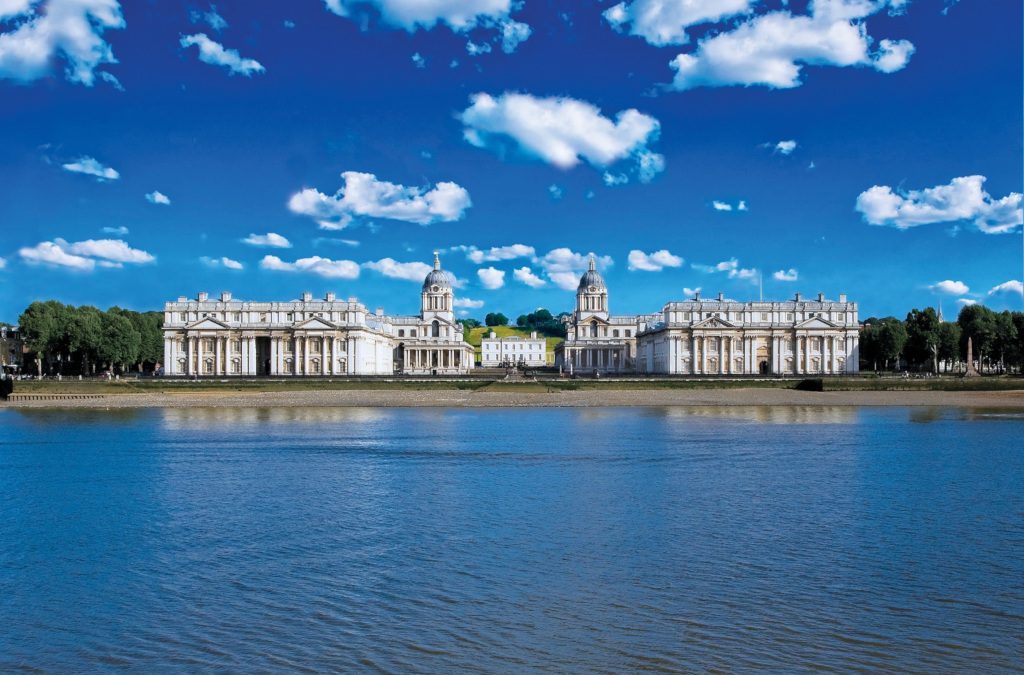 James Clark lived in London for many years, but never really spent much time in Greenwich, apart from the odd night at The George & Dragon on Blackheath Hill. So he accepted the invitation to discover the things to do in Greenwich.

I jumped on the Uber Boat by Thames Clipper from Embankment and enjoyed the sites of old and new London which the capital does so well, along the Thames to Greenwich Pier. The pier is located close to The Old Royal Naval College. The in house tourist office for an explorer map and the official Greenwich map & guide book was my first stop of the day.

The ORNC is built on the grounds of Greenwich Palace. Once favoured by Henry VIII and Elizabeth I – she was born at the palace. It gradually fell into disrepair and was demolished in 1694.

Not much remains of the palace, but there is an area in the visitor centre with items discovered during an excavation. One item found was the emblem of Henry VIII and Anne Boleyn – a real find as the King had them destroyed while Boleyn waited at the Tower of London to have her head removed. You can make a booking via the Old Royal Naval College’s website.

I was keen to learn about the Painted Hall which many have compared with the Sistine Chapel in Vatican City, so I joined the 1pm half-an-hour tour.

The hall was originally designed to be the dining hall for seamen staying on site, and the British artist James Thornhill was commissioned to decorate the 4,000 square-metre space. It took him 19 years to complete, but he must have felt an extraordinary sense of achievement on completion day.

The stunning ceiling artworks show naval successes, political changes and cultural achievements. It was considered to be far too grand for naval seamen to enjoy their meals in, and was opened to the fee paying public instead.

Famously it is where Admiral Lord Nelson was laid in state, in 1806.

Lunch at The Old Brewery

I decided to have lunch at The Old Brewery located in the grounds of the Old Royal Naval College. It made sense because I was aware that my time in Greenwich was limited to just two days and my aim was to fit in as much as possible.

The pub has two large outdoor seating areas. I was fortunate enough to be shown to a large table at the back where I enjoyed the sun, a pint of Meantime Tank Fresh Keller Lager – brewed fresh by maturation tanks in Greenwich, and a laugh with the young lady serving me. It was clear that the staff enjoyed their jobs, and a real pleasure to have lunch in a happy environment. And the lager tasted good, so good.

To start with I enjoyed heritage tomatoes, artichokes, rocket, basil pesto and toasted seeds. It tasted so fresh, so I ate it rather quickly. For main I devoured grilled chicken salad with little gem, avocado, broccoli, hen’s egg, smoked bacon, croutons, walnuts and roast garlic mayonnaise. It all worked magnificently together. I especially loved the crunch of the croutons and smoked bacon with hints of the roast garlic mayonnaise.

I didn’t stay for more food as I had scheduled to see that afternoon and had dinner booked at The Ivy Café in nearby Blackheath ahead of me.

The National Maritime Museum is large and it’s a fast paced challenge to get around in one afternoon. This wasn’t an issue for me as I planned to visit the Tudors to Windsors : British Royal Portraits exhibition before heading to the Royal Observatory.

The focus of this new display is the changing way in which the face of the Monarchy has been represented through the centuries. From the earliest known portrait of Henry VII, to Andy Warhol’s Elizabeth II, and every king, queen, prince, princess and occasional mistress in between.

It was a lovely 25-minute walk through Greenwich Park and up a steep hill to the imposing structure of the Royal Observatory, founded in 1676 by Charles II.

I wasn’t particularly interested in time keeping, but the Prime Meridian Line dividing the Eastern and Western hemispheres grabbed my attention. It runs through Greenwich from the North Pole to the South Pole and is the line that all longitude lines are measured. Am I going to pretend to understand it? Absolutely not, but it really is a must see and visitors love it.

To reach the Clarendon Hotel, where I was staying, I continued walking through Greenwich Park which was surprisingly flat after my earlier uphill wander, to Blackheath Common. The hotel is on the edge of the common and not difficult to find. The large red lettering spelling out the hotel’s name gave it away.

After a short rest, coffee, and a shower I headed to The Ivy Café at Blackheath for dinner.

The Ivy Café at Blackheath

The Ivy, originally a celebrity haunt has survived the test of time. As more establishments open up and down the country carrying The Ivy name, it may have lost a little of its exclusivity, but it’s charm and liveliness both remain.

My table wasn’t ready, so I happily sat on a stool at the bar and chatted with the barman, a cold glass of the Ivy Craft Beer in hand brewed in Scotland.

As expected my night at The Ivy Café was a show, and a show done well. Impeccably dressed staff were incredibly attentive and once sat at my table I ordered a Yuzu Negroni – roku handmade Japanese gin, stirred with campari, lillet rouge and akashi-tai yuzushu citrus sake, and took a look at the menus. Every dish on the dinner menu was calling my name.

As always the service was spot-on. I’ll take a guess that the Ivy Café Blackheath does really well.

A Tour of Greenwich

I arranged to meet tour guide Neil from the Greenwich Tour Guides Association, and after a swift introduction we headed to the Cutty Sark – the last surviving tea clipper. The ship is without doubt a remarkable site, but it was the story behind the name that captivated me.

Robert Burns’s poem Tam O’Shanter is the basis for the name Cutty Sark which translates into today’s language as ‘short dress’.

The story goes that after a night at the pub Tam started his journey home on horseback. But on his way, he noticed a group of witches and wizards dancing around a bonfire in a churchyard.

One of the witches was young and beautiful and wearing only a ‘short dress’. Tom couldn’t help himself and called out to the witch which alerted the group to his presence. A chase followed.

He knew that witches couldn’t cross water, so Tam and his horse raced towards the river Doon, but the beautiful witch was there waiting for him at the bridge.

Fortunately, they managed to escape, but the horse lost its tail in the process. And that’s how the Cutty Sark got its name.

Another story that fascinated me was the story behind The Queen’s House Art Gallery. King James I built the palace for his wife Anne of Denmark, after a disagreement which resulted in the King swearing at her in public. Anne wasn’t satisfied with the usual piece of jewellery apology, so the King gifted her own palace. Construction started in 1616, but the queen died three years later, long before the palace was completed.

The Queen’s House was finally finished in 1635, and King Charles I gifted it to his wife Henrietta Maria of France.

These are just a couple of the fascinating stories that Neil shared with me. It’s seriously worth spending a day or two wandering around the Old Royal Naval College, but my belly was rumbling, and I was pushed for time.

The boutiques, stalls and street food stalls under the covered Greenwich market are a hive of activity. The market was full of hungry visitors, queuing for and devouring street food spanning cuisines from across the world. Every cuisine I could think of was here.

I noticed another street food sign veering off to my right and ended up at a stall called Chai Junction just outside the indoor market. I ended up opting for an Indian homemade flatbread coated with egg, filled with paneer, salad, a squeeze of lime, homemade tamarind and coriander mint sauce. It was so good. The stall also does some interesting takes on chai tea. Be sure to check it out.

No visit to Greenwich would be complete without taking the Uber Boat just one stop to the North Greenwich Pier, and the ultra-modern Greenwich Peninsula and home to The O2.

As this was my first visit to The O2 I didn’t know what to expect, but I was blown away by its sheer mass. The O2 is home to the world’s most popular music, sport, comedy, and entertainment venues, and shopping at the Icon Outlet. I could have easily spent an entire day there.

But this wasn’t the reason for my visit. My predominant purpose was to climb The 02, which I had been apprehensive about since booking it.

Up at The O2 is the unique experience that gets you to the top of the structure on foot, following a health and safety video (it’s short I promise) and briefing, climbing shoes and getting strapped into a safely harness. I think there were about 16 of us in the group.

We were taken up some metal steps to start climbing the rubber pathway over The O2. It was steep in places, but easier than I had expected and not frightening at all. It was fun, and I had time to chat and laugh with other members in the group and brilliant guide Sarah during our climb.

We reached the top in about 20 minutes and paused for a while to get those all-important Instagram shots with Canary Wharf as our backdrop.

The climb down on the other side was a little more difficult, but if you can walk, you can climb The O2.

It was early evening so I headed back to the North Greenwich Pier to catch the Uber Boat back to Embankment. I was full of excitement from climbing The 02, and happily thought about some of the stories tour guide Neil had shared with me.

From Greenwich, I took the same route along the Thames that Queen Anne Boleyn had taken in 1536 following her arrest on charges of adultery, incest and treason. Unlike Anne, I passed the entrance to Traitors’ Gate and managed to keep my head.

A trip to the Royal Borough of Greenwich really brings British history back to life.

Things To Do in Greenwich

For more inspiration on what to do at Greenwich, visit: https://www.visitgreenwich.org.uk/. Both cover and background image provided by Visit Greenwich.

How to Get a Visa While Travelling to Turkey