Mark Bibby Jackson returns to the principality of his birth to explore both the countryside and castles of Wales, and forecast a very bright future. 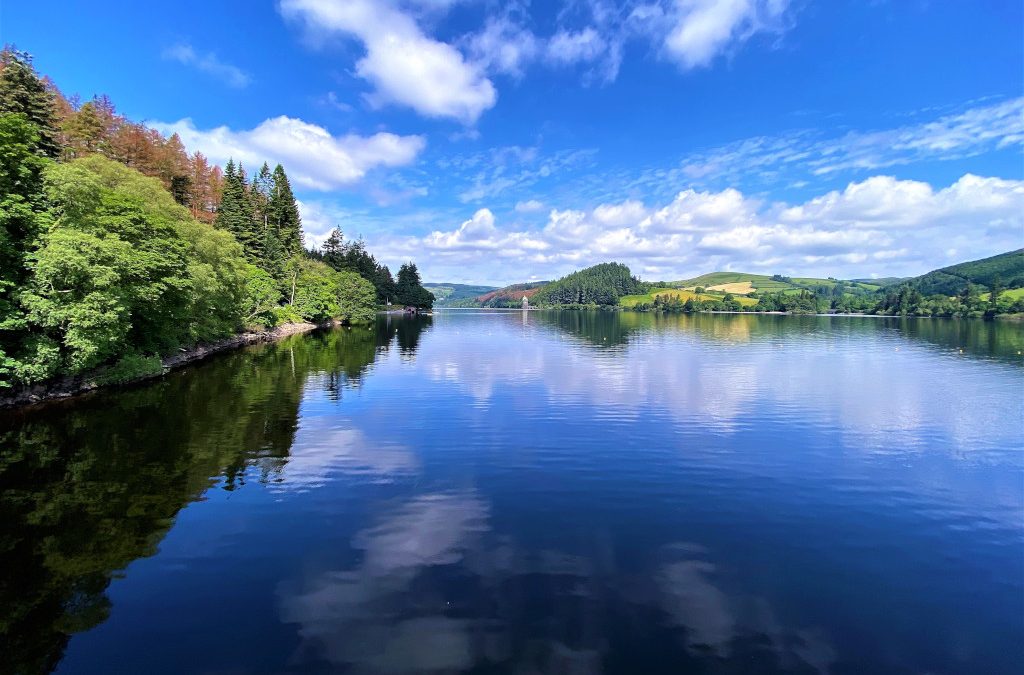 Mark Bibby Jackson returns to the principality of his birth to explore both the countryside and castles of Wales, and forecast a very bright future.

Staring across the magnificent Lake Vyrnwy soaking up the fresh air and breath-taking scenery while the sun takes its painstakingly slow descent behind the glorious hills I realise what I have missed most in the last year and a half – the magnificence of travelling. That and an absence of adjectives.

Our journey to Wales had started in Flint, where I had lived until the ripe age of three. The objective when originally planned more than a year previously was to retrace my first tentative steps before exploring the castles and countryside of Wales. Then Covid struck. So what was meant to be a journey into the past had transformed into a pristine picture of our future.

Not that there is anything particularly pristine about Flint. Having checked into our hotel, the Flint Mountain Park Hotel on the outskirts of town, we drove down to the River Dee for the town’s main cultural attraction.

Flint was one of the ‘new’ towns built by Edward I after his invasion of Wales in 1277. English were encouraged to settle and Welsh excluded. Flint Castle was one of 17 castles built in north Wales to help protect the English king’s acquisitions, 14 of them had towns attached as with Flint.

Now, the castle’s ruins make for a very pleasant stroll, one you can continue along the Welsh Coastal Path the whole length of the country all the way to Pembrokeshire in the South. The castle is surrounded by a green space which was reclaimed from the old Courtaulds textile factory, the closure of which led to an economic downturn in the area.

Although, Flint was the place where I spent my toddling years, it was not where I was born.

A short drive away lies the city of St Asaph. It is to here we head after a pleasant night’s sleep in the Oyo Mountain Park Hotel. Like Flint, St Aspah has one major draw. Unlike Flint, it is a cathedral – hence the city status, albeit only since 2012 – rather than a castle.

St Asaph Cathedral dominates the high street. So, while we were waiting for our breakfast coffee and scone to arrive at the excellent Jacobs Ladder coffee shop just across the road from the cathedral, I went exploring.

There has been a church on this site since the 6th century, although the current building dates back to the 13th century, after the original building was destroyed by Edward’s soldiers in 1282. It was rebuilt during the reign of Henry VII, after being sacked during the rebellion of Owain Glyndŵr, and then once more substantially restored in the 19th Century. It is claimed to be the smallest Anglican cathedral in Britain, and St Asaph is the second smallest city, after St Davids,

Despite the impressive ceiling and pleasant grounds, I did not have time to linger, as we had an appointment with history just along the north Wales coast.

If I had to choose one word to sum up north Wales it would be castles. Perhaps the most impressive of these is Conwy Castle, which lies just across the river of the same name from Llandudno.

The impressive chain suspension bridge leading to the town dates back to 1826 and was the work of Thomas Telford. Conwy is the most complete of Edward’s new towns. Possibly based upon the design of the French bastide towns, Conwy is a spectacular place. You can still stroll around the medieval town walls.

Built by Edward between 1283 and 1289, according to UNESCO, Conwy Castle is one of “the finest examples of late 13th century and early 14th century military architecture in Europe”, and who am I to disagree.

Walking around the castle you are spoilt for choice, whether to focus on the ruins lying inside the central courtyard or climb the towers to enjoy the spectacular views over the town, the suspension bridge and up the surrounding hills.

Inside one of the towers is a small chapel containing a garrison of flowers created in 2012 on stained glass by Linda Norris and Rachel Philips depicting the story of the battles between Welsh princes and English kings.

Rivalling Conwy for the title of the best castle in north Wales is Caernarfon.

Like Conwy, construction of the current Caernarfon Castle commenced in 1283, although work was never fully completed as the castle was sacked in 1294 during the rebellion of Madog ap Llywelyn.

The castle is probably best known for being where Prince Charles was invested as the Prince of Wales in 1969. An interesting video encapsulates the history of Caernarfon Castle in eight minutes.

How Many Castles Are There in Wales?

There are more than 600 castles in Wales, most of which were built after Edward I defeated Dafydd, Prince of Wales, in 1283. However, the oldest is Chepstow Castle dating back to 1067. Many of the castles are under the care of CADW: Welsh Historical Monuments, including both Conwy Castle and Caernarfon Castle.

As with Conwy Castle, the views are quite spectacular, this time leading off to Snowdonia one way and to the other across the Menai Straits to Anglesey.

From Caernarfon we took the short drove across the Britannia Bridge to the island of Anglesey. Heading east across the Menai Straits the view down to the Menai Suspension Bridge is astonishing, a word you could easily apply to Château Rhianfa.

You might be forgiven for thinking you had somehow taken a wrong turn and ended up in France. Built between 1849 and 1851 by Sir John Williams the first Baronet of Bodelwyddan, for his wife, Grade II*-listed Rhianfa was designed in the style of the Loire valley chateaux, which I visited shortly before lockdown.

The spectacular tapestry in the entrance hall reminded me much of that trip. The building is amazing and opulent with many a separate room for you to discover your own space – an essential for any current travel.

However, it is the amazing gardens that impressed most, especially on a sunny summer’s evening with Bangor University glimmering just across the waters on the mainland. Sitting on the terrace a local Anglesey gin and tonic I gloried in the view and readied myself for the evening meal, which would have befitted the finest dining rooms of any Loire chateau.

The following morning we drove along the coast past the popular town of Beaumaris to a local beach recommended by the helpful staff at Château Rhianfa.

Anglesey has developed something of a reputation for the quality of its beaches, and Benllech did not disappoint. Its vast open stretch of golden sound seemed endless, similar to those in Cornwall, but without the hordes of staycationers escaping city life. We could have lingered longer, but time and Welsh road trips wait for no man.

The Road to Lake Vyrnwy

The drive from Anglesey to Lake Vyrnwy (see main photo) took in all of North Wales countryside from the slate hills carved open beside Bethesda through mountainous Snowdonia and down towards Lake Bala.

Along the way we stopped at the side of the road for an impromptu picnic, accompanied solely by sheep who munched away impervious to our presence.

Lake Vyrnwy Hotel & Spa is perched above the lake with views that you would pay a fortune for if you were in the Alps. Slightly stressed from the drive – I am not a willing driver – I immediately found myself relaxed as much by the wonderful air as by the spectacular panorama. It was as if time had stood still.

The lake was dammed in the 1880s in order to provide water for the rapidly expanding city of Liverpool. The site was chosen due to the 400 streams that meander into the valley. The hotel itself was built the following decade so that the dignitaries of Liverpool could show off their engineering marvel.

Before dinner we settled on the terrace surrounded by chirping birds to enjoy the view down to the lake. These continued as we went inside to eat, as all the tables face outwards.

Our final day involved the longest drive all the way from Lake Vyrnwy to Pembrokeshire, a place I know well from recent walking along its coast park.

The scenery was amazing. Sometimes it was almost Alpine, at others it was rolling verdant countryside but always amazing.

We stopped at Brecon Beacons for lunch by the side of the road surrounded by sheep while I had a short stroll and took guidance from the extremely helpful staff at the visitors centre on the most scenic drive to Tenby.

This was the most spectacular part of our journey, with the barren terrain resembling the North York Moors.

Eventually we arrived in the tiny village of St Florence just outside of Tenby to stay at Elm Grove Country House. Set back of the main road by a longish drive, this lovely building has its own tennis court and croquet lawn in substantial grounds. Horses munched away in neighbouring fields, to help create an idyllic pastoral setting.

In the evening we retired to the friendly Sun Inn and immediately felt welcomed. The following morning our breakfast was served by the same woman who had cooked our meal the previous evening in the pub. Clearly, this is a close-knit community.

Wales might have changed considerably since my birth several decades ago, but if our journey is anything to judge, the hospitality of the people is incomparable, and the sector has a rosy future.

Both Château Rhianfa and Lake Vyrnwy Hotel & Spa are members of Welsh Rarebits Hotels of Distinction. With nearly 30 independently owned hotels spread across Wales coast and countryside, every member of the is different but all offer great Welsh hospitality, fine food and a personal welcome, members range from country house hotels, boutique boltholes and romantic retreats to relaxing spas and historic inns as well as tasty restaurants with rooms.

Elm Grove Country House is in The Rare Hideaways Guide, a unique collection of small, privately run properties which is part of the Welsh Rarebits Collection.

If staying in Flint while visiting the castles of Wales we recommend the Flint Mountain Park Hotel, which has comfortable rooms around an outdoor courtyard, and a spacious garden by the pub/restaurant. It is excellent value for money.

For more information on Wales Holidays

Barbados Travel Getting Back to Normal