Mark Bibby Jackson takes the steam train up Mount Rigi on the oldest mountain railway in Europe, celebrating its 150th anniversary in 2021. Mark Bibby Jackson is fortunate enough to take the steam train up Mount Rigi on the oldest mountain railway in Europe, celebrating its 150th anniversary in 2021.

The sound of cow bells jingling in the background, the reinvigorating smell of the fresh Alpine air, the perfectly manicured green slopes; these are the reasons why Switzerland has become one of my favourite countries to visit. But for a brief interlude the silence and freshness of the mountains is disturbed as our smoky steam engine chugs its pained way up the slopes of Mount Rigi, the Queen of the Mountains.

At first I sit inside the carriage as the #7 locomotive, built in 1873, navigates the cog railway tracks up the mountain from Vitznau station on the bank of Lake Lucerne.

The scenery is typical Swiss breath-taking as the lake first appears on our left and then shifts to the right as if by magic. After a while we make a stop for the engine to cool down and for the mechanic to stoke the furnace with more coal.

By now we have acquired something of a crowd. The fine weather has brought lots of local tourists to the mountain. Although many trains run along these lines, ours is the only one that resembles Thomas the Tank Engine. A complex manoeuvre ensues to allow the faster trains to pass us both up and down the tracks before we continue ever upwards.

Eventually it is my turn to move outside and stand just in front of the locomotive that always sits on the down-mountain side of the carriage, ie. behind us on our ascent.

Now I can really hear and smell the engine, and see the locals waving at us as we progress up the mountain. Not since my tuk tuk travels around northern Thailand have I felt so much at one with the local inhabitants in my voyaging. Then, they would smile at us amused to see their tuk tuks careering around mountain roads. Here you sense the Swiss are celebrating the marvel of their own engineering. This is one of those travelling moments when you really feel alive even with the soot landing on your face like black snow.

History of the Mount Rigi Train

Our #7 locomotive was retired in 1937 and afterwards moved to the Swiss Museum of Transport in Lucerne. The grand old lady of Swiss railways was taken out of retirement to celebrate the 150th anniversary of the railway’s opening.

The original journey only went as far as Rigi Staffelhöhe, although now you can progress until just below the summit at Rigi Kulm. At some 1,762 metres surely this is one of the most scenic railway stations in the world. It is here that our journey concludes with the most spectacular panorama imaginable. Mount Rigi weather is unpredictable, but we are fortunate to arrive with the sun out and the clouds high enough to present spectacular views down towards the lake. You really feel like you can see all of Switzerland. Once all the trains have left all you can hear is the jingling of the Alpine cowbells.

A Stroll Around Lake Lucerne

The previous night we had stayed in Lucerne, walking around the lake from the Chapel Bridge towards the Swiss Museum of Transport to which #7 will return once the celebrations have died down.

Chapel Bridge was built in 1333, and is one of Switzerland’s major landmarks. Sadly it was bunt down in 1993, so little of the original structure remains. Still an impressive structure, some of the original paintings have been preserved.

That night I had seen many a local taking a late evening dip in the refreshing waters, so in the morning I resolved to have a dip myself shortly before breakfast. The lake was surprisingly warm and thoroughly invigorating.

After my swim, we started our journey from Lucerne to Mount Rigi with a ride on the paddle steamer Stadt Luzern. Built in 1928, it is the flagship of the Lake Lucerne Navigation Company. Just as with #7 locomotive, the steam engine is real.

Before the rest of our passengers climb on board I have the opportunity to view the gleaming engine room and the wheels, as well as the magnificent Art Deco saloon. Then I rest at the rear of the boat as we become consumed with fellow passengers – Swiss daytrippers out to make the most of the spectacular weather.

After the best part of an hour we disembark at Vitznau where for a wonderful lunch at the Hotel Vitznauerhof overlooking the lake, after which we start our long journey up to Rigi Kulm.

Blessed Are the Cheesemakers

That night we descend the mountain from the Rigi-Kulm hotel – it is the only one – to a nearby hut where we are shown how cheese is made before tasting some raclette.

Our endless day concludes by waking back in the middle of the night, our stomachs full of wonderful Swiss cheese and our way guided by moonlight, stars, Swiss wine and the errant noise of nearby cowbells. We arrive back at our hotel in one piece.

Although Rigi Kulm is the end of the line, it is not quite the summit of the mountain. So in the morning I make the short 36-metre ascent to the summit, just in time to see a rainbow breaking tentatively through the clouds.

Our return journey down the mountain is by a more conventional train. This time we descend to Arth-Goldau on a separate branch of the Rigi Railway line.

From here we can take a train back to Zurich for our flight back home, however we have chosen to make one final stop on our way. The Lindt Home of Chocolate was opened in Kilchberg in September 2020 by Roger Federer.

Nestled next to the Lindt chocolate factory, this really is a Willy Wonka of an experience, with information on the 5,000 years of the history of chocolate from the Mayans to Europe. Its highlight is the nine-metre-high chocolate fountain in the foyer which has 1,5000 kilos of chocolate rotating in a constant loop.

Inside you can taste the warm chocolate as it oozes from tubes, or sample the array of Lindor on offer – my favourite was the salted caramel. It is also the perfect place to conclude your journey to Switzerland, as you will inevitably purchase some chocolates from the gift shop for friends and family back home. 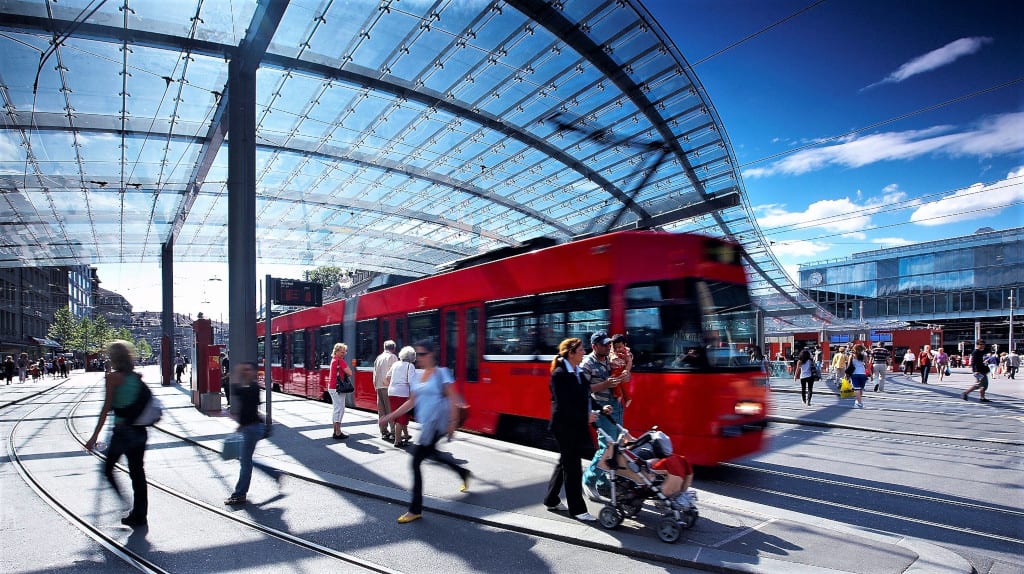 Best way to travel around Switzerland is by train, bus and boat. The Swiss Travel System provides a dedicated range of travel passes and tickets exclusively for visitors from abroad. The Swiss Travel Pass offers unlimited travel on consecutive days throughout the rail, bus and boat Swiss Travel System network. This pass covers scenic routes and local trams and buses in around 90 towns and cities. The Swiss Travel Pass also includes the Swiss Museum Pass, allowing you free entrance to 500 museums and exhibitions. Prices from £186 for a three-day pass. For the ultimate Swiss rail specialist call Switzerland Travel Centre on 00800 100 200 30 or visit www.swisstravelsystem.co.uk.

I took the Heathrow Express non-stop train service from Paddington station to Heathrow. With its electric trains taking 15 minutes, it is the fastest, most reliable and sustainable way to travel to and from Britain’s hub airport.