A Cottage in the Wood and a Land Rover Experience

Mark Bibby Jackson stops of at the Cottage in the Wood hotel just outside of Malvern to enjoy the breath-taking views and amazing food before getting stuck in the mud on a Land Rover Experience. 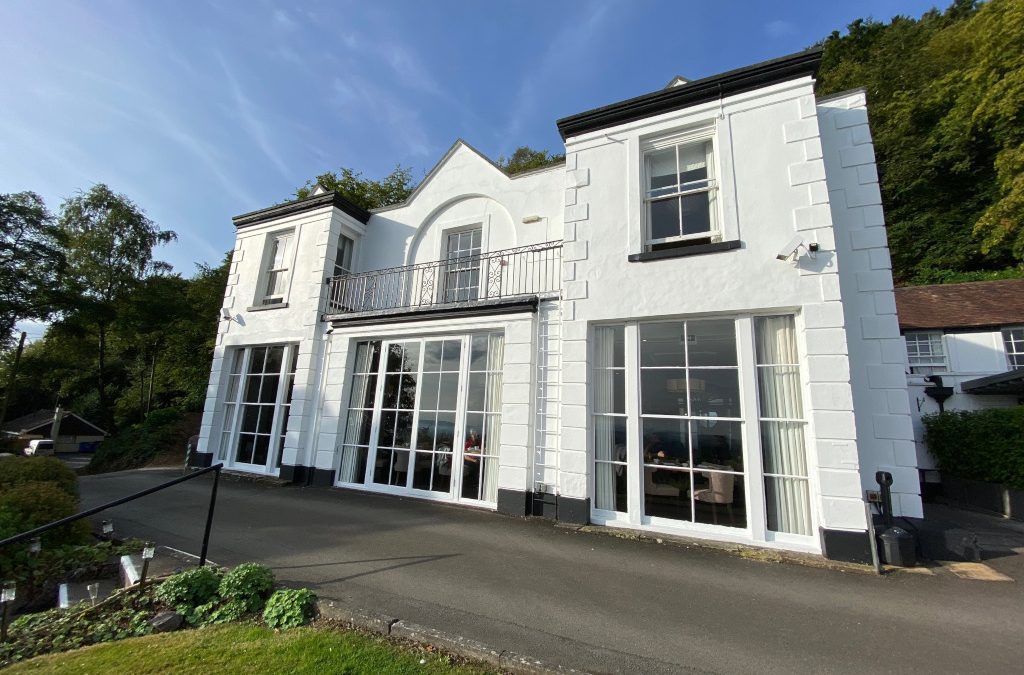 A Cottage in the Wood and a Land Rover Experience

Continuing his journey from Stoke to Cardiff, Mark Bibby Jackson stops of at the Cottage in the Wood hotel just outside of Malvern to enjoy the breath-taking views and amazing food before getting stuck in the mud on a Land Rover Experience.

I rev the engine but my Land Rover doesn’t seem to want to go forwards however hard I urge it. “Stop,” I hear the somehow still calm voice of Swany talking to me through the walky-talky. It appears as if my Land Rover Experience has come to a muddy halt on the grounds of the Eastnor Estate. “Now put it in reverse,” he continues.

The mud of Eastnor and the over-revving Jaguar Land Rover engine had seemed a million miles away earlier that morning as I strolled through the Malvern Hills under clear blue skies.

A Stroll in the Woods

The previous day I had checked into the Cottage in the Wood hotel, just outside of Malvern, and picked up a map of the ‘woods’ from reception. So after an excellent eggs Florentine and granola breakfast, I set off on my trek.

The weaving path took me through the eight acres of woodland just behind the cottage up to Perseverance Hill where I was afforded spectacular sweeping views across to what I assumed was the Wye Valley. To the other side I could make out the steeple of Victorian spa town of Malvern and the distant Cotswolds. It was quite simply amazing. No wonder that the Malvern Hills attract walkers from all over the country.

However wonderful the vista from atop the hill, the woods themselves were equally enticing. Here there were only squirrels and birds to disturb my calm, rather than the occasional rambler chatter.

A Literary History of the Cottage in the Wood

Not that you have to climb the hills to enjoy the views, as those from the ‘cottage’ are equally amazing. Just in front of the restaurant is a small garden where earlier the willing staff had set a table for my breakfast, so I could watch the morning mist hovering just above the Severn Valley far below. It really was spectacular.

The Cottage in the Wood was built as part of the Blackmore Park Estate in late 18th century, and owned by Thomas Charles Hornyold and later on by John Vincent Gandolphi.

The cottage has a long literary and music tradition. Tolkien often visited the Malvern Hills in the 1930s and went walking here with his good friend CS Lewis. It is rumoured that Tolkein came up with the name of Gandalf after hearing of Gandolphi. Also the White Mountains between Rohan and Gondor in The Hobbit are apparently based on the author’s observations of the Malvern Hills.

Land of Hope and Elgar

The Cottage in the Wood also has a link with the composer Edward Elgar, who was born in the village of Broadheath in Worcestershire in 1857. Elgar lived his whole life in the surrounding area, and was said to be inspired by the Malvern Hills and would form compositions in his head while out walking. In the 1920s, Elgar performed a violin recital in the Coach House.

More recently, The Cottage in the Wood was said to be a favourite of Margaret Thatcher who stayed in The Blue Room.

The place has undergone an extensive renovation since 2015, creating a chic 32-bed boutique hotel in the 2020s. This included a complete overhaul of the Main House, the Coach House and Beech Cottage, as well as the opening of a new outdoor terrace where I enjoyed my breakfast’s views.

Cottage in the Wood Rooms

My dog-friendly room on the ground floor of the Coach House had a wonderful little terrace where I could sit once more to enjoy the views.

It was wonderful relaxing outside in the early morning listening to the birds chirping away surrounded by all this greenery. My only company was a squirrel who came bounding along the terrace outside my room.

The recent refurbishment has included several nice touches including a record player so I could enjoy some Beatles, Stones, Massive Attack or even Elgar during my stay. The bathroom is really well equipped.

Cottage in the Wood Restaurant

In the evening I dined at the Cottage in the Wood’s two AA Rosette 1919 Restaurant led by head chef, Rob Mason, who joined the hotel in November 2020. Mason has a commitment to sustainability with all produce sourced locally through independent and family-owned suppliers, including Cotteswold Dairy.

An excellent amuse bouche consisting of a curried fish cake invigorated my taste buds. This was followed by a refreshing tomato salad with marinated Isle of Wight tomatoes and buratta, and a pan-fried cod as a main. Cod is not my favourite fish as I often find it rather bland. But following the maitre-d’s recommendation I was not to be disappointed. Served in the most delightful light champagne sauce the inherent nothingness of the fish was compensated for by the saltiness of the caviar and samphire that accompanied it. This was a resounding success.

The pre-dessert of a raspberry sorbet meant that I had enough space for dessert, a wonderful mix of chocolate cremeux, hazelnut and ice cream that on another night would have proved a highlight if it were not for the wonder of the cod.

All of which leads me back to the nearby Eastnor Estate and my Land Rover Experience. The Jaguar Land Rover centre is set next to the idyllic village of Eastnor, which would be blissful if it were not for the posse of Land Rovers that course their way through the narrow streets and country lanes en route to the estate grounds for testing. Or in my case to allow wannabe rally drivers get stuck in the mud.

In truth I had a certain amount of reticence about the Experience for I am not the most skilled of drivers. But having spent a decade in Cambodia I felt that I had at least a fair knowledge of off-road driving. And initially, despite a certain over-eagerness on the brake, I felt relaxed as we passed the local school without maiming an infant and then progressed along a path through the Deer Park in the Estate. Perhaps Cambodia had been a good training ground after all.

It was only when my tutor Swany, who was driving the car ahead of me as Covid precautions forbade us from sharing a car, informed me that the path ahead was going to get narrow that I realised the challenge that lay ahead.

At times there seemed barely an inch or so of leeway on either side of my vehicle as I tried to follow Swany both literally and metaphorically as we drove along the rutted path. Then I managed to lose steering altogether and became stuck in the mud while trying to forge ahead. Pointless wheel spinning ensued.

Following Swany’s directions I put the car into reverse and then attempted the hill once more. This time while trying to keep my tyres relatively straight. I soon discovered this was the art of navigating the Land Rover experience without auditioning for Bambi on Ice. That and holding the steering wheel as gently as possible however tense I might have felt as the car seemed to take control of proceedings itself. And really that was the final lesson – the Land Rover Defender was so sophisticated that I had no need to put my foot on the break at all. Just a little acceleration and a straightness of the wheel was required on my part, so soon I was able to enjoy the experience thoroughly.

The muddy path safely negotiated we emerged from the woods into the Deer Park, where Swany showed me the best view of Eastnor Castle below. From here we could see five or so counties, Swany was unsure. A view to compare with that from the Cottage in the Wood? Perhaps, not. But at least I had manged not to leave my charge stranded in the mud.

I bade adieu to Swany, who was kind enough to say that my driving was fine, and my tendency to veer to the left was perfectly normal. Veering to the left – now that is something on which Baronness Thatcher would hardly have approved. With these thoughts in my mind I continued my drive towards Cardiff.

The Cottage in the Wood Malvern

For more information on the Land Rover Experience Day or Half-Day excursions or to book your drive, click here.

All photos by Mark Bibby Jackson, or Swany.