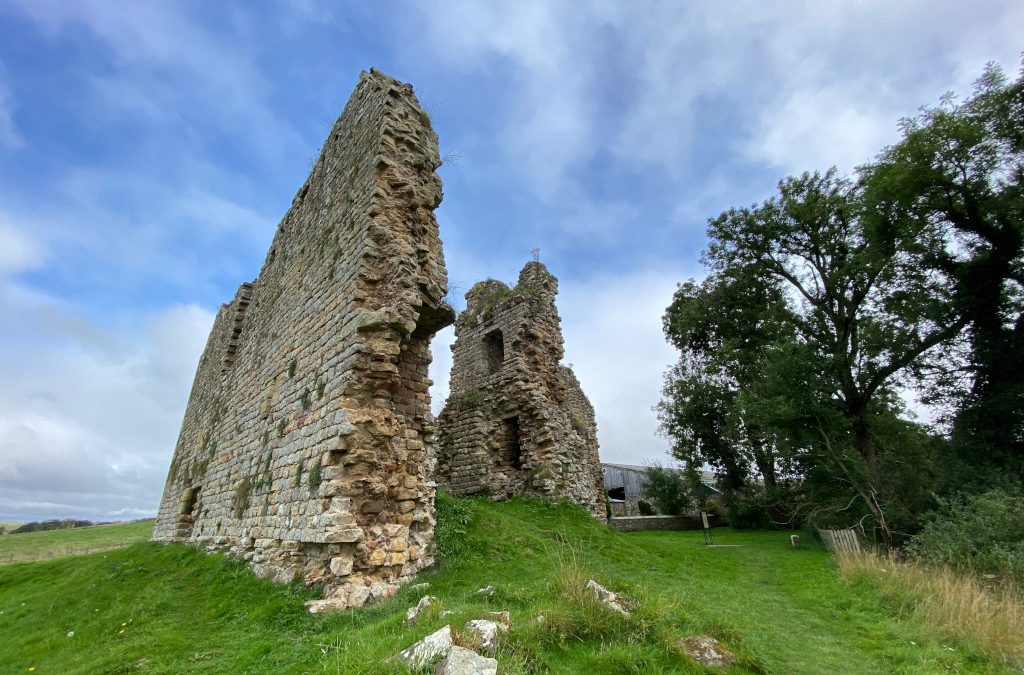 Few parts of England are as steeped in history as the village of Gilsland, equidistant between Hexham and Carlisle. Located along a long segment of Hadrian’s Wall, the surrounding area is littered with ancient remains as well as affording great walking opportunities.

Just beyond the village along a long drive lies Gilsland Hall, itself a hotel with a rich history. The original building dates back to the mid-18th century and was called The Shaws, from the old English word for a small woodland. It was visited by both Rabbie Burns and Sir Walter Scott.

Indeed, it is at the nearby Popping Stones located half a mile from the Gilsland Hall Hotel in a secluded glade that the latter is said to have proposed to his future wife, Charlotte Charpentier.

The original building burned down in 1859 and was rebuilt on a grander scale by G. G. Mounsey, the first elected mayor of Carlisle and a local landowner.

The Co-operative Wholesale Society bought Gilsland Spa, as it was subsequently known, in 1901. It became a convalescent home in the early 1900s, and was used as a hospital for soldiers to recuperate during the First World War before returning to the front line. In the Second World War it acted as a maternity hospital.

Locals still refer to the Hall as locals refer to as Gilsland Spa, partially due to the sulphurous spring that issues from a cliff below the hotel.

Walking in the Grounds

After checking in, I immediately head for the woods at the rear of the Gilsland Hall. The hotel’s grounds are spread over 140 acres, many of which lead down to the River Irthing, where guests can fish or visit the sulphurous spring.

The walk is easy and pleasant, although a bit steep upon the return, and the slightly sulphurous aroma hints at the therapeutic quality of its waters. There was so much space here – just me and the noise of the wind rustling through the leaves. The air felt really fresh once removed from the spring.

The more athletic rambler can go on walks through Irthing Gorge, or onto the 266-mile Pennine Way which passes within a couple of miles of the hotel. Or you can always try to find Scott’s Popping Stones, especially if you have a particular question to ask someone.

Instead I set off for the village of Gilsland, where there is a well-preserved section of Hadrian’s Wall. Apparently you can walk to the wall across National Trust land from Gilsland Hall, but we drive down to the car park just outside of town, from where you can see the wall.

I follow the Hadrian’s Wall Path half a mile to Willowford, where there is the remains of a turret, part of a Roman watch tower. The Romans used the wall from 122 AD to 410 AD. Soldiers were garrisoned here to make sure the Scots did not go a wandering. At its base is a hearth used for cooking and keeping warm. A stair would lead to the first floor viewing platform.

Hadrian’s Wall Path is well marked and easy to follow. I continue as far as two Roman bridges that were built between 122AD and 207AD across the River Irthing. Now they resemble the remains of a building as the river’s direction has changed and a more modern bridge crosses it nearby.

It is not hard to work out why The Shaws was built in this location. The setting is quite magnificent with wonderful views across the rolling hills of the Cumbrian countryside – the border between Cumbria and Northumberland passes through the middle of Gilsland.

I gaze into the distance while waiting for an appropriate time to take dinner.

In truth Gilsland Hall is a little run down and in need of a bit of TLC. This is something that its new owners Stratsmore Holdings, recognise. Later this year the property will be closed and later reopened as part of the Black Book Hotels brand run by the Monday Hospitality Group after a multi-million pound refurbishment.

The new luxury 5* country house hotel will open in 2022, and is planned to include luxury suites, and iconic spa facilities. This could become a great retreat for groups and family gatherings, as well as a wedding venue. I certainly plan to return.

Dinner in the Orangery

Consequently I was not expecting the best from our dinner, fearing the kitchen might too be living on borrowed time. The 70s-style suspended ceiling in the Orangery restaurant did little to assuage my concerns.

So I was amazed to be served one of the finest meals I have tasted in my recent travels around the UK.

To start I had hummus served with pine nuts and a selection of heritage carrots. This was followed by a roast celeriac on a bed of lentils. Only once have I experienced my favourite root vegetable cooked better, and that was at the amazing Nobelhart & Schmutzig restaurant in Berlin, one of the top 50 restaurants in the world, where the chefs have considerably more facilities with which to work than at Gilsland Hall hotel. My companion said that the steak was the best she had tasted in years, and she has had a few.

With the friendly mother and son team who worked the restaurant providing me with useful tips for things to do the following day, as well as the local lowdown on the history of Gilsland Spa, I discovered my evening to be far more enjoyable than I had anticipated.

Assisted by my local font of information and fuelled by some excellent poached eggs at breakfast, I set off for a couple of the local attractions.

Thirlwall Castle (main image) was built by John Thirlwall in 1330 using Roman stones taken from Hadrian’s Wall. The property remained in the family until 17th century when it was abandoned. It was acquired by the Northumberland National Park authority in 1999.

Just a couple of miles outside of town, I park my car beside the row of red brick houses in the car park, as instructed. Then I walk the short distance along the river to the ruins. If you like your castles to be ruined, as I do, then Thirlwall is one for you. I could imagine that it would be extremely atmospheric when covered in mist.

On my visit the weather was fine, so I could enjoy the great views and a take a few moments to smell the fumes from a fire in a nearby farmhouse as they drifted up towards the heavens. You can also reach Thirlwall Castle by walking along the Hadrian’s Wall Path National Trail.

My final destination takes me back through Gilsland past Birdoswald Roman Fort and on to Lanercost Priory, which was founded by Robert de Vaux between 1165 and 1174. The site, like Birdoswald is managed by English Heritage and there is a fee to enter. However you can wander freely around the churchyard and the adjoining Mary Magdelene church, which is what I choose to do.

With such great walking opportunities, whether along Hadrian’s Wall or thought the open countryside, my only regret is that I do not have longer to stay. But there again this leaves me plenty to explore on my next visit to the village. Perhaps by then Gilsland Hall will have been refurbished providing me with another excuse to return to these wonderful part of England.