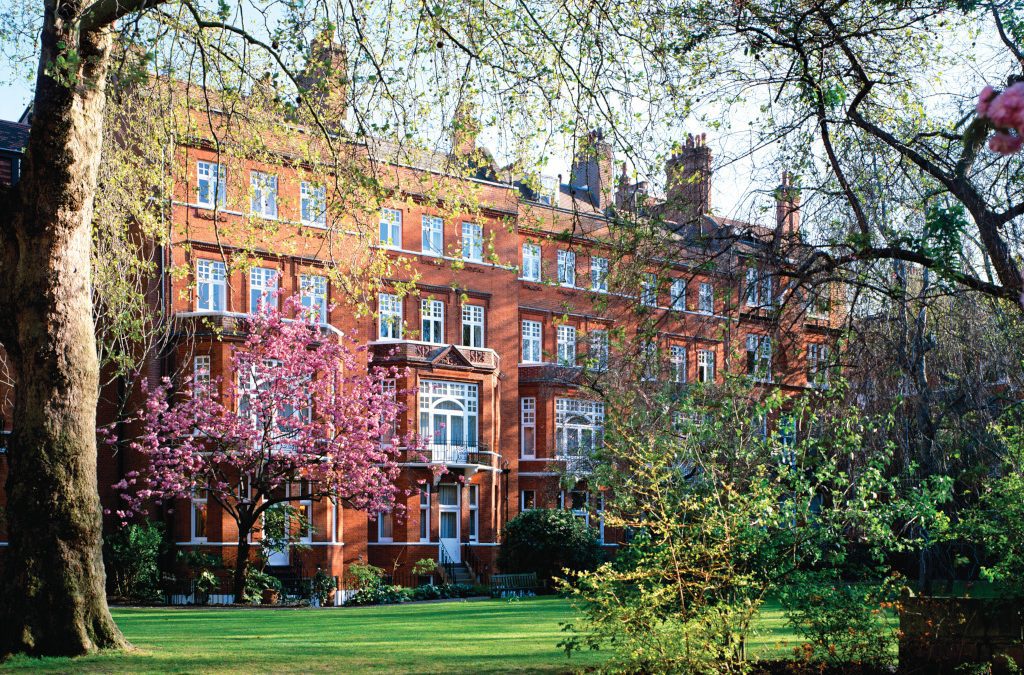 Entering the Mantis Draycott Hotel is like stepping back in time. The red brick late Victorian townhouse that was built in 1890 is replete with tasteful period antiques, beautiful paintings and tasselled soft furnishings. The walls are furnished with relics including prints, antique posters and photographs of some of London’s theatrical and artistic luminaries. However, it is the courteous and efficient service that impresses me most as I am whizzed politely to my wonderful room – the Vivienne Leigh suite, named after the star of Gone with the Wind.

This is one of the many beautiful touches at the hotel in the heart of Chelsea, just around the corner from Sloane Square – all the rooms are named after stars of stage and screen.

The boutique hotel has 35 individually designed bedrooms and suites. Ms Leigh overlooks the private garden, which like many in the area is shared with neighbouring properties.

My garden suite had an escritoire as well as a very comfortable sofa set beside the faux coal fire. Very homely – this was the place to bunker down during lockdown. My room also had the most stupendous views of the communal gardens to the rear which as my stay coincided with the start of autumn, were at their proudest. Most rooms, including mine, have a working fireplace. The bathroom had a power shower which worked a treat as I discovered the following morning as I had to awake for an early morning zoom meeting.

The property consists of three buildings – numbers 22 to 26 – with a maze-like corridor interlinking them, which somehow adds to its character. In addition to the basement restaurant where I took breakfast the following day, there is a small library where you can spend time pontificating, as well as a larger drawing room, which opens out onto the garden.

It’s here that guests can enjoy complimentary beverages starting with tea and homemade biscuits in the afternoon from 4pm, a glass of sparkling wine from 6pm and hot chocolate before bed from 9pm. There is also a beautiful walnut honesty bar that guests can use later in the evening, plus a selection of board games and books.

Dino, who has worked at the hotel since 1994 and has himself become part of the furniture, showed me around the property. Pointing out the portrait of Lady Astor above the staircase in the reception, as well as watercolours of Cliveden in the drawing room.

The property used to be part of the Cliveden Group before it was taken over by Mantis. Dino explains that the reception is in the style of Cliveden, the Italianate mansion house overlooking the Thames in Buckinghamshire, of which there is a portrait in the drawing room.

The portrait of Lady Astor is a replica of the one at Cliveden, as is the Joshua Reynolds in the library, although others are originals, according to Dino. I get a strong sense of family here; it feels more like a residence than a hotel.

One of the more striking elements of the hotel is the selection of rhino mascots that are on display, and available to purchase, at reception. Mantis stands for Man And Nature Together Is Sustainable. The conservation-focused hotel group has more than 20 luxury hotels, eco-lodges and waterways experiences across the globe. Together with its partner, Accor, Mantis created the charitable foundation, Community Conservation Fund Africa (CCFA), which commissioned a community of unemployed women in Kylemore, a village in South Africa to hand sew the rhinos.

Each one is named in honour of fallen rhinos who were killed by poachers in South Africa, with the exception of Munu, a southwestern black rhino – a severely endangered subspecies of which there are only 250 left in the world – who lives at Mantis Founders Lodge having been rescued after a battle with another rhino. Profit from sales of the mascots supports CCFA community conservation initiatives across Africa.

Mantis Draycott Hotel is also committed to sustainability closer to home as a member of the Green Tourism for London Scheme.

Furniture is repaired, refurbished and reupholstered where possible rather than replaced, walking map routes are offered to encourage guests to limit car use, and old linen and towelling is donated to charities. They also buy local where possible and seasonally, or from responsible sources, such as triple certified rainforest alliance, Fairtrade organic coffee. Even the laundry uses eco-friendly chemicals.

The hotel is located close to Sloane Square with its brilliant Royal Court Theatre, and Chelsea’s famed Kings Road and the Saatchi Gallery. However, it is to another local attraction that I head the following morning after a wonderful meal at The Gate restaurant the previous evening.

The Chelsea Physic Garden is the second oldest botanical gardens in England after Oxford. It was founded in 1673 by the Worshipful Society of Apothecaries of London, just eight years after the Great Plague.

The garden is almost four acres in size and contains a few thousand species of plants. I am given a free tour of the garden by David, a volunteer guide, which starts at a sculpture of Sir Hans Sloane, an early benefactor, at the centre of the gardens. The fact that the Garden is still here is largely due to his largesse, as he agreed a ground rent of £5 per week in perpetuity.

There is also a small café, and some wonderful glasshouses. If you miss one of the tours that set off around lunchtime there are numerous information boards littered around the gardens to guide you.

This is a lovely place to sit and relax especially in a sunny autumnal day, and the perfect way to end my night and a day in London, lost in the past.