Climate-Friendly Travel Writer Mark Bibby Jackson suggests you might consider travelling to Sustainable Switzerland for your next holiday. 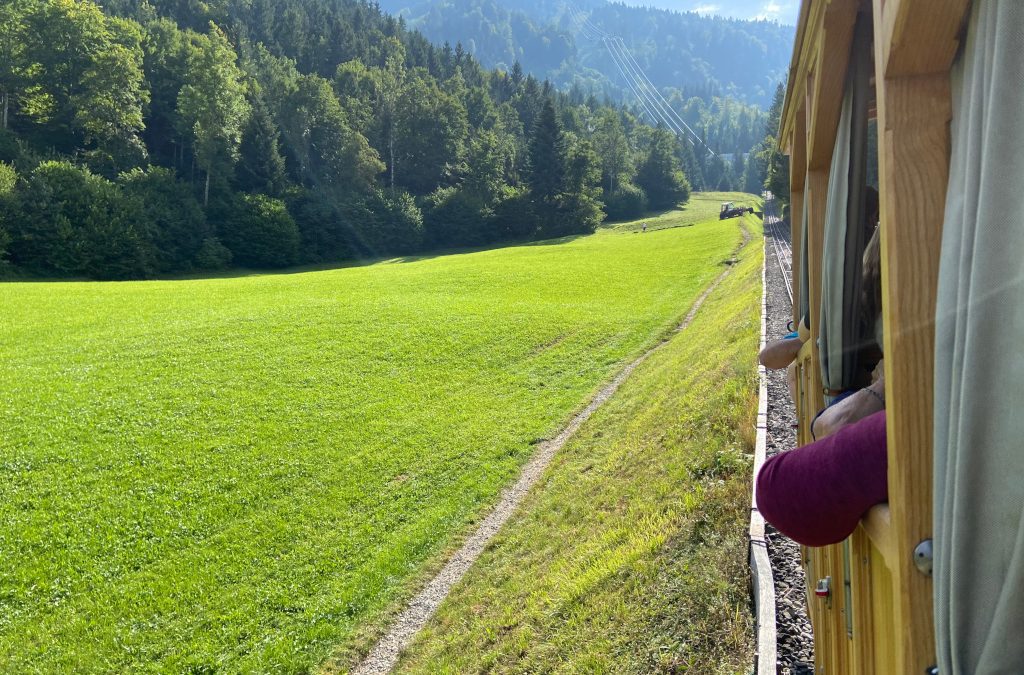 Climate-Friendly Travel Writer Mark Bibby Jackson suggests you might consider travelling to Sustainable Switzerland for your next holiday.

With the red list now officially a thing of the past – at least for now – we can all start planning our next escape with a bit more confidence than last year. If you are thinking of minimising your carbon impact you could do far worse than considering going to Switzerland for your next travels.

One of the great attractions of travelling to Switzerland is the ease with which you can get around by public transport once there.

Undeniably the most sustainable way to travel around Switzerland is by train, bus and boat – unless you want to bike or hike it, although it is easy to combine public transport with both. The Swiss Travel System provides a range of travel passes and tickets exclusively for visitors from abroad. Its travel pass offers unlimited travel throughout the rail, bus and boat Swiss Travel System network, including scenic routes and local trams and buses in around 90 towns and cities.

This summer, I was fortunate enough to travel around Switzerland by train, taking the oldest mountain railway in Europe up Mount Rigi, which has been celebrating its 150th anniversary this year. It was an amazing experience standing in front of the old steam locomotive engine chugging its way up the mountain to Rigi Kulm some 1,762 metres above the sea level or in reality somewhat less above Lake Lucerne glistening in the sun below.

Rigi is by no means the only mountain railway in the country. On the same trip I also rode on a cog wheel train to Rochers-de-Naye, some 1,600 above Montreux on the banks of Lake Geneva. The journey takes about 50 minutes during which we were engulfed by spectacular views on either side as you make the steady climb towards the summit.

Eventually we reached the summit at 2,025 metres. Our guide called these the pre-Alps, as the Alps themselves so he claimed only start at 3,000 metres. The building at the top was built in 1895 and the railway opened a year later. A short climb above it is the viewing platform that affords 360-degree views of the real Alps, including briefly through a window in the clouds on our visit the Eiger. The service runs throughout the year, with special jazz trains for the Montreux Festival, as well as cheese and chocolate themed rides.

Although we took the train from Lausanne where we were staying at the magnificent Lausanne Palace hotel with its sweeping view of lake, we decided to take the boat back. However, it wasn’t just any old boat but La Susie, a beautiful old steamboat built in 1920. The journey back with the sun slowly making its descent into the waters was quite magnificent.

Swimming in the Lake

The following day we transferred by train to Lucerne, but while my colleagues visited Lausanne’s Olympic Museum, which I had seen on my previous trip to the city, I decided to take an early dip.

The previous day as we returned from Montreux I had noticed how many people were swimming in the lake. I would have joined them if it were not for my lack of swimming costume, so that morning I decided to rectify my error.

Getting to the lake from the hotel is simplicity itself. Lausanne has the only metro system in Switzerland which runs along the route of the old funicular. There are only 14 stops taking you from the centre of town to the lake.

Opposite the Hotel Angleterre et Residence, which takes up the building where Byron stayed when he wrote The Prisoner of Chillon in 1826, is a small pontoon built earlier this year. This information I learn from Nicole, a native of the city and the only other person brave enough to brave the waters of the lake this Monday morning – perhaps all the bathers were at work. So as they slaved away, Nicole and myself took it in turn to swap tales between swims.

It really was incredibly tranquil, and despite a slight haze upon the water the views were beautiful, and the water was pleasantly tepid. It was the perfect way to relax before my train ride to Lucerne, which was hardly exactly strenuous itself.

Although our main reason for coming to Lucerne was to ride upon the Mount Rigi Railway, this was not the only sustainable rail excursion we took from the German-Swiss city.

Taking the short train ride to the town of Stans, we then travelled up to the Stanserhorn, initially by funicular. When it was built in 1893 this was the longest funicular in the world. Unfortunately it was destroyed by fire as was the hotel at the Stanserhorn itself. The first section of what now remains runs along the tracks of the original funicular, but the remaining part of the journey is now by open deck cable car. When it first opened in 1975 it was the first of its type in the world. The current Cabrio cable car opened in 2012.

Standing in effect on the roof of the cable car, as if you are on the upper deck of an open top double decker bus, the views all the way down to Lake Lucerne were astonishing, although I must admit that my fear of heights precluded me from taking a front row view.

At the top we were taken for a short walk around the 1,898-metre peak by one of the rangers. Then we had lunch at the Rondorama restaurant which consisted of älplermagronen, a cook-it-yourself macaroni hotpot dish that is extremely popular with the local herders. On our walk the ranger informed me the reason why the green slopes in Switzerland always look perfectly manicured is because they are. People are employed to cut the grass by machine or on occasion if the slopes are too steep by hand. It is a hazardous profession. On our way back I noticed one of the grass-cutters at work, fortunately for him, using a machine.

Switzerland is a wonderful country to explore by train. Best of all, the country has embraced sustainable tourism in a way that few other nations have, developing its own Swisstainable sustainable tourism brand, ensuring that you can keep your own carbon footprint to the minimum.

You might even consider taking the train there to minimise your contribution to global heating even further. And if time precludes this, then I recommend you offset your travel, as I now do, with Trees4Travel, a wonderful organisation that is planting trees, restoring ecosystems and maintaining forests to remove CO2 from the air. It will offset the carbon generated by your flight for the price of a cup of coffee – and even at Swiss prices that really is a global bargain.

A Wales Road Trip through History