Mark Bibby Jackson goes on a week camping in Brittany and Normandy to discover there is so much to the area once you are out in the open. 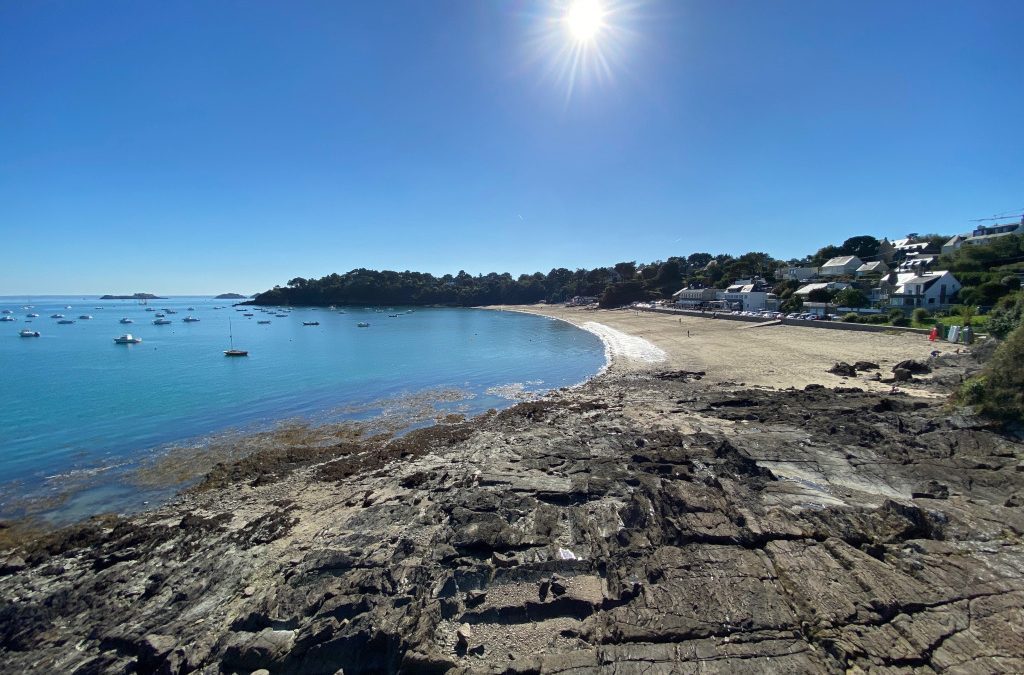 Mark Bibby Jackson goes on a camping holiday to Normandy and Brittany to discover there is so much to the area once you are out in the open.

I had not quite known what to expect on our week’s camping holiday in France. I had spent a few days in a camping park in Cornwall a couple of years ago, but I did not know how the experience would compare on the other side of the Channel. After the initial shock of discovering our chalet had no bed linen or towels – a mistake that was swiftly rectified by the extremely helpful Julien – we swiftly began to relax into our Al Fresco accommodation.

I suppose there is a clue in the name. The accommodation at Camping De La Vallée was certainly one to enjoy outdoors. The spacious terrace area allowed us to enjoy the views along the valley down to La Manche and up the surrounding hills. Fortunately, apart from the early sea mist the weather stayed with us, so we enjoyed the fresh air and occasional sound of birdsong, undisturbed by other campers.

Although there were many chalets on the site, generous use of hedging meant that we were afforded a good level of seclusion and given that this was the start of the off-season the camp was practically deserted.

On our first day we decided to stroll the mile or so into Houlgate. To a certain extent this is like a mini-Deauville, especially as some of the architecture reflects its nearby neighbour. Properties are popular with Parisians looking for a weekend retreat, according to our friendly waiter at the Hotel Restaurant Le Normand, where we enjoyed an excellent assiette de fruits de mer washed down with a bottle of ice cold Muscadet sur lie.

Houlgate also has a spacious stretch of sand to rival that at Deauville beach. Late on a Sunday afternoon the promenade was full of locals strutting while the more adventurous took advantage of the healthy breeze to windsurf. I stripped to my trunks and braved the October waters joining two other foolhardy bathers – perhaps they had also enjoyed some sur lie for lunch.

Despite the initial quite inevitable shock the waters were refreshing but not too cold. Fully invigorated I returned to the beach to become acquainted with Gaston a beagle who was also out for a late afternoon stroll.

The rest of the day we spent watching France scoop the Nations League in the camp’s bar although in truth we had departed well before the final whistle was blown.

La Vallée is well located, not only walkable from Houlgate but a short drive to Honfleur and Deauville in one direction and Bayeux with its famous tapestry in the opposite. It was to the former that we headed the following morning.

In Honfleur I had a quick walk around the small harbour before enjoying a far larger plateau de fruit de mer at La Bisquine, one of the many restaurants on the harbour basking in the sun.

The dock at Honfleur was built in 1681 to replace a previous anchorage. The tall houses date back to 17th century. Due to its strategic location on the estuary of the Seine Honfleur was transformed by Charles V into a military fortress. The former Gate of Caen is still here. There is also a very pleasant carousel that dates back to 1900 and took me back to my more recent childhood.

From Honfleur we drove to Trouville and Deauville. And eventually ended up in the delightful town of Beaumont-en-Auge, all of which I had visited on my previous trip to the area.

From Brittany to Normandy

The following day we left the campsite and drove into neighbouring Normandy, where we had a further three nights booked at Domaine des Ormes in Dol-de-Bretagne.

We had intended to stop at Bayeux en route to have a look at the famous tapestry that I had last seen more than 30 years ago, but the glorious weather that followed us throughout our trip persuaded us to head once more for the coast.

We ended up in the delightful Port-en-Bessin, which is still an active fishing village. So as we settled down for some mussels and another assiette de fruits de mer we were entertained by all the boats chugging along the channel to the harbour.

Domaine des Ormes is set in 400 acres of woodland next to a 16th-century château and chapel, the former summer residence of the bishops of Dol-de-Bretagne. It has a golf course, horse riding and an enormous indoor leisure complex, as well as a good restaurant – the Clubhouse, where we dined in the first night, for once avoiding the seafood.

Domaine des Ormes also has a lively bar where we enjoyed one final nightcap, while watching England struggle against Hungary, before enjoying the wonderful nightscape full of stars.

We had planned to head for St Malo the following day but the waiter at the Clubhouse had informed us of the Cancale oysters the previous evening so we decided to head in that direction instead.

Famed throughout France the oysters are sold at a small market in Port de la Houle just beneath Cancale. So, naturally we stopped for some more seafood, which really had become part of our daily routine by now.

Port de la Houle is a pleasant spot in itself with a long beach in the harbour and great views across the bay to Mont St Michel.

We decided to drive along the coast through St Malo stopping off at a little boulangerie to stock up with provisions so we could dine on the terrace at our cabin while gazing up at the starry night through red wine tinted glasses.

On the previous day while driving back from Cancale to St Malo we had noticed a small bay with an inviting restaurant. So, we decided to return here on our final full day.

Port Mer is a wonderful little spot, mainly populated by young French school children learning how to sail in their yellow raincoats, as if they were a line of ducks.

Arguably the plateau de fruit de mer we had at the beachside restaurant La Petite Plage, was the best of our trip. It impressed my mother so much that a photograph of it is now standing on her mantelpiece.

Afterwards I went for a walk along the coast to the Pointe de Grouin.

The sea was so clear that I could see the jelly fish lurking in the waters below. In the distance Mont St Michel was hovering just above the horizon across the waters. Upon my return to the beach I went for a swim in the refreshing waters before spending the rest of the afternoon relaxing on the sand. The perfect way to end our week camping in Brittany and Normandy.

Camping in Brittany and Normandy with Al Fresco Holidays

For more information or to help find the perfect park and to book, visit www.alfresco-holidays.com or call 0161 332 8900. One of the largest mobile home operators in the UK, with over 17 years’ experience as European specialists in mobile-home holidays, Al Fresco Holidays can also arrange your travel by ferry.