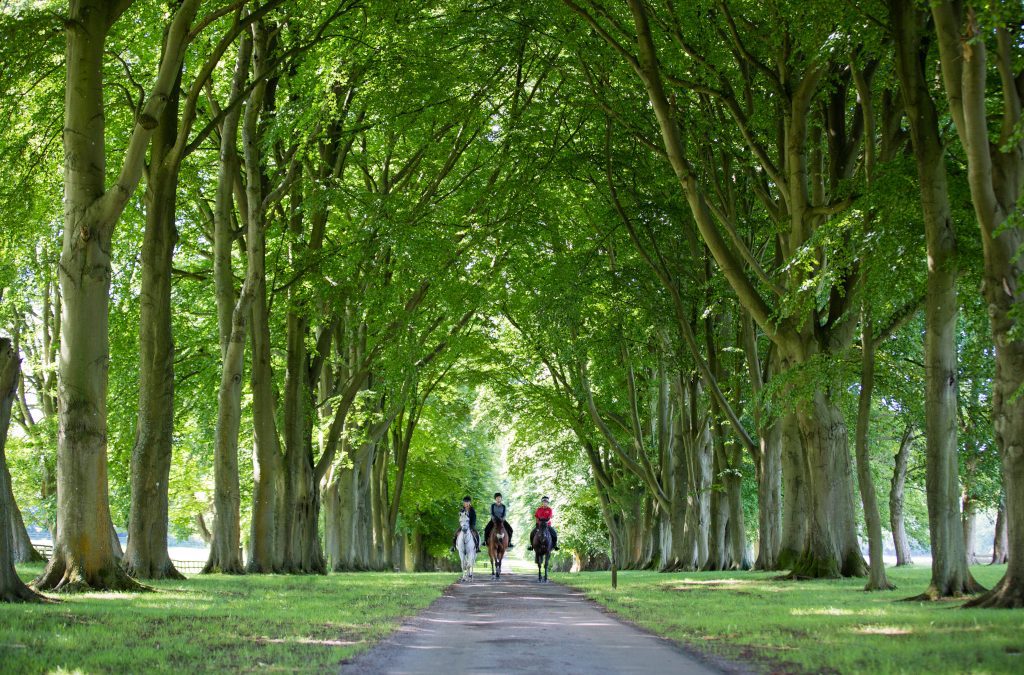 It’s halfway through our Equine Connect course at Lucknam Park Equestrian Centre and I’m reluctantly preparing to be dragged out of my comfort zone. It’s my turn to stand alone, nervously, in the ‘lunge’ ring, awaiting the arrival of a horse I have never met before.

I am certainly no horse whisperer. It’s true, we do have a very amiable pony at home, Stanley, who has tolerated me as I have helped feed and water him over the years. But that’s the extent of my lifetime relationship with horses. Now I was being asked to spend time in the ring with a stranger, with the task of bending this splendid herd animal to my will, befriending him, and all purely through the movement of my body and the gestures of my hands.

His name was Tricky, a 26-year-old black gelding with a little white flash across his forehead. ‘He’s a box of tricks’ said Lucy (one of the assistants) jokingly as he was led out, only increasing my anxiety that this might be a wild creature that would run me ragged. Eileen had already been put through her paces by Boris and Moses, a couple of very lively young stallions.

But from the moment Tricky entered the ring and started gently cantering around me on the outside I could feel my confidence grow. I guided his movements with a purposeful stride, urged on with words of encouragement from our excellent, experienced instructor Dawn Cameron.

It was really only a matter of a couple of minutes before Tricky stopped his (by now) trotting and walked slowly in compliant fashion towards me in the middle of the ring. He followed me for a few paces and when I eventually stopped and turned and faced him, he was happy for me to stroke his nose and nuzzle up to him. We were firm friends.

I’ve no doubt that Dawn and her excellent assistants Roberta (her daughter) and Lucy selected this sweet-natured animal for me as they sensed my anxiety about participating. But I was elated at my success with Tricky, delighting in my (albeit brief) relationship with him – and that’s what this course of equine therapy is really all about.

The bonding of horse and man gives simple relief to the former – they are after all flight animals, for whom every stranger is a potential predator. But for the latter there can be so much physical and psychological benefit, a sense of real achievement and the development of confidence that can assist in worrisome areas of life.

It was the Ancient Greeks who were the first to think to use horses to treat physical and mental health issues in the practice they called hippotherapy (from the Greek hippo, meaning horse). But it wasn’t until the mid 20th century that the modern world started to embrace the idea of equine therapy, particularly for those with conditions like cerebral palsy or Down’s syndrome. Children with autism also benefit immeasurably from equine therapy due to the motor, emotional and sensory sensations associated with handling and riding a horse.

We spent two-and-a-half hours on the Equine Connect course, watching and participating, learning every minute and enjoying it all the while. My second horse, a four-year-old mare called Delilah, was equally as good-tempered as Tricky. As well as the knowledge we had gained about earning a horse’s trust, we departed with a tremendous feeling of wellbeing.

Lucknam Park’s immaculately-kept Equestrian Centre is home to over thirty horses of all ages and backgrounds. Tricky is by no means the oldest – Pepper is around 40, and Smokey is a mere 31 and still ridden by children. The animals are available to beginners and advanced riders alike, to take out for a hack in the grounds or for a show-jumping lesson in the main ring.

The Equestrian Centre is just one feature of this vast 500-acre estate set in the heart of the Wiltshire countryside. There are tennis courts, a football pitch, an outdoor children’s play area and outdoor gym. A cookery school is run at various times in the year. But at the heart of it all is a magnificent five-star Palladian mansion house hotel and spa, the former with 42 individually-styled rooms and suites and a Michelin-starred restaurant.

You have a sense of the riches that await as soon as you pull in through the gates and drive along the mile-long avenue, flanked by majestic lines of huge lime and beech trees planted nearly two hundred years ago. These 400-odd trees provided excellent camouflage in the war for Hurricanes and Spitfires from neighbouring RAF Colerne. Indeed Lucknam Park not only became an informal headquarters for airmen, but also housed hundreds of evacuees from the cities.

The original house was built by the Wallis family – wealthy cloth merchants from Bristol – in the early 18th century with classic light Cotswold stone quarried from the estate. It remained a private residence until June 1988 when it first opened its doors as a luxury hotel.

For our overnight stay we were assigned The Lilac Room in the main house, one of the ‘Grand’ suites with views out over the lavender garden. It was an elegant classic room in keeping with its Georgian ancestry, bedecked in fine antiques and luxury floral fabrics. The armchairs invited – and received – a couple of hours of good reading on a wet autumn afternoon, while the superb king-sized bed would assure us later of an excellent night’s sleep.

The gardens surrounding the house are delightful – there is an arboretum further afield – Rose, Lavender, Herb and the oldest, The Walled Garden. The latter, dating back to the 1830s, features tall yew hedges and low box hedging accompanying the herbaceous borders. A number of intriguing sculptures are dotted about, and an ancient listed Dovecote, a relic from the late 18th century, straddles the entrance.

Even padding across our courtyard to the ESPA Spa beyond felt like travelling through a Japanese garden, passing interesting plants, rocks and narrow tanks filled with fish.

Once in the Spa, we were certainly tempted by the treatments, especially the Slumber Ritual and Muscle and Mind Ritual massages. But it was the huge, impressive 20-metre pool which drew our attention, enabling us to swim lengths and build up an appetite for dinner. From the big pool we could then transfer to the hydrotherapy pool, an invigorating experience if you want strong jets pummeling your back or side, or a relaxing one as the softer jet gently tickles your feet. Sitting in the warm outside pool, with the gentle rain drifting down and dusk beginning to set in, was a magical experience.

Executive Chef Hywel Jones won a Michelin star for his eponymously named restaurant in 2006 and we would certainly have dined there, but we stayed on a Tuesday night and for the time being, it is open only on Fridays and Saturdays. Instead we headed for the bright and breezy Lucknam Park Brasserie (in the same building as the Spa) where, after our excursions next door, we decided to plump for the hearty options of smoked ham hock, rump steak beef burger and an eclectic selection of local cheeses.

We were only at Lucknam Park for twenty-four hours, but Tricky, Delilah, Boris, Rum and Moses, and the magnificent house and grounds – like something out of Bridgerton (or Jane Austen for older readers) – have left indelible memories.

5 One-Of-A-Kind Ideas For Travelling On A Budget