The greater you get to know London the more you realise how much there is yet to experience in this wonderful and diverse metropolis. The capital is packed with little-known treasures, preserved historical houses, fascinating museums and galleries as well as unusual commercial and industrial buildings.

Following on from his successful Unseen London, London Uncovered and London Theatres, also published by Frances Lincoln, Discover London is a tour of London’s most intriguing locations. It allows the reader a privileged view of the city as never before with behind-the-scenes glimpses of the capital’s surprising and hidden places

Sub-divided into easily navigable geographical sections, such as Westminster and West End, West London, Looking East, etc, London Explored is a colourful guidebook that opens the doors to more than sixty locations from gin distilleries to ancient water mills, and deep-level bunkers to lavish casinos.

Weighing in at more than 200 pages, this is not a guide that you can carry around with you on a casual stroll around the city, but one that will take pride of place on your coffee table. The perfect present for that friend or relative who seems to know everything there is about London, perhaps?

Dazeley’s book manages to combine inspiration on new places to explore such as London Glassblowing in Bermondsey and The Strongroom Studios in Hackney, as well as insight into the history behind London landmarks such as the National History Museum, Admiralty Arch in Trafalgar Square and the Oxo Tower on London’s Southbank through Mark Daly’s excellent commentary. However, the highlight of this book is the dazzling photography of Peter Dazeley whose 200 images demonstrate his love for the city.

Acclaimed fine art and advertising photographer Dazeley, said of London Explored, “I’m a born and bred Londoner who thought he knew London incredibly well, yet my fourth book has been another extraordinary journey of discovery for me.”

Dazeley is a member of the Association of Photographers and a Fellow of the Royal Photographic Society, and was recognised in the Queen’s 2017 New Year’s Honours list for his services to photography and charity.

One of his favourite structures is the Crystal Palace Subway (see photo).

“The Subway supports a four-lane highway and was built to connect Crystal Palace high-level station with the celebrated Crystal Palace building,” he says. “As befits Victorian thinking, the poor left the station by the front entrance walking up the hill across the road and into the Palace via a public entrance. The rich though, with first class tickets, used the private Crystal Palace Subway under the road and walked directly, via their own private staircase, into the Palace.”

Mark Daly is a writer and publisher with a passion for little-known aspects of London. He has devised a number of London walking tours and has previously worked with Dazeley on Unseen London and London Uncovered. 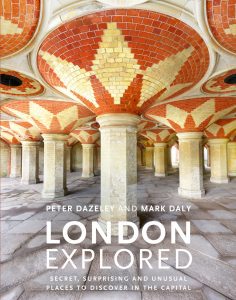 Secret, Surprising and Unusual Places to Discover in the Capital

Photography by Peter Dazeley. Words by Mark Daly. Published by Frances Lincoln, an imprint of the Quarto Group.