Mark Bibby Jackson stays at The Bristol hotel on the Harbourside, discovering the plethora of things to do in Bristol whether by day or night. 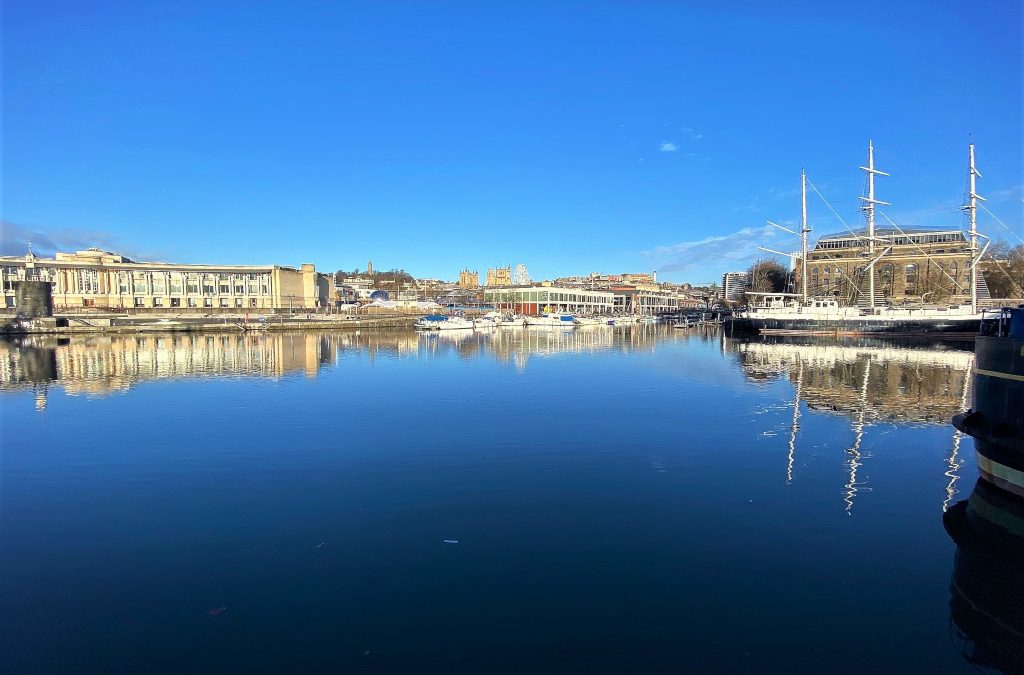 Mark Bibby Jackson stays at The Bristol hotel on the Harbourside, discovering the plethora of things to do in Bristol whether by day or night.

Somehow I have never visited Bristol. Despite one of my best friends being fulsome in its praises and my cousin Matthew having lived here for more years than either of us would care to admit, I have never visited the city on the other side of the Seven from Wales. That is until recently when I accepted the invitation to stay at The Bristol and go on a long overdue trip to the city.

The Bristol Hotel – a Great Location

The Bristol is part of the Doyle Group that includes The Marylebone in London. If you are in to 1960s architecture then the exterior will impress, as it is recognised by RIBA as a shining example of the Modern architectural movement. Inside the hotel has plenty of chic communal areas on the ground floor with contemporary furniture, including The River Grille restaurant where Matthew and I were served an excellent meal – sufficient to fuel us up for the night ahead.

The 187 rooms and suites are well-equipped with media hubs and Nespresso coffee machines stocked with Cru Kafe ethical organic coffee pods – the full-strength Peruvian blend is recommended. There is also lovely rotating chair next to a desk ideal for those who can’t leave their work at home. The bathroom, which actually has a bath, was well stocked with Temple Spa products. The Bristol also has a fitness centre.

But the main draw of The Bristol Hotel has to be its wonderful location. The River Grille opens onto the Harbourside, close to the Arnolfini contemporary arts centre, and a pedestrian bridge walk away from the Watershed cinema and Millennium Square.

However, it is the opposite direction that my cousin leads me after our dinner on his cultural and pub crawl of Bristol.

First, we crossed Queen Square, named after Queen Anne who visited the city in 1702. In the centre is a statute of William III created by John Michael Rysbrach that was erected in 1736. This was also where the first American consulate in Great Britain was established in 1792. The square suffered badly in the riots of 1831, but has now become a focal point of the city, hosting many festivals and events.

Our first watering hole was the extremely elegant Cosy Club on Corn Street. The Grade II-listed Neo-Palladian building used to be a banking hall and also a church. Its marble flooring, stunning stone work and striking domed roof make this a wonderful place to enjoy a cocktail and my Old Fashioned did not disappoint. Corn Street is just around the corner from St Nicholas Markets, which were established in 1743. A streetfood market is now housed under the Glass Arcade, while next door lies the covered market, where second-hand books and records as well as various gifts can be bought, or keys cut depending upon your preference.

Knowing my partiality for Belgian beer, Matthew then led me to the Strawberry Thief on Broad Street. On our way he pointed out one of the many Banksy murals you can find in the city. The beer menu contained a wide range of Belgian brews, but I decided to opt for the Gouden (Golden) Carolus classic I had discovered and loved on my recent visit to Mechelen where it is brewed. Although not quite matching the quality of the beer I had at the Het Anker brewery, it was still excellent. The Strawberry Thief had a relaxed and welcoming feel and cosy atmosphere that made me want to stay longer only Matthew had different ideas.

Exiting I noticed that The Strawberry Thief is next to the Palestinian museum and cultural centre and on the street as the Guildhall and the Grand. Across the street is Everards Printworks building. Built in 1900s and designed by Henry Williams it has a stunning art nouveau facade created by William Neatby, which is currently being restored.

Matthew then led me through the Castle Park, named after the Norman Bristol Castle which was demolished in 1656. Little of the castle remains, but the moat still exists and it is across this that we walk to our next destination the Left Handed Giant Brewpub. This is an independent brewery and bar with a range of craft beers served in a variety of dimensions designed to confuse old-fashioned drinkers. Seating was on wooden benches around vast wooden tables. The beer, a bitter that came in 0.4 litre size rather than a pint, was excellent and as old fashioned as the cocktail I had enjoyed at the Cosy Club.

Our night concluded at the Old Duke jazz bar on King Street, where live music is played each night. We arrived halfway through the final set, but it was great to listen to some live jazz for the first time since the advent of Covid. The perfect conclusion to a great bar and pub crawl of Bristol.

It was to the Old Duke that I returned the following morning under wonderful blue skies as I began to retrace my steps of the previous night.

Although the building where The Old Duke resides dates back to around 1775, it is by no means the oldest pub in Bristol, or indeed in King Street as across the road is the Llandoger Trow, named after a Welsh type of boat and the town where it was made. Llandoger Trow was built in 1664, and is said to be the inspiration for the Admiral Benbow Inn in Robert Louis Stevenson’s Treasure Island. This is also reputed to be where Daniel Defoe met Alexander Selkirk, the real life Robinson Crusoe.

Just across the road from both pubs is St Nicholas Church and further on is the Bristol Old Vic. Built between 1764 and 1766 it is apparently the “oldest continuously working theatre in the English speaking world”, as well as the most beautiful in the UK according to Daniel-Day Lewis. Graduates of the Old Vic Theatre School include Sir Patrick Stewart, Jeremy Irons and Olivia Colman.

My morning stroll had commenced by walking across Princes Street a couple of minutes from The Bristol, passing Lord Nelson and Balmoral ships en route. The Grade II listed swing bridge was built in 1879 and is currently being refurbished.

Princes Wharf is on the opposite side of the bridge from The Bristol. For more than 100 years cargo used to be handled here. Although closed to shipping in 1975, the wharf still celebrates the working heritage of Bristol’s docks. It also houses M Shed, a museum devoted to telling the story of the city. Free to enter and open from 10-5, although you have to book tickets in advance, it is currently showing exhibition on the wildlife photographer of the year.

Having retraced my steps of the previous night, I returned to The Bristol to check out, however before my departure I have one more part of the city to explore.

Across the pedestrian bridge in the Harbourside adjacent to The Bristol is a throbbing restaurant and arts centre based around the Millennium Square. ZaZa Bazaar has a range of world food outlets. Just beyond it is Bristol Aquarium and Sky View, as well as We The Curious, previously At-Bristol, science and arts centre, which has a 3-D Planetarium.

The area also contains the Watershed indie cinema, which is part of Europa Cinemas group, and has interesting screenings as well as hosting festivals such as the Slapstick comedy festival. Next door is The No. 1 Harbourside which has live music in Friday’s and Saturdays as well as a local sustainable menu.

My final port of call is Bristol Cathedral on College Green, which is just across the road from the Watershed. Originally a medieval abbey, it was turned into a monastery in 1542. The Chapter House is the oldest part of the Cathedral, while the nave is a Victorian addition. The tomb of the abbot John Newland who died in 1515 and has his symbol the nailheart lying at his feet, is particularly interesting.

Bristol is a fascinating, diverse and surprising city, and one to which I shall return to soon. The only thing that amazes me is why I have never visited it before.

Things to Do in Bristol Photo Gallery

Things to Do in Bristol

For ideas on fun things to do in Bristol check out the Visit Bristol website.

Rates start from £99 per room per night. The hotel is just a 10-minute walk to Bristol Temple Meads Railway Station.

Photos of The Bristol provided by The Bristol, all other photos by Mark Bibby Jackson.