7 of the Quirkiest Festivals in the UK

From Morris dancing, to bog snorkelling and horn dancing, Travel Begins at 40 rounds up seven of the quirkiest festivals in the UK for 2020. 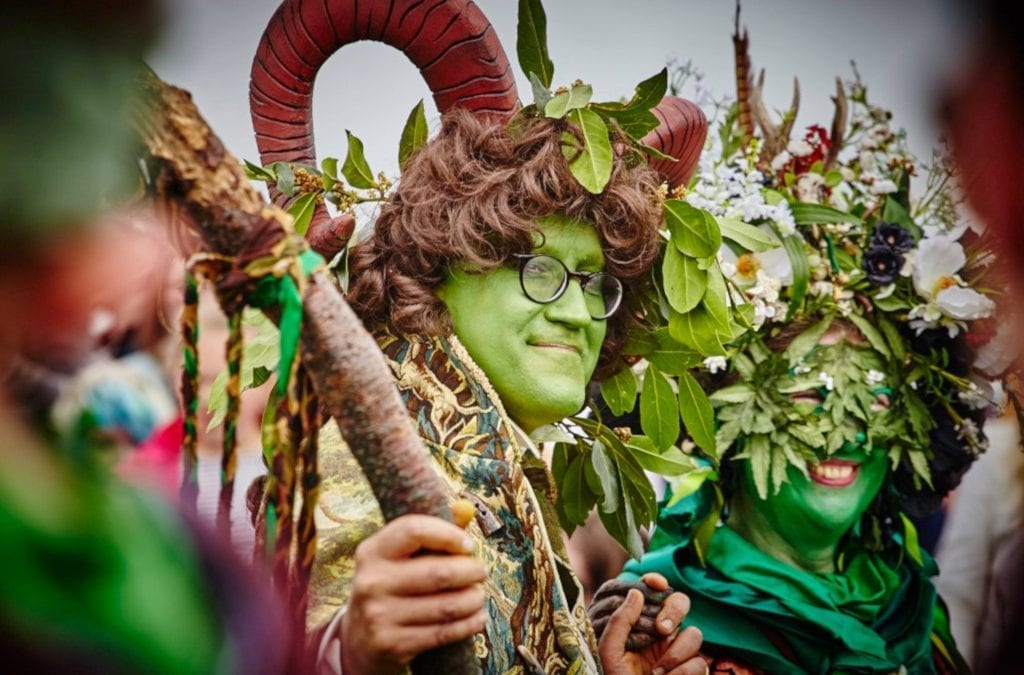 7 of the Quirkiest Festivals in the UK

We like quirky things in the UK. And what is more quirky than a festival? From Morris dancing, to bog snorkelling and even pledging you’ve never quarrelled with your spouse, Travel Begins at 40 has rounded up seven of the quirkiest festivals in the UK for 2022.

We like to be green at Travel Begins at 40, and there is nothing greener than Hastings’ traditional May Day Jack in the Green Festival. Go green for a day, bedecked in the most marvellous foliage while joining the parade or just listen to some wonderful British folk music and marvel at those jolly Morris dancers – what could be more quintessentially English. The festival concludes with the ceremonial tearing apart of Jack and the release of the spirit of Summer, making it the perfect place to start our round up of festivals in the UK this summer.

Over in Hampshire they prefer to eat their greens rather than wear them. The middle of May will see thousands of people flocking to the town of North Alresford to join in the annual Alresford Watercress Festival. Sample from many of the culinary delights on offer, watch the Watercress King and Queen being paraded through town, or see if you can shatter the watercress eating world record – 32 seconds for eating 85 g of your favourite superfood. Surely this is the healthiest of food festivals in the UK? Alternatively, take a ride on the Watercress Line which used to convey the cress to London’s Covent Garden back in Victorian times. This is a UK spring festival steeped in tradition.

If you like to combine your food with sport then maybe cheese rolling is right down your hill. Each year cheese-lovers from around the world congregate just outside the village of Brockworth, Gloucestershire for the Cooper’s Hill Cheese Rolling. A 3 to 4 kg round of Double Gloucester cheese is rolled down the hill pursued by the foolhardy competitors. Each year several people are injured in their frantic – and futile – attempt to catch the cheese, but you can join the many spectators to watch he series of races that occur during the day. The festival is thought to have started to preserve grazing rights, but it sounds more like a daft idea someone had down the pub one night. Fortunately, there are a couple of handy local pubs where you can congratulate the visitors and the foolhardy.

Most of our festivals in the UK, have a pagan route. And there is nothing more pagan than celebrating the Stonehenge Summer Solstice. Traditionally this is the time that druids used to come and worship their gods on the longest day of the year. Now, people congregate at the UK’s most famous bunch of rocks to see in the dawn. English Heritage provides free access to Stonehenge monument field for the occasion. Afghan coats are not required attire – but you must say “awesome”, “mind-blowing” and “spiritual experience” at least three times otherwise you will turn into a frog. Alternatively, you can join the Stonehenge Solstice Festival just outside Salisbury. This might not be the largest summer music festival in the UK but it’s a great way to celebrate the British Summer.

This year the Dunmow Flitch trials will once more be held in a town in Essex. Performed every four years (when not delayed by Covid), the trials are open to any married couple that has not wished themselves unwed in the past year and a day. Surprisingly, they are multiple claimants on each occasion, some are even successful. Contestants compete against the pig, with those able to convince the jury of their marital bliss walking away with a flitch of bacon – or half a pig – to quarrel over how to cook it. The trials date back to the times of Chaucer and Piers Plowman.

So far our round up of quirky festivals in the UK has had a decidedly southern English bias. For our penultimate UK festival we head to Wales – not to the valleys but to the peat bogs. Over the August bank holiday, the town of Llanwrtyd Wells sees the World Bog Series of events that includes the World Bog Snorkelling Championship and the World Bog Snorkelling Triathlon. If your idea of having fun at the weekend involves ploughing your way through a 55-metre trench cut through a peat bog and filled with water – twice – then this is the place for you. It certainly is cheaper than spending three days in the mud at Glastonbury. Other events include belly flopping, wife carrying and husband dragging, although reports that failed claimants at the Dunmow Flitch Trials end up here is unfounded.

We conclude our whistle-stop tour of festivals in the UK – I know it’s been far too brief – with one of the oldest and weirdest ceremonies in the country. Since 1226 – around lunch time – the merry folk of Staffs have pranced around the village of Abbey Bromley dressed up as several deer, a fool, a bowman, a hobby horse and Maid Marion to the tune of a melodeon for the Abbots Bromley Horn Dance. If you think this is weird then where have you been for the rest of the article. First performed at the Barthelmy Fair, almost seven hundred years ago, it’s thought that the ritual was originally designed to ensure a good season’s stag hunting, but now it appears to be a good excuse for a slightly eccentric knees up.