After visiting the country’s capital Bogota and the coffee region, Mark Bibby Jackson travels to the coast to dip his toes like a local in Cartagena Colombia. 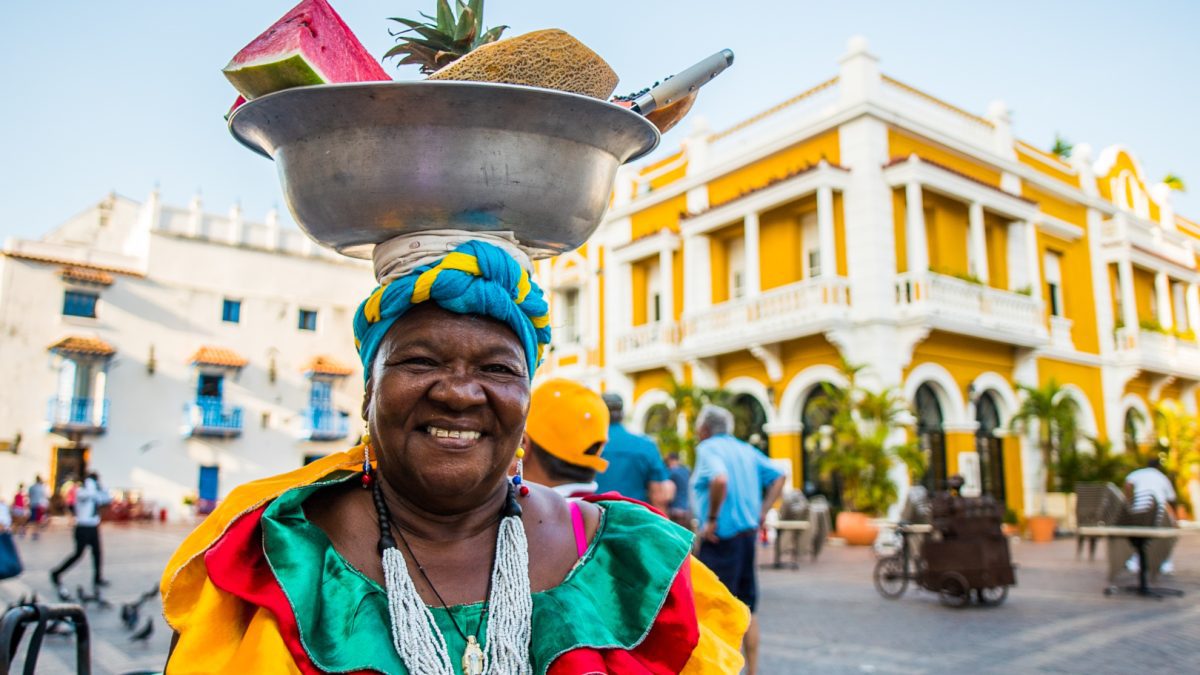 After visiting the country’s capital Bogota and the coffee region, Mark Bibby Jackson travels to the coast to dip his toes like a local in Cartagena Colombia.

It is a long time since I was last on the back of a horse – more than 20 years. Then it was in Ecuador and the terrain was rugged. This time my horse Paloma simply has to stroll along the soft sands on Manzanillo del Mar, just outside of Cartagena de Indias Colombia. Accompanied by a French journalist who has only ridden a horse once before, I feel like a veteran. After all like riding a bike – a skill I have never mastered – you never forget, right?

Cartagena Food Tour in the Footsteps of Márquez

The horse ride is on the second day of our visit to Cartagena de Indias. The previous afternoon we had embarked on a local Cartagena food tour led by our foody guide Andrea. The tour has a twist as it is inspired by one of Cartagena’s most famous sons, the 1992 Nobel Prize in Literature winner, Gabriel García Márquez, author of 100 Years of Solitude and Love in the Time of Cholera.

Andrea is certainly dressed up for the part, wearing an outfit that resembles Fermina Daza, the heroine of the Love in the Time of Cholera. The food of Cartagena reflects its history. Founded in 1533 by the Spanish soldier Pedro de Heredia on the site of a village settled by the local indigenous Kalamarí people, by the 17th century the city had become an important centre for the slave trade with. Slaves were initially brought to Cartagena from Africa as macheteros to clear away the forest land.

It is this mix of indigenous, Spanish and African, Andrea informs us, that you can detect in both Cartagenero food and music.

Our Cartagena walking tour starts at the Cande, one of the most elegant of the many restaurants in Cartagena, where we have a wonderful jugo de corozo, possibly the best juice I have ever tasted, which we had with some arepas stuffed with egg. We are just around the corner from La Serenzuela, the old bull ring that has been converted into a modern shopping mall. Here we try some coffee and patacones, a type of deep-fried green plantain served with salty cheese.

By now, I am yearning to enter the beautiful walled city that I can remember from my previous visit to this country, more than two decades ago. The historic centre is remarkably well preserved. One of the most beautiful cities in the Americas, it was declared a World Heritage Site by Unesco in 1984. Unsurprisingly it is also one of the most heavily frequented tourist destinations in Colombia.

Andrea leads us through narrow cobbled streets passing brightly coloured houses with wonderful carved doors, sampling some chips at Márquez’s favourite fritterie in Plaza San Diego before viewing his house from the outside. Occasionally we stop for Andrea to provide us with an anecdote about Colombia’s favourite author, or to play a pre-recorded extract from one of his novels.

Our tour concludes as the sun begins to set and the streets of the walled city start to fill. Not one for crowds, I exit the walled city walls for a quiet couple of beers while watching the street unfold in a nameless local bar – the essence of the nothingness of travel.

Then we have dinner at Cocina de Pepina, a lovely local restaurant, where I had an excellent fish stew.

Elegant during the day the city really explodes into life at night especially in the Getsemaní region, which has a real vibe. Once a district characterised by crime, Getsemani, just south of the ancient walled fortress, has become “Cartagena’s hippest neighbourhood and one of Latin America’s newest hotspots”, with plazas that were once the scene of drug dealing being reclaimed, and old buildings turned into boutique hotels. The omnipresent graffiti art reminds me of the capital Bogota

The following day is our last in Colombia, but the first on the beach. Cartagena de Indias is a small archipelago with a series of islands and more than 20 beaches. Bocagrande or ‘big mouth’, where our Hotel Estelar is situated, has a series of beaches made from volcanic sand. However, the best beaches in the area are found on the islands of Rosario, Barú and San Bernardo.

But we have decided to opt for a genuinely local Cartagenian experience. Our guide, Paulina, takes us to a local beach – Manzanillo del Mar, where led by my guide Gabriel, I reacquaint myself with the equestrian art. It seems that I have lost none of the little skill that I once possessed. Though the beach is no Grand National. Eventually, Paloma returns me safely to the starting point where I take my frst and final dip in the warm waters of the Caribbean.

My travels through Colombia almost complete all that was left was to take a ride on a canoe through the mangroves at la ciénaga de la virgen (virgin swamp). Although not as spectacular as the recent mangrove boat trips I had experienced in the Yucatan Mexico and Cambodia, the trip was very pleasing and not without incident, especially when my French colleague through herself at me while trying to avoid an ‘enormous’ spider. We ended our trip with a delightful fish and coconut rice with plantain lunch. The final local touch to a most authentic Cartagena Colombia tour.

The weather in Cartagena de Indias is humid and dry tropical with a high relative humidity of 84%. The temperature is warm almost all year round and generally ranges between 23ºC and 30ºC.

We stayed at Estelar Cartagena de Indias Hotel in Bocagrande, which had excellent rooms overlooking the Caribbean.

Rafael Núñez International Airport Cartagena has direct flights with KLM, American Airlines, JetBlue, Delta and Copa. I flew back with KLM to Amsterdam, before my ongoing flight to Heathrow. Mark offset his flight through Trees4Travel.

He parked his car at the airport with MBW Parking at Terminal 5 through Holiday Extras, the market leader in UK airport parking, hotels, lounges and transfers. Last year customers who pre-booked their parking with Holiday Extras saved an average of £100 each trip. MBW Parking ensures you can enjoy more holiday without the hassle, always flexible and easy to amend, with Flextras, if you need to cancel you can – without charge. To book the MBW Parking at London Heathrow Terminal 5 for £136.90 for seven days’ parking, visit HolidayExtras.com or call 0800 316 5678. Price searched on for arrival on 26 April 2022.

Cartagena de Indias has many festivals including the International Music Festival, Hay Festival, and The International Film Festival. You can also take the bus to the nearby city of Barranquilla for its amazing carnival in March.

Things to Do in Cartagena Colombia

For more ideas on what to do in Cartagena, click here. Main image from ProColombia.