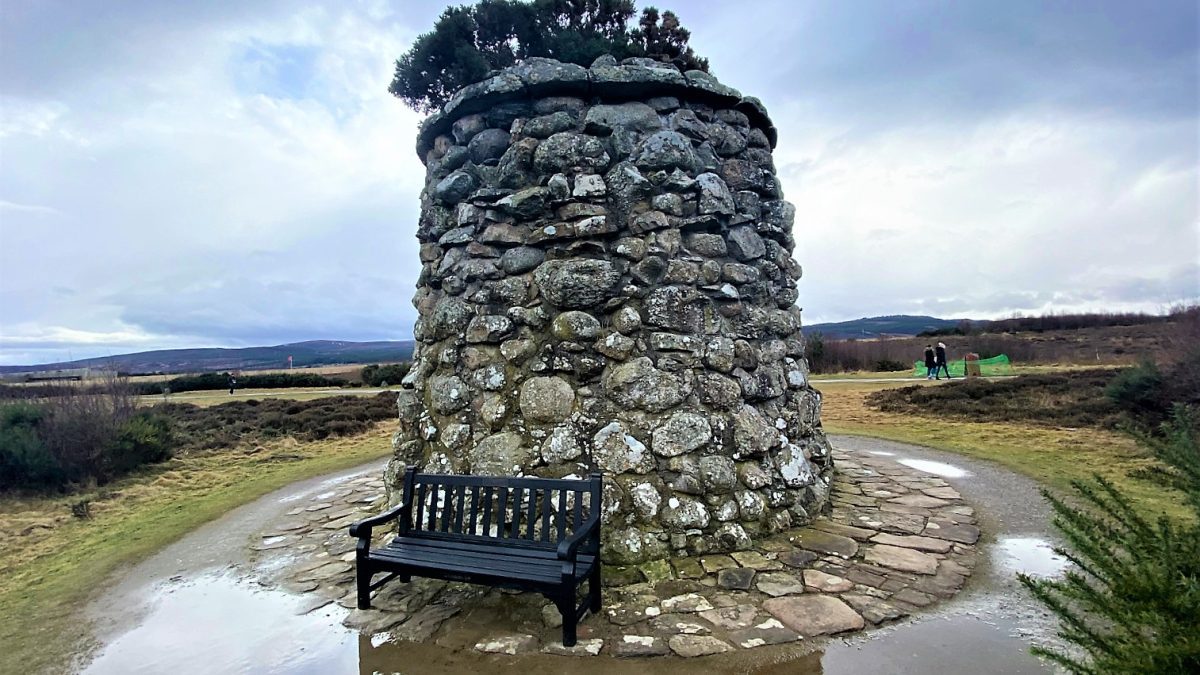 After completing his UK road trip from Oxford to Edinburgh, Mark Bibby Jackson continues north to Inverness Scotland in search not of a mythical monster but a very real approach to sustainable tourism.

It was while researching an article on Nessie for SUNx Malta’s eXist newsletter that I became introduced to Bryony Beck, one of the two destination development managers for Visit Inverness Loch Ness. Bryony had explained her ambition to make the Scottish city a sustainable tourism destination, and invited me to see their work in practice.

A botanical garden might seem to be a strange place for a Damascene conversion, but until our meeting, I confess to having more than a few misgivings that the current ‘regenerative tourism’ trend was anything other than a reboot of the old sustainable model – Sustainable Tourism 2.0. Not that I would imagine Ewan Mackintosh, the manager of the Inverness Botanic Gardens, would claim the project he oversees is a shining example of regenerative tourism. Both he and it are far too grounded in the community for that.

At first I have some misgivings, as I am shown the tropical gardens. Having spent many a year living in the Tropics, and having visited the Eden centre on a recent trip to Cornwall, I am slightly underwhelmed. Although this is the only place you can encounter the tropics in the Highlands.

Not for the first time I realise that first impressions can be misleading.

My conversion commences when Ewan introduces me to one of the many – approximately 30 – volunteers who flit around the gardens like butterflies, while mentioning that the key part of the gardens is education. This he does while casually mentioning that the bio mass boiler, fuelled by waste wood pellets, provides the energy for the gardens. I start to realise that the impact of the centre lies far beyond the plants on display.

Ewan then shows me the cactus house where I immediately feel more relaxed removed from the humidity of the previous chamber. Outside is a pottage garden with edible vegetables some of which are used in the Botanic Garden’s café, and next to that a Simba Garden with a Tree of Tranquillity designed for people who have lost a child in childbirth or infancy.

However, it is the GROW Garden that convinces me. The project has been designed to allow the team of volunteer gardeners who all are adults with learning difficulties, such as autism or Down’s syndrome, to get as much from volunteering here as possible. Some of them have been coming back for more than 20 years, far before regenerative was a term associated with tourism. Here they are taught about recycling and wildlife as well as composting and harvesting.

Like Dr Who’s Tardis, the well-marked gardens, that cover a couple of hectares within the walled garden of a former Georgian Mansion, expand beyond their formal setting. I am led to a series of greenhouses where vegetables and plants are grow. Gavin, who oversees GROW with his colleague Rhona, talks me through the project, explaining how any excess food produced is sent to food banks. Nothing goes to waste at the Inverness Botanic Gardens.

The raised beds in which the plants are grown consist of Quick blocks made from marine waste, such as plastic bottles and nets. The gardens also accepts and reuses agricultural waste from local businesses, something which prevents them from claiming organic status, as the waste might not be organic. Even the plant pots are recycled.

As the gardens charge no entrance fees they are largely dependent upon donations, such as the Margaret Douglas Trust, The Inverness Common Good Fund through the council, and HSBC Bank. They also receive £60,000 per year from the NHS to fund the GROW project.

Part of the Community

Walking around I get a refreshing sense of togetherness here, something that has been largely eroded south of the border over the decades by successive UK governments. Ewan introduces everyone by name. There is a great sense that the gardens play an important role within the local community.

There is also a tangible end product. The nurseries produce plants for Inverness council that will provide some colour to the streets and public spaces of the city. Ewan also has plans to develop an orchard, they already run a juicing workshop.

This is the sort of enterprise that should be at the heart of sustainable tourism. At first it seems pretty nondescript but upon deeper investigation you realise how wonderful it is. This is true regenerative tourism.

“There is a real sense of community here,” Bryony says as we depart. 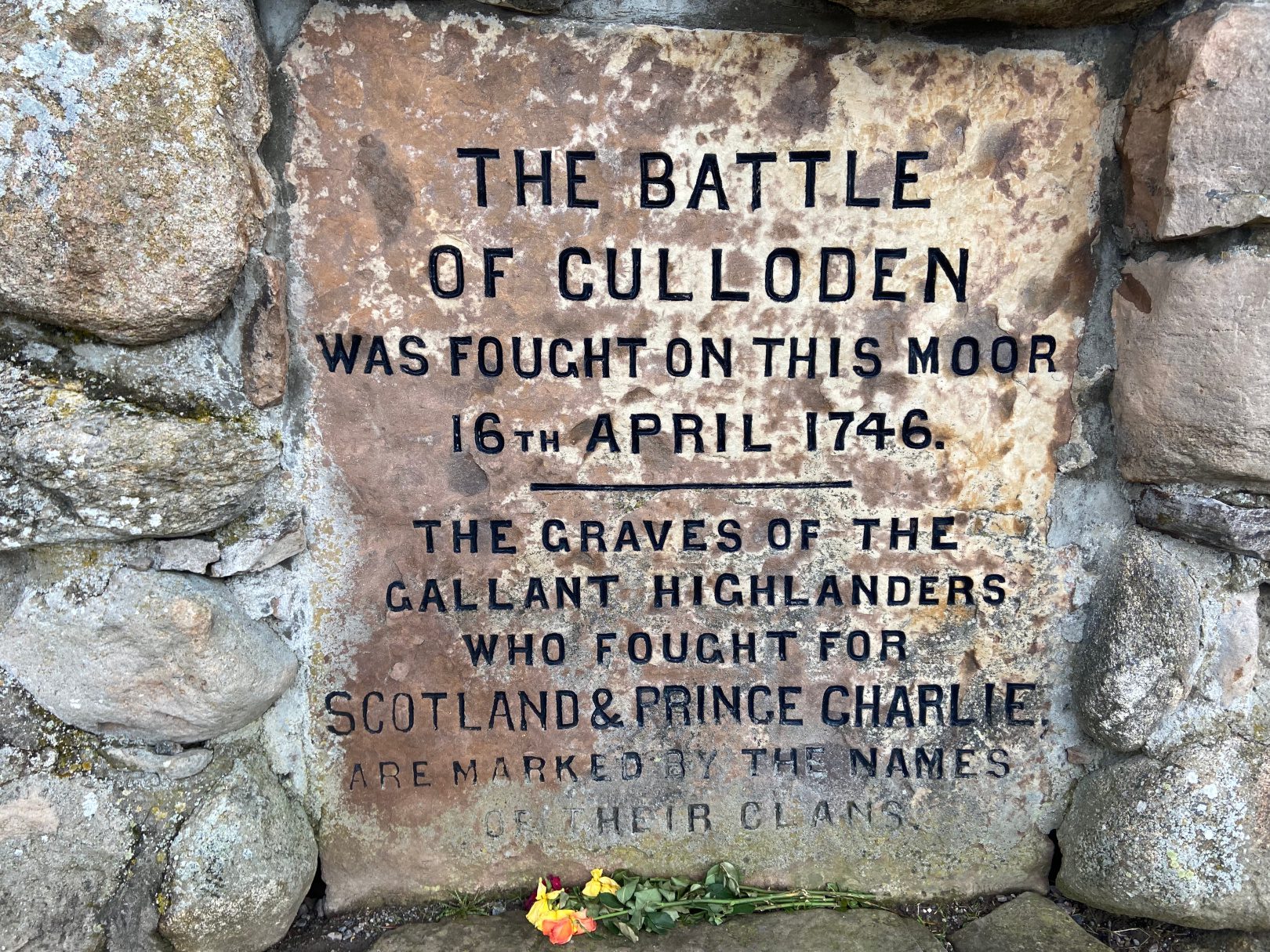 While the Inverness Botanic Gardens indicates the future direction for tourism, much of the current emphasis lies rooted in its past.

Just outside of Inverness, the Culloden Battlefield is of interest to war historians, for this is where the second Jacobite Rebellion ended on 16 April 1746. Free to roam around the field, although there is a charge for the visitors’ centre, flags and information stones indicate points of interest. The government front line is marked by red flags while that of the Jacobites is marked by blue.

A cairn or tower (main image) was erected in 1881 by Duncan Forbes of Culloden, who also placed the headstones on the graves of the clans. It stands as a memorial for those “gallant highlanders who fought for Scotland and Prince Charles”.

I found the battlefield really interesting, however seeing the gravestones for the clans lost was a chilling reminder of the consequences of war made more poignant as at the time Russia had just invaded Ukraine.

The drive from Culloden Battlefield to Urquhart Castle takes the best part of an hour, but once you have circumnavigated the city of Inverness, you enter the most beautiful scenery with Loch Ness on your left.

My journey is interrupted by a few stops to look at the loch, on the off chance that Nessie might put in an appearance. One blot on the waters promises briefly until I learn it was a couple of canoeists enjoying the early Spring sun.

Urquhart Castle was the largest medieval castle in the Highlands. A short introductory video explains the 1,000 years of history of the region, starting with the arrival of St Columba from Ireland.

The castle dates back to the thirteenth century, and was blown up in 1692, shortly after a failed Jacobite siege, so that it could not fall into rebel hands.

The view of the loch is spectacular, and the ruins make for a pleasant visit. As one of my fellow visitors stated upon leaving, “It would have been bonny at one time.”

Having been cooped up for many a day during my UK road trip, I am yearning to get some exercise. The walks around Inverness are spectacular, and Bryony had suggested I go on the Glen Affric Walk, along part of the Africa-Kintail Way.

Leaving my car at Dog Falls car park, I set off on the Viewpoint Trail, which is indicated as “strenuous” on the notice board. The well-marked trail follows clear wide paths to a viewing point about twenty minutes away. Strenuous is an exaggeration.

The view down to Loch Beinn a’ Mheadhain is bewitching, especially with the snow-capped peaks of various mountains including Sgùrr na Lapaich (1,036 metres) in the distance. Birdsong competes with the distant rumble of cascading water for my attention as I stop for a sandwich at the most wondrous picnic spot.

Descending I follow the trail back to a fork where Dog Falls Trail continues straight ahead. This allows me to take a narrow path through the forest land and loop back to the car park. The forest reminds me a bit of Yosemite, although the trees were nowhere near as tall. Eventually I reach a narrow wooden bridge which traverses the pitch black Dog Falls, and signifies that I am close to my journey’s end.

The trees I pass are a mix of Scots pine and birch. The colours are an amazing range of greens yellows oranges and reds. It is really peaceful here with little trace of man – just nature.

Forestry and Land Scotland which manages Glen Affric National Nature Reserve has a policy of removing non-native trees which were planted in the 40s and 50s and letting the ancient woodland “renew itself naturally”.

Perhaps this should be the motto for Inverness tourism and for tourism in general. Natural renewal – isn’t that what we all need after the past couple of years. Not just for us but for the planet as well.

There are many options to choose for Inverness accommodation, I stayed at Glen Mhor Hotel and Apartments, which has excellent views across the River Ness as well as a wonderful restaurant.

What to Visit in Inverness Scotland?

For more ideas on places to visit near Inverness and things to do in Inverness, head to the Visit Inverness Loch Ness website.

How to Learn to Sail around the World in a Week