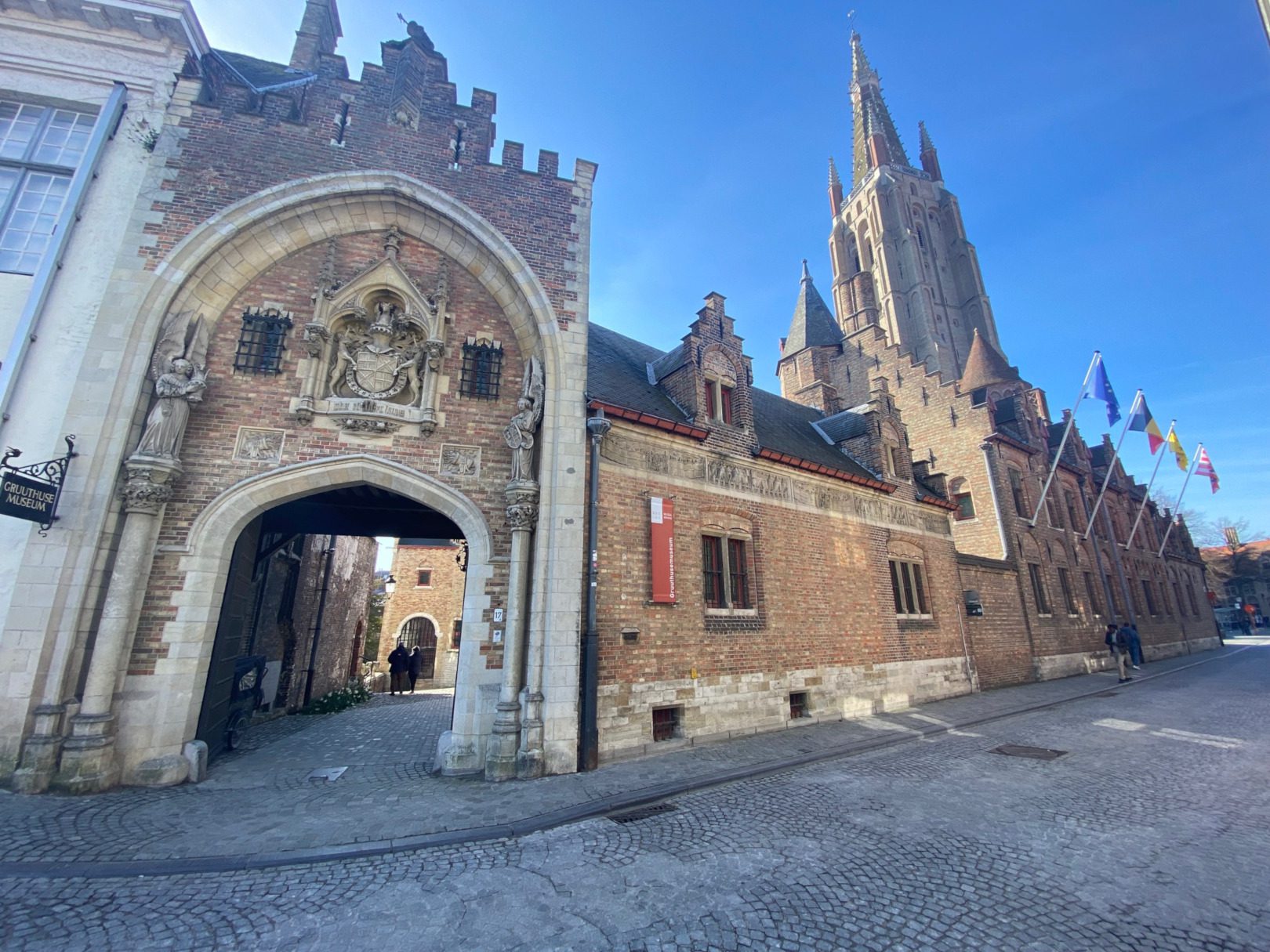 The main reason for my trip to Bruges, Belgium was to visit the annual beer festival. With so many beer festivals in Belgium it is hard to work out which one to visit. A question I put to Bart Vanneste, who is a board member for the Bruges Beer Festival.

For Bart the key advantage of their beer festival over others such as the Zythos Beer Festival lies in its location.

“It is in the historical centre of a city so it is easy to access for tourists,” he explains. “You can walk here from your Bruges hotel. A lot of people come here because they can combine tourism and a Belgium beer festival.”

Like Zythos, which Bart explains is the mother festival of Bruges, the idea of the Bruges Beer Festival is to showcase all Belgium beer.

With 550 beers to choose from, the festival – now in its 14th year – certainly offers a wide variety of Belgium beer styles. For, with the exception of one brewery from neighbouring Netherlands, all the beer is brewed in Belgium.

It was Bart’s labour of love to choose the 64 breweries to take part in this year’s festival. Describing himself as a “Zythologist” or Belgium beer sommelier, he admits that it really is a “hobby that has got out of hand.” He is also keen to emphasise the vital role that the 160 volunteers play to make the festival happen. “Without the volunteers we are nothing,” he says.

From Trappist Beer to Biodynamic

The festival provides an excellent tour of the beer of Belgium from Trappist beer to Belgium craft beer, but only one brewery, as far as I can see, that focuses on organic beer.

Sonia and Paul Warmenbol are partners at Warmenbol Brewery. “Why not organic? In the 80s I was an organic architect,” Paul explains as if the transition from this to brewing was the most natural thing. Since 2014 he has been brewing organic beer, calling himself a beer architect.

The couple are the only brewers at the festival who are making biodynamic beer adhering to the principles of principles of Rudolf Steiner, who proposed a more holistic view of nature and farming. The rules for production are more stringent than for organic beers, Paul explains.

I try the biodynamic beer, called Saison – 3. It had a freshness and cleanliness that you do not often find in beer, certainly outside of Germany.

During the festival there are occasional shouts from the assembled revellers that echoes around the hall much like a Mexican wave. As the afternoon wears on the noise seems to intensify.

Generally, I focus on the Trappist beers I know I love, including a couple of special bruins from Westvleteren that Bart recommended during our chat. Also, once more following Bart’s suggestion I try an Oude Geuze Boon, which I found a bit too sour for my taste.

After sampling so many beers during the afternoon, I felt in the need for some sustenance. Fortunately Bistro Den Amand, just off the Old Market in the centre of the historic part of town, proved ideal.

This is a lovely little restaurant with only six tables that offers great French-Belgian cuisine. The white asparagus served with smoked salmon was a real eye opener. Previously I had always preferred its green cousin, but I might need to revise my opinion. It was wonderful accompanied with a refreshing Romanian white, a mix of chardonnay and riesling grapes though lacking the sweetness you might expect from the latter variety.

I awoke the following day feeling as though I was in a scene from In Bruges – a film I adore – my room in the beautiful Hotel de Goezeput looked out across the 10th century Saint Salvator’s cathedral, the oldest church in Bruges. The view was spectacular, and somehow I avoided hitting my head on the exposed beams.

I planned to make a whistle-stop city tour of Bruges in a day. My first visit was to the 83-metre high Belfry that dominates the Old Market Square. The tower was built between 1482 and 1486, although the Great Bell is a more recent addition. Dating back to 1800, it was cast in Antwerp in 1680.

It takes 366 steps for you to walk the top of the tower, something that only the fit or foolhardy should attempt – I think I fell into the latter category. However the views down to the square and across the city are well worth the exertion.

On the way to my next destination the Groeninge Museum I pass a lovely flea market on the banks of De Dijver, which apparently means Holy Water in Celtic. The market dates back to the 19th century, and is held on Saturdays and Sundays.

The museum itself is renowned for its history of Belgian visual art including works by Jan van Eyck and Hans Memling. For me, the highlight was the more abstract work by Flemish expressionists

Nearby the Groeninge Museum are the Gruuthuis Museum, which dates back to the 15th century, and the Church of Our Lady. The latter contains a statue of Madonna and Child by Michelangelo. Installed here in 1514, it was seized first by Napoleon and then Hitler. Fortunately, it was recovered from the Altaussee salt mines by The Allied Monuments Men so that American tourists could enjoy it. There is a great sense of calm inside the church juxtaposed to the bustle outside on the cobbled streets where horse drawn carriages cavort with wild abandon.

The real beauty of Bruges, though, lies not within its walls but outside. A 30-minute boat trip is a great, yet highly commercialised way to experience the city. Sitting listening to our guide you realise how beautiful Bruges is, that is if you have failed to grasp this already.

It is also a good way to flag up places to visit later in the day. Our ride ends close by the hotel in which In Bruges was set.

After the boat trip I walk just a hundred metres or so – this is the beauty of Bruges, it is so small – to have a beer at Bourgogne Brewery, one of the two breweries located in the heart of Bruges.

There is a short tour of the brewery so you can see the whole brewing process before enjoying their brown beer beside the canal.

The other brewery open to the public is De Halve Maan (Moon), which is family-run and has been in Bruges since 1856. They have a forty-minute tour which I confess I skipped but I did enjoy their excellent brown beer, Brugse Zot Dubbel, which was slightly less sweet to my taste than the Bourgogne.

The brewery has an excellent brasserie which seems really popular and provides the perfect place to rest and have Bruges beer before resuming my city tour.

If you wish to discover more about beguinages, read Mark’s initial encounter with them in Kortrijk.

Nearby is the Ten Wijngaerde beguinage, which was added to the Unesco world heritage list in 1998, along with Kortrijk, Mechelen and Leuven. On this wonderful spring day, the central garden is beautiful with the daffodils in full bloom.

My only real problem with Bruges is that it was relatively crowded – it was the Easter holidays. I have a big problem with large crowds, and Bruges seemed particularly congested to me. I guess this is a good sign for the industry as a whole but it reminded me of the dangers of overtourism something I had not felt at all in Leuven, the previous couple of days. Fortunately the weather was beautiful during my 48 hours in Bruges so I could avoid the crowds outside and soak in the beauty of this most elegant of European cities, along with some excellent Belgian beers.

There are many hotels in Bruges so you are spoilt for choice. I stayed in the Hotel De Goezeput, Goezeputstraat. This Bruges hotel was full of old world charm. My room at the top of the building in the rafters afforded me a view of Saint Salvator’s cathedral.

Eurostar to Bruges via Brussels

I travelled to Bruges by train taking the Eurostar from London St Pancras to Brussels Midi. Trains from Brussels to Bruges take just under the hour. He offset his train journey with Trees4Travel.

More Things to Do in Bruges

To discover what you can do on your Bruges holidays go to the Visit Bruges website.