Mark Bibby Jackson takes an alternative view of tourism in the Austrian capital, going on a tour looking at sustainable things to do in Vienna. 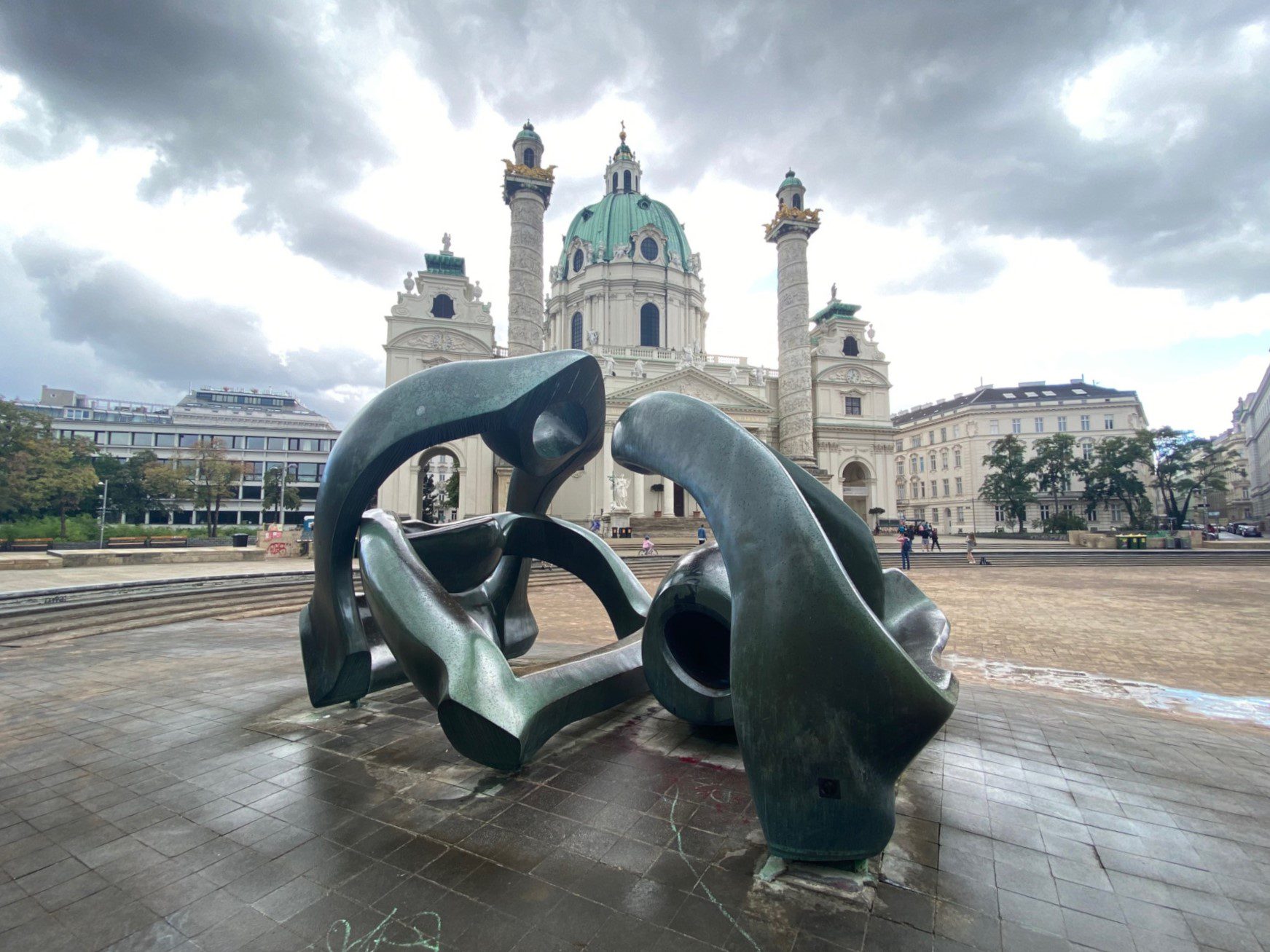 Mark Bibby Jackson takes an alternative view of tourism in the Austrian capital, going on a tour looking at sustainable things to do in Vienna.

It is towards the end of our sustainable tour of Vienna that Selin Altan Huber takes us to an urban garden centre in the Rudolfsheim Funfhaus area in 15th District, called the Gold Garden. Almost casually she drops into the conversation that she is one of the dozen or so people that have converted this plot of land beside a major thoroughfare into a urban regeneration project that in June won a Smart City Vienna award.

The centre, which opened in March 2022, is one of several wonderful regenerative tourism initiatives that Selin has shown us on her tour of sustainable Vienna as part of Austria Guides for the Future.

The building that used to stand here was demolished in March 2020. When they heard there was no budget to build a replacement building this year, Selin and her colleagues stepped in to develop the garden centre, which is basically a squat – they only pay for the water.

Selin and her seven-year-old son have a small plot of land in which they grow vegetables – pumpkin, chilli, aubergine, basil, pumpkin and courgette. Elsewhere there is a bar, and at weekends they have a flea market. In the past there has been a farmers market here, and according to Selin this winter there are plans to have a Christmas Market.

It is a fantastic example of community involvement, regenerating an area which has become run down, or in this case forgotten, and creating something living and most importantly green.

Everything is made from reused or recycled goods. Outside on the street there are öklo toilets for people to use. These have no water nor chemicals. You just add some wood chippings to your business and then let nature do its work. Apparently there are around 1,000 of these toilets around Austria, and they are used at many festivals.

Selin and her colleagues are in no doubt that they are living on borrowed time. They do not know whether they will be here next year, or whether the centre will be turned into a construction site. One thing for sure is that they will find another home for the project. The people involved used to be part of the Vienna Roof Farm, which was based on a disused hospital before it too was demolished.

The 15th District is a long way removed from the Baroque beauty of the First District of Vienna, although it is only a few stops away on the U-Bahn and tram.

Although Vienna is one of the greenest cities in the world, covering approximately half of its area, the 15th District is one of the least green in the Austrian capital. It is also one of the most densely populated areas containing 7% of the city’s 1.9 million population, while only covering some 1% of its area. Traditionally this is one of the districts where the city’s immigrant population settled. Half of the its inhabitants were not born in Vienna. As we walk through the streets we pass an Afghan Cultural Centre and a Russian supermarket, Selin herself was born in Turkey.

A great example of the district’s ambitious approach to green urban regeneration is Sponge Street, a non-descript street, where water is captured underneath like with a sponge, and used to feed the trees.

Along the street are small gardens, where locals plant herbs and flowers to encourage biodiversity in a form of city rewilding. Selin explains that originally the urban gardeners receive a grant from the authorities, but after that the cost of maintenance is the responsibility of the residents – creating a win-win situation. Sponge streets are now common across Vienna, but the one in the 15th District was the original one. It is part of the tree discs project.

Part of the transformation of the area was due to the arrival of IKEA, which opened a store in the district in September 2021.

Understandably residents were reticent of the impact the arrival of the Swedish behemoth might have upon the area, but the change has been for the better, says Selin.

The IKEA Building is the only one in the world, according to her, with no parking spaces. Customers have to walk, bike it or take public transport. Also, IKEA planted 160 trees mainly on the roof with its spectacular views of the city, which has made a substantial benefit to the local environment. Selin says that the trees can actually reduce the temperature of the area in the summer. Some of the trees have even been adopted by local primary street kids.

Around the centre, on local streets, parking has been converted into green spaces, as the whole area is being greened, in a great example of urban regeneration. Selin attributes part of the success of such initiatives to the encouragement of the Austrian President, Alexander Van der Bellen, who was the leader of the Green Party.

The area also has one of the greenest hotels in the world. The Stadhalle Boutique Hotel has been zero energy since 2009. The hotel is the first urban hotel to have a zero energy balance. This it achieves by a combination of photovoltaics and solar energy.

Selin showed us around the beautiful internal green courtyard, with its living walls, although we were unable to view the lavender roof garden which is apparently very popular with the local bee population.

The hotel also collects rain water and utilises an underground spring, as well as minimising the use of high energy appliances, such as fridges, as well as using LED lights.

Although the main focus of our tour was the 15th District, we started and finished in the First District. Here Selin showed us some incredible street art.

The tour started at the Gate of Violence, a striking series of four sculptures by Alfred Hrdlicka built on a site of a building that was destroyed during a bombing raid in the Second World War in which 180 people died in a cellar when the building above collapsed. The second sculpture represented the enforced cleaning of streets by Jews during the Nazi occupation of the country leading up to and during the Second World War. It is opposite the Albertina Museum.

Coincidentally the building destroyed in the raid, was designed by the same architect, who built the Turner Temple in the 15th District, one of the many synagogues destroyed by the Nazis on 10th November 1938, Night of the Pogrom or Kristallnacht.

After The Gate to Hell, Selin showed us a sculpture by Henry Moore outside the Charles Church in Karlsplatz built by Charles V, father of Maria Theresa, in the first half of 18th century. Moore’s Hill Arches was a gift to the city in 1978.

Graffiti along the Danube Canal

Our tour finished beside the Danube Canal, where street art is permitted as part of the Wienerwand project, in which certain areas have been allocated for legal graffiti. Although not as dramatic and pervasive as the Bogota graffiti, I saw earlier in the year in Colombia, it showed another way that with foresight local authorities can enliven a potential rather drab area.

Our tour lasted four hours, but if you do not have this much time to spare I suggest you focus on the 15th District, which is really a very cool area, and provides a visionary approach to regenerative tourism in Vienna.

Sustainable Things To Do in Vienna Photo Gallery

Austria Guides for the Future

Is an association of six state-certified Austria Guides, founded in May 2020. Its goal is to contribute to environmental and climate protection through its activities, while being self-organised and politically independent. Instead of spreading disaster scenarios, it aims through guided tours to raise awareness on future-oriented developments in Vienna. For more information, click here.

For more information or to reserve a room at the Stadhalle Boutique Hotel, click here.

A Green Restaurant in Vienna

On the previous evening we dined at Wrenkh, a veggie-centric restaurant in Vienna Old Town. Discover more here.

More Things to Do in Vienna Austria

For more inspiration on things to do in Vienna, go to the local tourism website. All photos Mark Bibby Jackson.

Which PEMF System Is Best for Traveling?