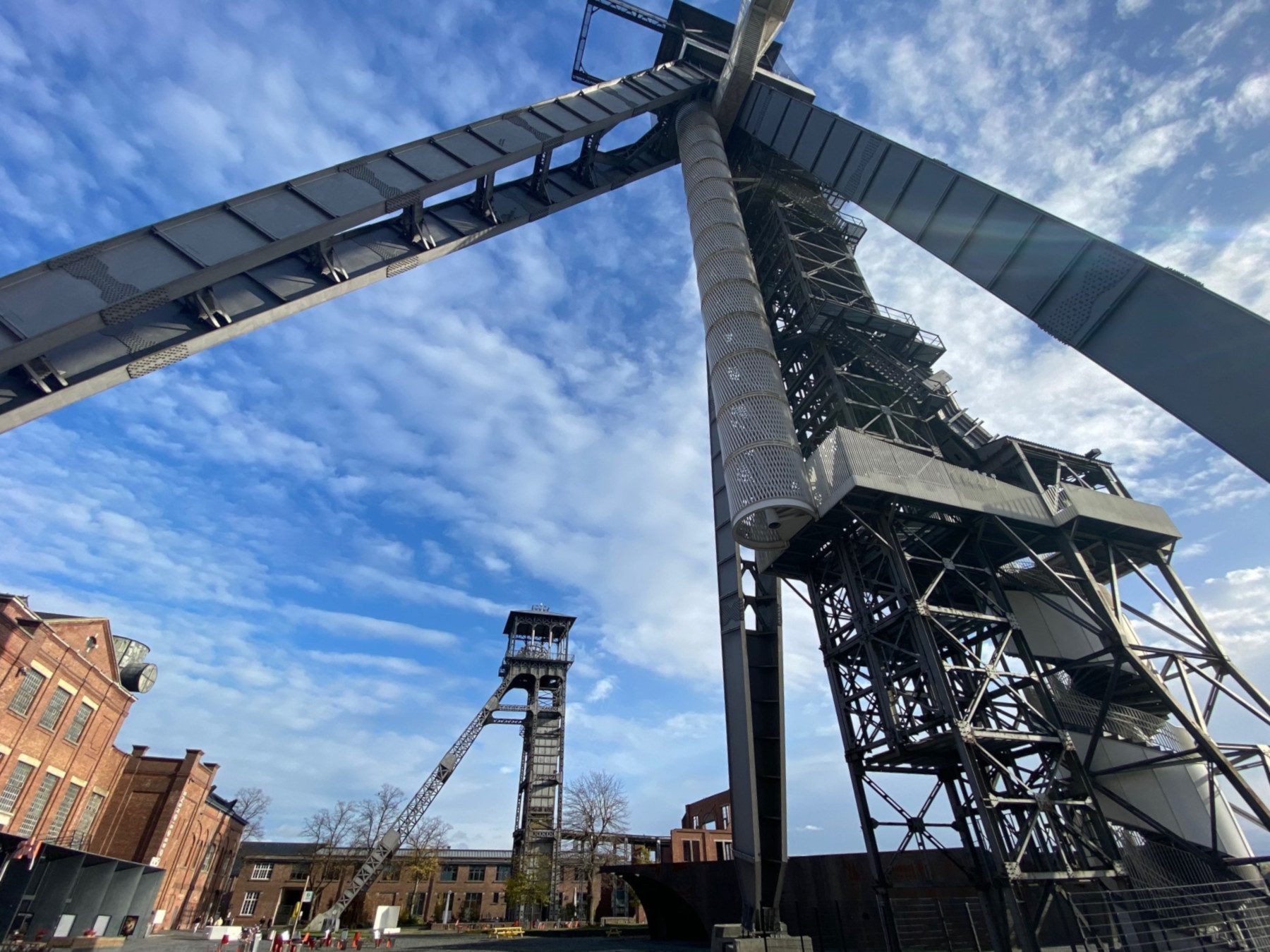 It was in Germany while visiting the Zeche Zollverein, the Metropolis of mines transformed into a museum and cultural centre, that I first realised the potential of culture and tourism to regenerate areas scarred by industry. Since then I find myself continually drawn back to post-industrial architecture. My most recent visit was to Limburg in Flanders, Belgium.

“Transforming a black lung into a green lung,” is how my guide Lieve Weetjes describes the Rivierpark Maasvallei, a vast expanse of greenery created out of former gravel quarries on the bank of the River Moselle (River Maas), that marks the border with the Netherlands.

Our walk starts at the visitor centre opened a few months both for the Rivierpark Maasvallei and the town of Stokkem, Limburg in which it is situated. I am not usually impressed by visitor centres, but this is an exception, both for its bird’s eye view of the river park and its interactive educational room, which must be great for kids.

According to Lieve, who was born a few kilometres away, gravel was extensively extracted here in the last century, particularly in the 50s. Largely disappeared, gravel mining will be totally phased out by 2030. Now the area is filled with lakes and ponds, just like the Lausitzer Seenland in Brandenburg I visited in the summer. Like there the visionary authorities realised the potential of creating something positive out of a blot on the landscape.

The result has been to transform the area into a vibrant nature reserve, with more than 200 species of birds either living here or passing through, as well as a thriving beaver population, wild cows and horses.

“It’s a very good sign nature is taking back,” says Lieve as we take the 2.5km fully accessible path around the river park. Immediately she spots some wild horses descended from Przewalski horses, and we set off for a closer look. The horses keep on munching impervious to me and my camera, much like the New Forest ponies in the UK.

According to Lieve, the locals initially opposed the idea to turn the site into a nature park but they have been converted. “They noticed how beautiful it is and are proud of it,” she says, adding that the creation of the cycle network helped convince people.

There have also been significant economic benefits from the increase in tourism drawn to this beautiful part of Belgium.

“Tourism stops pollution,” Lieve says, contradicting the mantra of many anti-tourism activists. In truth there are both good and bad sides to the industry. The Rivierpark Maasvallei most definitely lies in the former camp.

As if to prove the point a white stork flies past. Lieve says that these are new to the area; there used only to be blue storks – a promising sign of increased biodiversity.

Our walk leads us to the town of Dilsen, where I am going to enjoy my first Belgian wine tasting.

Belgian beer is renowned worldwide, but the country’s wine has yet to make its mark. Johann Jacobs is trying, in his own small way, to rectify this.

Earlier Lieve had taken me through Johann’s small vineyard to sit at the lake and drink in the tranquillity. Now, it was our time to sample the wine – something I suspect Lieve, who had taken winemaker classes with Johann, was greatly anticipating.

Johann started planting his vines on a small plot of land in 2014, calling his wine Thilesna after the old name for the town, Dilsen. This is very much a family affair run by Johann and his wife Carmen, while his father, who we bumped into over lunch, helps out in the field.

Come harvest time, Johann phones up all his friends to help with the grape picking, presumably well rewarded with the fruits of their labour. The wine is then distilled and bottled in the small warehouse on their property before being shipped around the country and across the border to the Netherlands.

Johann runs tours of the vineyard and the winery, which are particularly popular in the summer, ending with a wine tasting in their showroom. Having already viewed the vines, it was now time to taste the wines.

We commence with a Pinot Auxerrois wine which Johan describes as “nice on a sunny afternoon.” Certainly this fruity wine goes down easily although I prefer the second which is a Pinot Gris. It has a bit more body, and is sharper with more minerality. Lieve’s favourite is the 2018 Riesling, which she already knows well.

Johann’s dream is to be able to work full-time at the winery. He currently still has a job selling agricultural products, but judging on the quality of this tasting he could well be giving up his day job sometime soon.

The following day I am picked up by Robert Vercruysse from my hotel and taken to the Hoge Kempen National Park, where Robert is a ranger.

Opened in 2006 Hoge Kempen was the first and still only national park in Belgium. It covers some 67 sqkm and is part of Natura 2000. According to Robert the area used to be covered with dust from the three coal mines that operated in the area. The first of these, Winterslag was opened in 1917 and closed in 1988. The authorities decided to hand the area back to nature re-creating heathland and planting largely pine forests. Now Hoge Kempen has a 200-km network of hiking trails with 40 looped walks as well as cycle paths, which attracts visitors and locals alike, as well as the local Genk football players on their training runs.

Our walk starts from Thor Park, an innovation park built on the site of the former Waterschei mine. THOR was the name of the mine’s football team. The park has an innovation complex where, Robert explains, they are working in association with the University of Leuven and Hasselt, on renewable energy projects – another form of climate payback.

Walking around Hoge Kempen with the sun shimmering through the trees, it is hard to imagine that this area used to be an industrial cauldron. The hills were created out of land spill from the mines, the pine trees planted by the mine owners to create timber used to construct the tunnels. At one point Robert stops to pick up a lump of coal just lying on the surface.

He then leads me to the top of one of the hills from where we can see across to the Netherlands. In the distance smoke billows from industrial chimneys, as a remembrance of what once was.

After our walk Robert takes me to the Waterschei Garden City built in the early twentieth century as part of the movement started by Ebenezor Howard in 1902. The aim, as I had discovered when visiting Marga Garden City in the town of Senftenberg, Brandenburg was to create a utopian mix of town and country for the mine workers. It represented a recognition of social responsibility in harmony with nature, out of which Rivierpark Maasvallei and Hoge Kempen are distantly descended.

My final stop is at C-mine, a cultural centre created on the site of the old Winterslag mine, which had started this cycle of human exploitation and regeneration of nature just over a century ago.

The arts complex houses Luca School of Arts, as well as regular exhibitions and the mile long C-mine Expedition which takes you down into the old mine tunnels.

Standing proud are the twin mine shafts, one of which you can climb 350 steps to gain a panoramic view of Genk and the surrounding area. There is also a museum and a cinema, as well as a most inviting bar area, which unfortunately I do not have time to try out as I have a train to catch back to Brussels, from where the Eurostar will return me to London St Pancras.

My short trip to Limburg has convinced me further of the positive force that tourism can provide in helping convert industrial sites into cultural and nature parks, providing much needed employment for local communities. Sometimes we can see the path to the future by looking more closely at the vestiges of the past.

Mark travelled by train from London to Genk Belgium. First taking the Eurostar from London St Pancras to Brussels Midi, and then the connecting train from Brussels to Genk, which took about an hour and a half.

Things to Do in Belgium