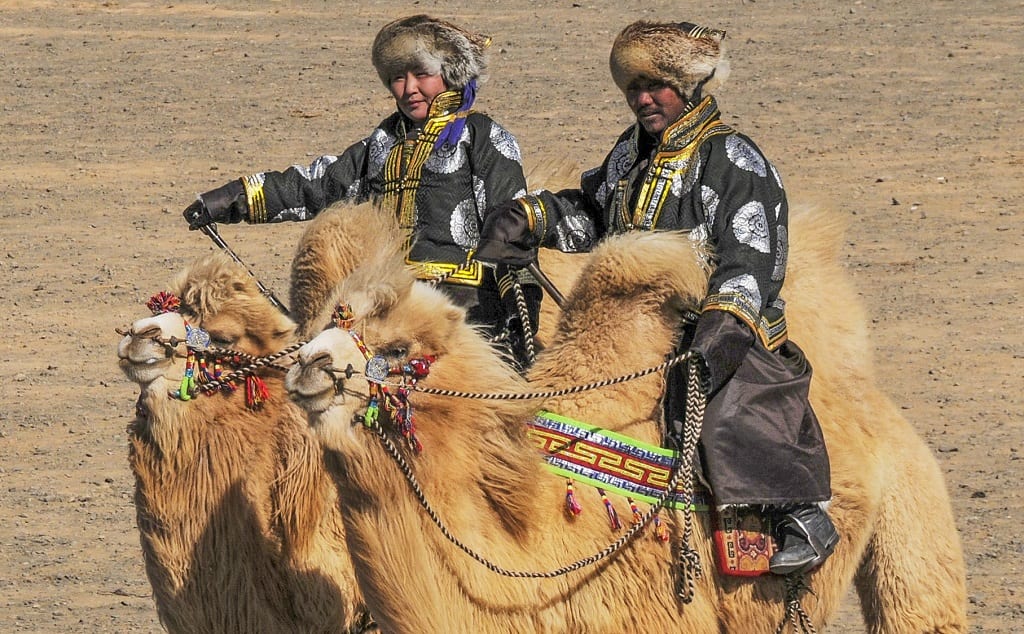 THE 2020 EVENT HAS BEEN CANCELLED DUE TO FEARS OF THE SPREAD OF THE CORONAVIRUS – HOWEVER NO CASES OF CORONAVIRUS HAVE BEEN REPORTED IN MONGOLIA.

During the Camel Festival, held in the Gobi Desert of Mongolia in March, nomadic herders show off their incredible skills during the biggest camel race in the world, alongside cultural activities involving colourful costumes and camel products.

The festival is all about honouring the camel, an animal that occupies a central role in the traditional lifestyle of local nomadic herders. Festivities start with camel parades followed by games where local camel herdsmen compete with each other in camel polo and camel beauty contests. Other highlights are Mongolian musicians and dancers performing with the Gobi desert as a magnificent backdrop.

The number one highlight of the festival is a 15-km-long camel race, listed in 2016 by Guinness World Records as the world’s largest one. It drew well over a thousand participants with the fastest camel and its rider finishing the race in just over 35 minutes. Before the race, a camel beauty parade sees the animals bedecked in colourful attire shown off to the crowds.

For more camel-related fun, check out the Pushkar Camel Fair in India.

Every year, thousands of Mongolians make the long journey from the capital Ulaanbaatar to watch the race – which is becoming increasingly popular with foreign visitors too. During the festival you will also get a taste of the Mongolian nomadic way of life through cultural performances, camel wool products and local food and drinks made from camel dairy.

Origin of the Camel Festival in Mongolia

A substantial part of the Gobi Desert is located in Mongolia, and the camel is the most suited pack animal to withstand its dry and cold climate as well as its high altitudes. The local Bactrian Camel, named after the ancient Central Asian region of Bactria, is therefore an important part of Mongolian life in the steppes. Apart from transporting goods, the camel’s wool is used to make clothing and blankets while its meat is dried in the sun before being consumed.

A key part of any Mongolia Travel experience is living in a ger.

Temeenii Bayar or the Camel Festival was called into existence by a local organisation of camel herdsmen to protect the Bactrian Camel population from a steady decline in numbers over the last decade, and to pass on the rich Mongolian camel raising tradition to younger generations. At the same time, the festival attracts visitors from other parts of Mongolia and from overseas. Coming here to experience the nomadic lifestyle of Mongolian camel herdsmen, they also give a boost to local tourism.

When and where does the Mongolian Camel Festival 2020 take place?

Temeenii Bayar or the Camel Festival 2020 takes place on 6 and 7 March outside Dalanzadgad, the capital city of South Gobi Province. Sometimes it also happens in one of the nearby smaller rural settlements. The South Gobi is about a day’s drive from Ulaanbaatar. It is worthwhile to add at least a day tour to one or several of the iconic sites of the Mongolian Gobi, such as the Vulture Gorge (Yoliin Am), or the Flaming Cliffs (Baynzag). During this period, prepare for snow and freezing temperatures.

The Camel Festival is one of the many Mongolia festivals throughout the year, from the Khövsgöl Ice Festival and Tsagaan Sar or Mongolian New Year in winter, to the Winter Golden Eagle Festival in March, and the Nadaam Festival in July.


Mongolia hotels comes in different options, from modern hotels to home stays with herder families. To search for accommodation in Mongolia, enter your dates in our hotel comparison engine to search hundreds of sites for the best deals: