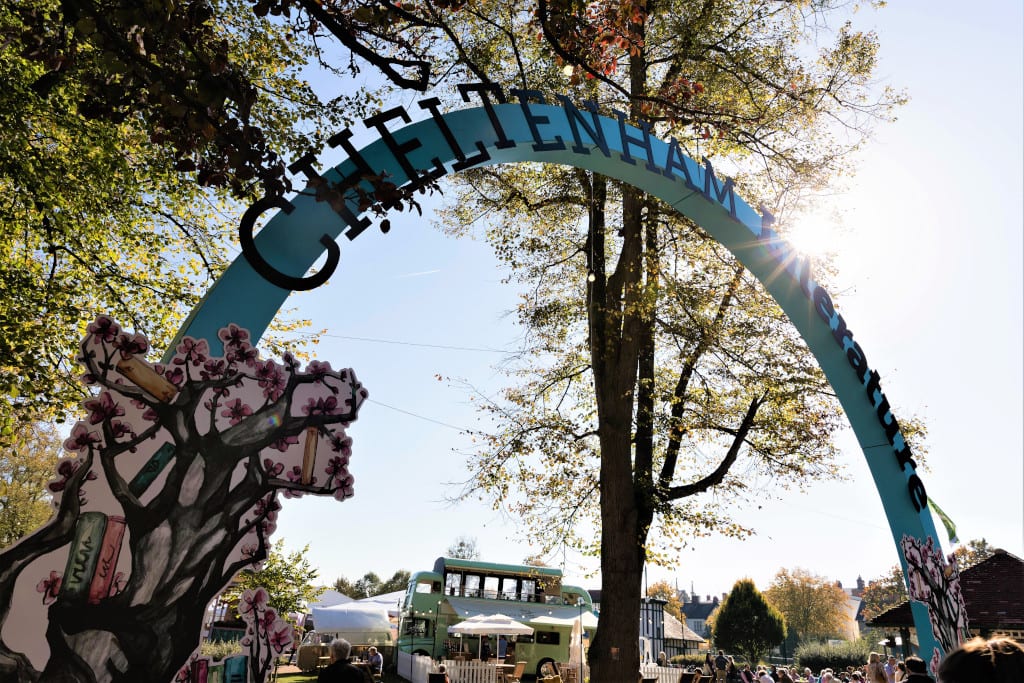 Could there be a more appropriate setting for The Times and The Sunday Times Cheltenham Literature Festival than the historic Regency spa town of Cheltenham?

Originally held in the town hall, the festival was the world’s first literary festival. It forms a key part of the Cheltenham Festivals season.

The Times and The Sunday Times Cheltenham Literature Festival 2019 Highlights

This year, marking the 70th anniversary of one of the UK’s leading literary festivals, will see some 900 writers, including Colm Tóibín, author of Brooklyn and this year’s The Sunday Times Award for Literary Excellence, and Cressida Cowell, new Waterstones Children’s Laureate descend upon the the Festival Village from 4 – 13 October, in addition to some of the most exciting young talent in the literary scene.

Nor are the authors restricted to the UK’s shores. Chris Tse and Kanako Nishi are amongst the tranche of international authors who will appear at the 2019 Cheltenham Literary Festival.

From the stage and cinema, actors Helena Bonham Carter, Davis Suchet, Christopher Eccleston and Sheila Hancock will pop in on the festival, in addition to Four Weddings director Richard Curtis.

From the world of music, the knight of the West End musical Andrew Lloyd Webber, as well as Blondie legend singer Debbie Harry, will join Status Quo’s Francis Rossi and the other WHAM, Andrew Ridgeley at the Festival.

The Off The Page series will include a Game of Thrones quiz night, American storyteller The Moth, jazz and poetry from Tongue Fu, and an evening of Joni Mitchell music, as well as a spoken word stand.

And if all this sounds a bit too serious, Richard Ayoade, Lenny Henry, David Mitchell, Paul Merton, Paul Whitehouse and Bob Mortimer will make sure there is plenty to laugh about too. And if that is not enough, then there are always the wonderful pubs of Cheltenham for you to continue your bookish debate.

Since therapeutic mineral waters were discovered there in the early 18th Century, Cheltenham has been a magnet for visitors.

On the edge of the Cotswolds with its gentle, quintessentially English scenery, Cheltenham is an Area of Outstanding Natural Beauty with The River Chelt flowing through the town on its way to the River Severn. Unsurprisingly, with this scenic location, the town is home to several festivals throughout the year, as the Cheltenham Festivals, including this world famous Literary Festival, which is held every October.

Following the theme of seven, there will be seven famous guest curators of the programme, Anthony Anaxagorou, Yomi Adegoke & Elizabeth Uviebinené, Tessa Hadley, Max Porter, Dominic Sandbrook, Robin Stevens and Leslie Vinjamuri. Seven partnerships with other international festivals will be in place with a seventy strong Reading the World reading list included in the programme.

Key societal changes will be explored through novels of the past seventy years, especially for those interested in the development of societal literary norms over the past seven decades.

Book festivals from around the world are set to join this special anniversary with writers from New Zealand, Lagos, Tokyo, San Francisco, Dublin, Toronto and Buenos Aries in attendance. The Podcast in Residence will encourage discussion on the past seventy years of the festival. There will also be street art from Cheltenham Paint Festival entitled, ‘Hurrah for Books’.

As usual, children’s literature will play an important part and the 2019 Literature for Schools’ programme is currently on sale. This year, the Cheltenham Literary Festival will have a programme of authors and illustrators to inspire your child, whether she be a toddler or a teen. There’s also The Woodland Trust Wild Wood with storytellers and activities, as well as a Secret Seven Mystery Trail marking 70 years of the child-favourite detective club.

The full programme of what’s on at the Cheltenham Literary Festival, can be found here.