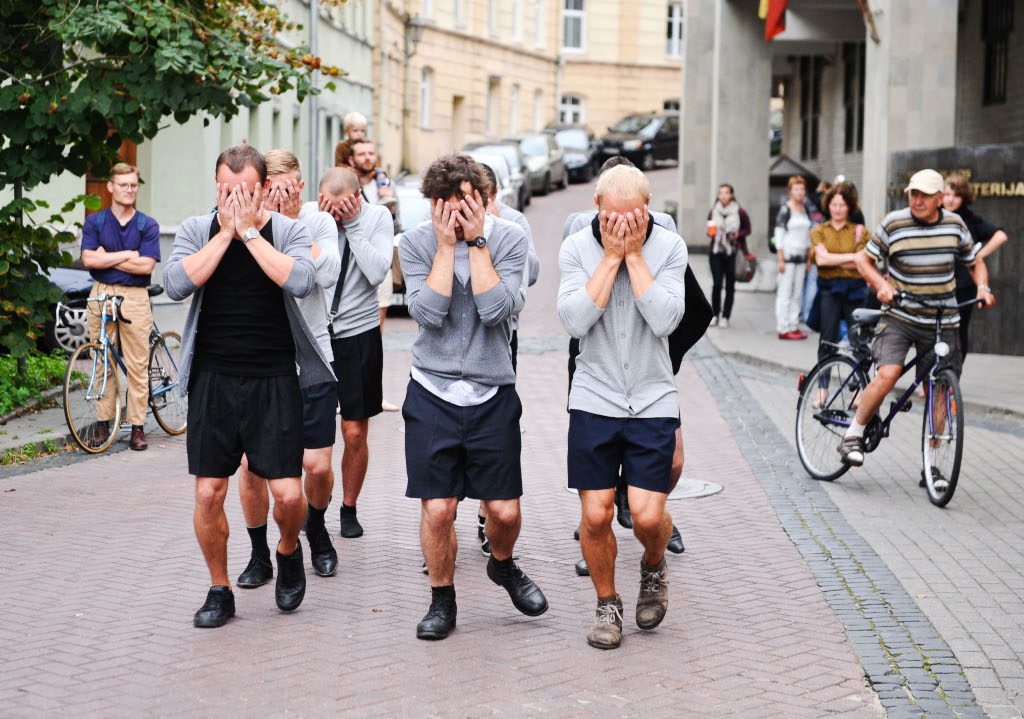 Derby Festé has traditionally involved a weekend of the best outdoor entertainment from some of the top performing companies around Europe.

Although there will be no major event this year, all activities will be performed in a Covid-safe manner, while maintaining the vibrant nature associated with the festival. This year’s programme will see the streets of Derby come alive with everything from hip hop dance theatre to giant kinetic sculptures.

Add to the mix street theatre with nine men running through the city (see main image), and a SciFi dance show performed in a 40-foot haulage truck, and Derby looks set for a showstopping weekend.

Chorus, a new installation from award-winning artist and British Composer of the Year Ray Lee, will launch the 2021 Festé. Lee’s work consists of giant metal tripods supporting rotating arms towering above the audience with loudspeakers emiting tuned musical pitches, while lights create the effect of planets in motion.

Chorus will be on 24 September at 7pm, 8pm and 9pm, at the Cathedral Green.

Hip hop artist Joseph Toonga (see below), will perform Born to Protest on Derby’s streets. It is the first outdoor piece for the Us Dance Theatre, highlighting black excellence and challenging racial stigma

On 25 September Choreography for the Running Male features nine male performers running through the city centre, to “transform expectations of male, group behaviour into something quite harmless and unexpected”.

Future Cargo by David Rosenberg and Frauke Requardt is a  SciFi dance show performed in a truck while the audience wears headphones.

The festival is not just about dance. A photographic exhibition by Camilla Greenwell will be held at Derby’s Déda. Also, the city will also be lit up with neon and LED installations from artist Tim Etchells. Neons: Tim Etchells can be seen in public spaces to January 2022.

Derby Cathedral will stay open until 9:30pm on 24 September for choral music, heritage and culture. Listen to a live rehearsal by the Voluntary Choir between 7:30 pm and 9pm.

The new Museum of Making, a contemporary space telling Derby’s 300-year history, and the Derby Museum Art Gallery will have special late openings on 24 September until 10pm.

Fullr details of what is going on for #Feste21 can be found here.

For more ideas of what to do when in Derby, read, Things to Do in Derby: from Pubs to Suffragettes.

Other Festivals in Derby

In addition to the Feste, the city also has The Great Derbyshire Beer Festival in April and Derby Folk Festival in September / October.

To learn more about Derby Festé

For tourist information on things to do in Derby

Main image : Choreography for the Running Male. All images provided by organiers.