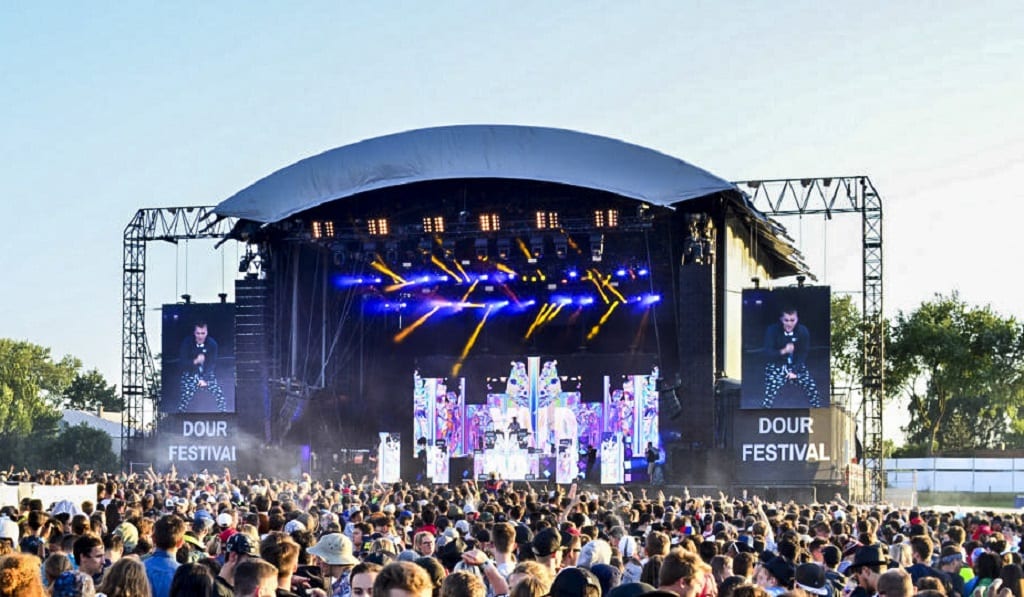 Dour Festival is the biggest music event in the French speaking part of Belgium featuring eight stages and attracting a quarter of a million revellers. Held in July, this is one of Europe’s most eclectic music festivals where its unique and diverse line-up combines legendary icons with exciting new discoveries.

This year the Dour Festival (in English pronounced with “oo” as in “cool”) is spread over five days with over 250 bands and DJs dishing out their tunes and beats. Dour Festival, named after a nearby Belgian village,  is famous for its alternative line-up with music styles ranging from dubstep, electro, RnB, reggae, indie, pop and rock to punk, metal, hardcore, house, techno, hip hop, rap and Drum ‘n Bass.

With this edition the Dour Festival is entering its 4th decennium which, together with the fact that it has always been sold out since 2005, indicates that it keeps on succeeding in attracting the most groundbreaking acts.

Last year’s edition included performers like alt-J, Diplo and The Chemical Brothers who, together with new, promising talent, made for a great, long music festival weekend. As the saying goes amongst its revellers, Dour c’est l’amour, the festival has once again announced an exceptional bill with over 250 international and Belgian names.

Cypress Hill, Vince Staples and OrelSan will no doubt delight the fans of American and French rap while London-based Ocean Wisdom has garnered a reputation for ‘the next big thing’ in English rap. The Brooklyn quintet Phony Ppl on the other hand, bring a mix of jazz, soul, ambient, funk and hip hop. Lovers of punk rap will look out for the Sacramento-based Death Grips while London band Fat White Family is known for its cataclysmic rock and mad concerts.

If you like Belgium festivals, don’t miss Gentse Feesten in Ghent, the Brussels Summer Festival and Pukkelpop in Hasselt.

Other international acts to look out for include Yonatan Gat, MNNQNS, Nakhane, Moonshine, Jazzy Bazz, Nina Kraviz and many more. For a complete list of the 2019 line-up, click here.

The eight festival stages are as diverse as its line-up of performers:

The Last Arena is the festival’s main stage – from hip hop and rock to reggae and electro, go there to see crowd pleasers.

Red Bull Elektropedia Balzaal is where top DJ talent play non-stop from 3pm to 3am to a cutting-edge lightshow turning earth into heaven for clubbers.

Boombox is where the best of soul and hip hop mix with RnB and Swing artists.

La Petite Maison Dans la Prairie, or The Little House on the Prairie, is for lovers of indie music to watch up-and-coming talent play next to established bands.

Dub Corner is dub culture’s home where dubplate lovers will not want to leave. It’s the festival’s smallest tent but bursting with charm and surprises.

Le Labo is where you head to if you want a more intimate and novel environment. From world music to pure rock, new trends and ideas are tested and experimented with here.

The Rockamour is a little oasis hidden by sea containers at the heart of the festival where public recordings take place and where you can roar techno classics during “Karaokéchorale”.

Over the years, the Dour Festival has gathered a reputation for its strong ecological awareness, as well as its willingness and commitment to promote local talent.

The organisers have partnered with the local eco non-profit organisation 3D Asbl to move beyond the standard solutions to how to offset ecological impacts, focusing on sustainability, awareness and waste management as well as managing the social and local impacts.

Located now in the heart of a wind turbine park, Dour Festival is known for its genial ambience, as reflected in the diversity of its line-up, and was elected in 2010 as best medium-sized music festival at the European Festival Awards.

Where is Dour Festival located

The festival is at Plaine de la Machine à Feu, in the municipality of Dour which is located in the French-speaking part of Belgium near the border with France.

How to get to Dour Festival

By far the best choice is by train. The Belgian railways will increase their capacity during the days of the festival and offer a special festival return ticket to any Belgian station for only 10 Euro. Click here to buy a ticket online. The nearest train station is Saint-Ghislain from where you can hop onto a free shuttle bus taking you to the festival grounds and the adjacent camping site.

If you want to go by car, the organisers encourage you to hire an eco-friendly electric car. They offer a privileged parking lot for electric cars where you can recharge your car with 100% solar powered energy.

You can also travel by coach from the UK, France, Luxembourg, the Netherlands, Switzerland and within Belgium. Click here for more details.

If plane is your only alternative, there are three airports close to Dour: Brussels Airport (Zaventem) and Charleroi Airport in Belgium, and Lille Airport in France. All three have easy train connections to Saint-Ghislain train station.

Where to stay during the festival

The festival provides a range of camping options including regular camping, glamping and green camping, each offering access to people with reduced mobility. Click here for details.

Alternatively, use our booking portal which searches and compares multiple websites to find you the best accommodation in Belgium:

More further details including ticketing and all other practical information