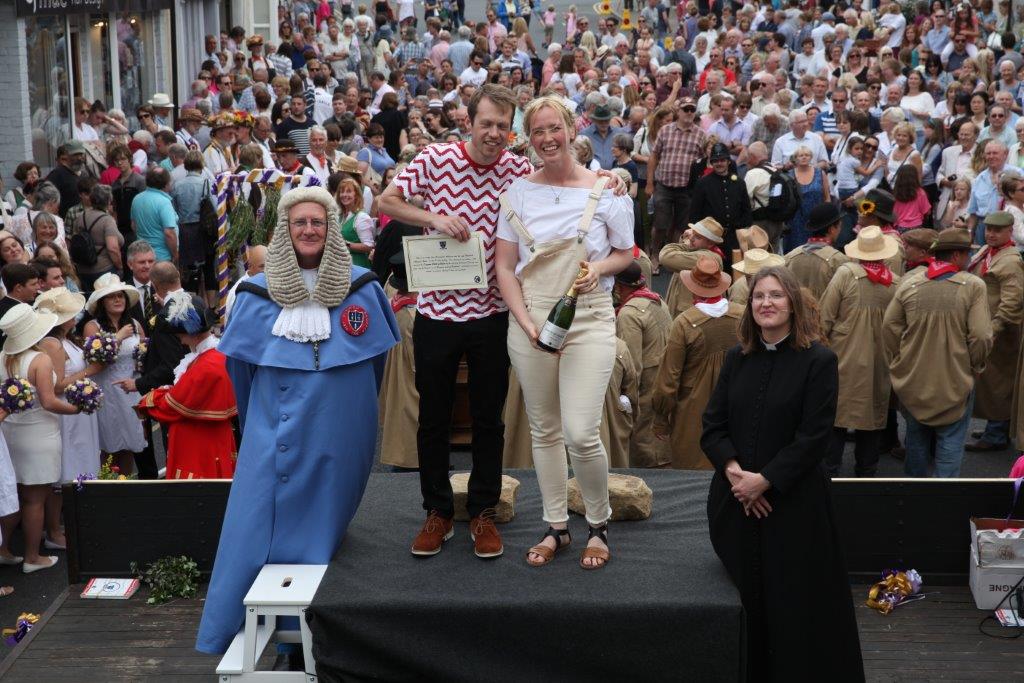 Few of the many festivals in the UK are steeped in a history as long as the Dunmow Flitch Trials. Held every leap year, in Great Dunmow Essex, the trials are valid for any married couple that has not wished themselves unwed in the past calendar year and a day.

To prove their case the ‘claimants’ are interrogated by counsel before being judged by a jury consisting of 12 unmarried men and women between the ages of 18 and 25. Their reward – a flitch of bacon?

What is a Flitch of Bacon?

A flitch is half a pig sliced down the middle from its snout to its tail. The losers get a leg of gammon. For this is a trial of love against the pig.

Origins of the Dunmow Flitch

The origins of the love trials are disputed. Some believe they stem back to 1104 when the Augustan Priory of Little Dunmow was established. Other believe the first trail was instituted by Robert Fitzwalter sometime in the 13th century.

What is known is that by the 14th century the trials were sufficiently well known to have been referred to by William Langland in The Vision of Piers Plowman, as well as by Chaucer’s Wife of Bath.

Unfortunately, records were not kept of the winners of the Flitch until 1445, when Richard Wright travelled all the way from Norwich to return home with the bacon.

The flitch continued to be awarded until the 18th century, with the last successful claimant of the ancient trials being on 20 June 1751.

There was a further attempt in 1772, that was denied by the Lord of the Manor. After that the trials faded into anonymity until the Victorian novel The Custom of Dunmow written by Harrison Ainsworth in 1854 gave them a kiss of life. The following year, the Flitch trials were held for the first time in a century, but this time along the road in the town of Great Dunmow rather than its Little village neighbour.

They have continued there ever since. From the Second World War onwards the trials have coincided with each leap year.

The modern Dunmow Trials follow the format of a court with Counsel representing both the claimants and the donors of the flitch of bacon. A Judge tries to preserve some degree of decorum aided by the Usher.

However, these trials are not the stolid affairs of the Old Bailey with as much emphasis on entertainment as legal propriety.

Claimants do not compete against each other, but against the pig, so it is conceivable that each – or none – will be successful.

Those couples that have convinced the jury of their recent marital bliss are then carried on the four-hundred-year-old Flitch Chair to the Market Place next to the Star Inn, where they take the traditional Flitch oath knelt on pointed stones – a most uncomfortable experience akin to taking the initial marriage vows. After this they most likely will retire across the road to the Saracens Head.

The trials are open to anyone around the world – previous winners have come from Australia, Canada and the US – thought quite how they got the bacon past customs is unsure. It’s also open to same-sex couples, so long as they are married.

Dunmow is by no means the sole town to have held a flitch trial, although it is believed to be the only one that has survived into the twenty first century. A similar tradition was maintained at Wychnoure until the eighteenth century. The Abbey of St Melaine in Rennes, France also held a similar trial although it is reputed that the flitch of bacon there went unclaimed for six centuries.

When are the Dunmow Flitch Trials?

Tickets are on sale now at www.dunmowflitchtrials.co.uk or at Flitch Travel on Dunmow High Street.

Where are the Flitch Trials Held?

Originally the trials were held in Little Dunmow, but since the 19th century they have been located in Great Dunmow, Essex. Claimants are led from the Saracens Head Dunmow to Talberds Ley, close to the Doctors Pond, where a marquee will house the proceedings.

Where is Great Dunmow?

Great Dunmow is as far from TOWIE as you can get in Essex. A few miles from Stansted Airport, you could conceivably fly in for the event. But that would be a pity as the town is wonderfully located, within the London commuter belt, and close to the beautiful Essex towns of Thaxted and Finchingfield, as well as Saffron Walden. Really this is an unmissable occasion – so take the leap.

More information on the Flitch Trials

For more details, and to buy tickets, visit the official website, here.