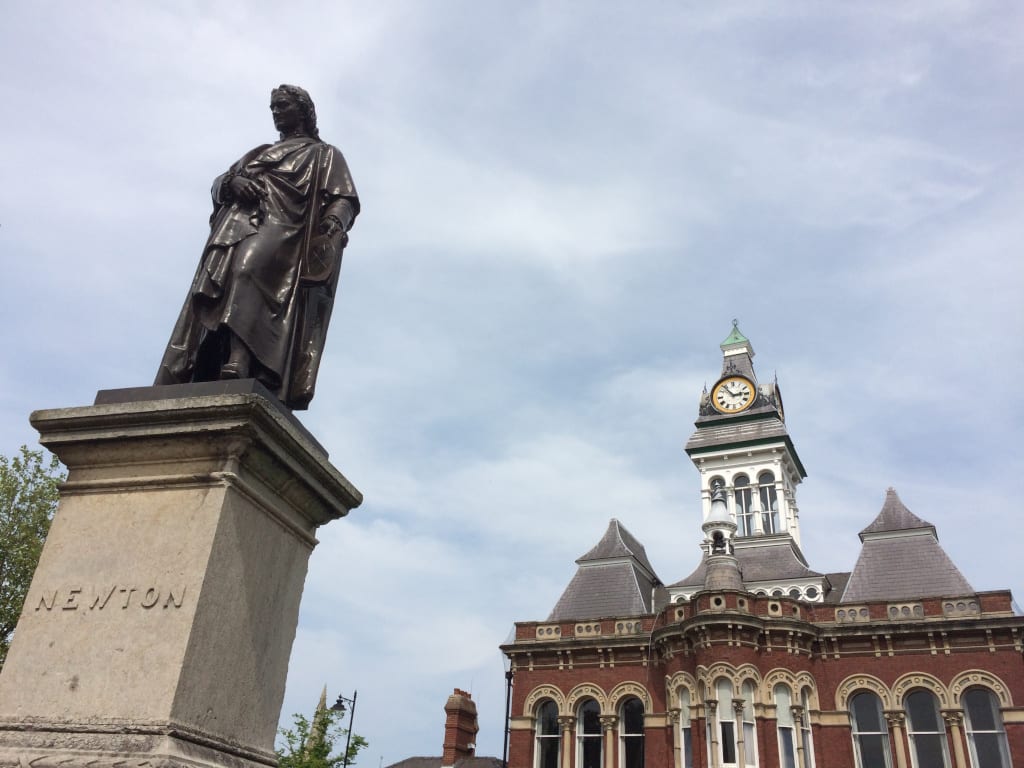 Visitors to Sir Isaac Newton’s home county can celebrate a true global giant thanks to a quirky journey through arts and science in the innovative five-day Gravity Fields festival in Lincolnshire this September.

Staged every two years, Gravity Fields is the UK’s only festival dedicated exclusively to the scientific legacy of Newton – born and raised at Woolsthorpe Manor near Grantham, and a pupil at the town’s King’s School.

Woolsthorpe was home to his world-changing thoughts on light, gravity and mathematics, with early drawings hand carved on Manor walls. The apple tree that famously inspired his theory of gravity survives to this day.

With a line-up of nationally and internationally renowned scientists, as well as some of the best contemporary talent in the art world, Gravity Fields Festival, organised by South Kesteven District Council, has a packed programme of science, arts and heritage events in and around Grantham, 26-30 September.

This year, the Festival celebrates another Lincolnshire pioneer, botanist Sir Joseph Banks. It’s 250 years since he sailed to Australia on board HMS Endeavour with Captain Cook, before returning a celebrity with 30,000 plant specimens.

Marking this historic milestone, the 2018 festival has a theme of Voyages of Discovery culminating in a show-stopping outdoor arts spectacle on Saturday 29 September and the spectacle of HMS Endeavour ‘sailing’ up Grantham High Street. Inspired by the discoveries of the New World and boosted by funding from the Arts Council, the evening’s free entertainment includes French company TILT’s light garden and an astounding aerial show from world-class performers Gorilla Circus.

Among other highlights is a Night at the Manor, an after-dark experience at Woolsthorpe Manor, with night time tours of the house, science talks, street food and a party atmosphere.

New touring artwork, Museum of the Moon, will light up the nave of Grantham’s St Wulfram’s Church with a seven metre ‘hanging’ moon showing detailed NASA lunar imagery accompanied by a surround sound composition. Taking place under the Museum of the Moon, The Hogwallops bring a display of circus skills blended with physical comedy, clowning, juggling, storytelling and slapstick in a colourful and funny show.

The Festival also offers a chance to explore Grantham Library’s hidden treasures by viewing the extensive Newton Collection, including books dating from the early 1700s.

Sir Joseph’s legacy is also a lure for plant lovers all year round. Discover heritage plants and flowers in sweeping time-warp terraces at Easton Walled Gardens and time-capsule sites maintained by the Lincolnshire Wildlife Trust.

For more ideas on what to do in Lincolnshire, read: Lincoln Cathedral and Hidden England.

Other botanical-themed events at the Festival include ‘Plant Hunting in South America’, (26 September), a talk by Tom Hart Dyke (dubbed the new David Bellamy) – who shot to fame in 2000 when his Colombian jungle expedition went badly wrong.

For those looking for botanical heritage throughout the year, this part of Lincolnshire has plenty to offer.

Just a 15-minute drive from Grantham and close to Newton’s birthplace at Woolsthorpe Manor,  are Lincolnshire’s very own lost gardens, Easton Walled Gardens, an ancient 12-acre site lovingly restored after lying abandoned for half a century.

A stunning success story, its terraces harbour species from Sir Joseph’s’ era, with musk mallow, saxifrage, field scabious, common-spotted orchids, vetches and ancient grasses at their best in June following May’s  yellow carpet of cowslips. July is still colourful thanks to the scabious, knapweed and burnet saxifrage and August is seen as the ‘afterglow’. Other seasonal highlights at Easton range from snowdrops to sweet peas, and from tulips to roses, as well as wild flowers, meadow flora and summer floral terraces, making Easton a gardener’s delight to visit from March to October.

Lincolnshire Wildlife Trust also looks after a number of nature reserves noted for heritage plants and wildflowers, with meadows best between May and July.

And not forgetting, of course, that Sir Isaac Newton’s home at Woolsthorpe Manor has the famous apple tree that first put down roots around 400 years ago and inspired him to develop his theories on gravity.  It continues to bear blossom and fruit to this day.

The Gravity Fields Festival has a packed programme of science, arts and heritage events in and around Grantham, 26-30 September, and aims to appeal to visitors of all ages. Some events are free, and tickets for paid events are bookable through the website.