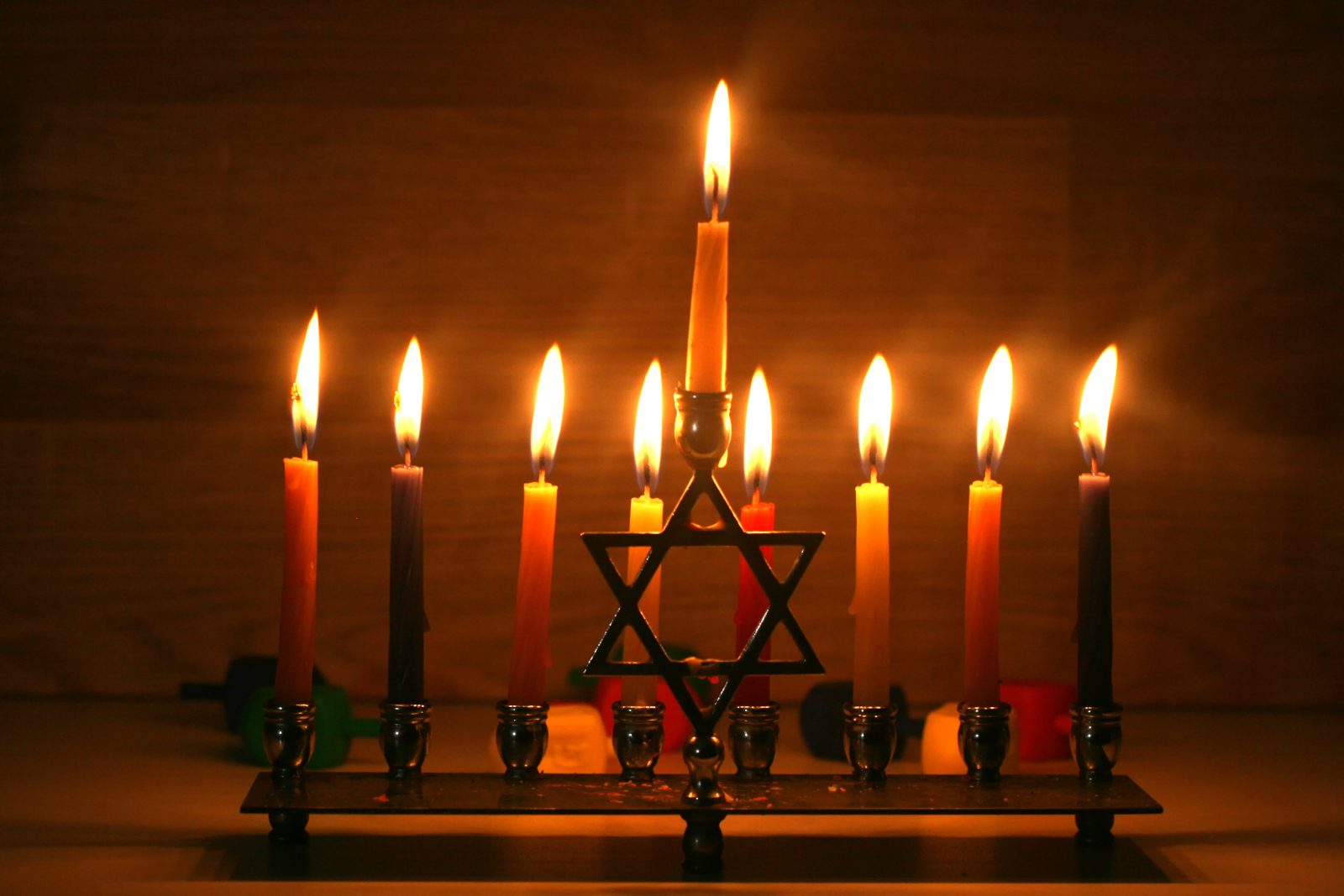 Hanukkah, also known as Chanukah or the Festival of Lights, is one of the most popular and beautiful Jewish festivals around the world. Taking place annually towards the year-end, participants light candles, enjoy special fried food and give presents to children.

Although only a minor festival in a religious sense – its story doesn’t appear in the Torah or Hebrew bible – the eight-day-long Hanukkah Festival of Lights has grown into the most popular of Jewish holidays, partly because of its proximity to Christmas.

The Hebrew word for Chanukah is commonly interpreted as “dedication”, a reference to an event in the second century BC when a group of Jewish rebels called the Maccabees emerged victorious over the Syrian-Greek army that tried to suppress Jewish culture and religion. When the Jews found their holy temple ransacked, they re-dedicated the temple by lighting the menorah or Jewish candelabrum. Although their oil supply was down to a single day’s worth, the little remaining oil kept the lamps burning for eight consecutive nights – believed to be a miracle that represents hope and is now commemorated with the Chanukah Festival of Lights celebrating liberation from oppression.

Central to all of the many traditions observed during the Hanukkah Festival of Lights is the lighting of candles on the Hanukkiah, a special menorah with eight arms and a taller, central branch in the middle which contains the candle to light the others. Every night, over a period of eight days, a new candle is lit, from right to left (or how the Hebrew script is read).

The lighting of the Hanukkiah can be observed all over the world where there is a Jewish diaspora (see below) but the most famous Chanukah lights are in the Old City of Jerusalem where both local and foreign tourists come to enjoy the magical sight of the eight-armed candelabra, many with different designs, flickering in window sills all night. Also most hotels and restaurants will display their menorah during this time.

For a festival of lights of a different kind, head to the Amsterdam Light Festival.

As part of many other Chanukah traditions, the “miracle of the oil” (see above) is remembered by eating special food fried in oil. Doughnuts with all sorts of fillings – from strawberry jelly and chocolate to pistachio and dulce de leche – are most popular and for sale everywhere in Jewish bakeries, but also very popular are latkes or oil-fried cheese and potato pancakes served with sour cream and apple compote, fried honey puffs and Moroccan Jewish fried fritter called svinge.

If you need to keep your kids busy, then they might be interested in spinning tops during the Hanukkah game of dreidel where the winner gets rewarded with gelt or chocolate coins wrapped in golden foil. But dreidel is not just for kids – the Major League Dreidel based in New York hold their Hanukkah dreidel tournament every year with hundreds of participants showing off their skills in the official MLD “spinagogue” playing zone.

The Hanukkah Festival of Lights is very much a communal celebration of hope but also a public act of defiance against those trying to destroy Jewish identity in the past – and, as is still worryingly evident, the present.

The Jewish menorah is one of Judaism’s oldest symbols and is a candelabrum containing seven candle holders. The Hanukkiah, or sometimes also called the Hanukkah menorah, is also a candelabrum but with nine holders (eight arms and the central stem), where the eight arms are all in line while the middle one is usually at a higher position and its candle used to lit the others. The Hanukkiah is only lit during the Hanukkah Festival of Lights holiday.

Where is Hanukkah celebrated around the world?

Hanukkah celebrations take place wherever there is a Jewish diaspora with noteworthy places including but not limited to:

The Americas: Hanukkah is celebrated throughout the Americas in a myriad of ways reflecting the traditions of the country each family came from. New York City, home to one of the largest Jewish communities in the world, is a great place to experience Hanukkah with a giant Hanukkiah – one of the world’s biggest – lit at the Grand Army Plaza, music festivals, traditional dancing and special Hanukkah menus in restaurants.

London: Over a quarter of a million Jews call London home and the lighting of a giant Hanukkah menorah at Trafalgar Square has become an annual tradition. Listen to school choirs and a cappella singers here, or pick up some free doughnuts.

Budapest: Despite the anti-Semitic rhetoric of Hungary’s current leadership, Budapest is one of the best places in Europe to celebrate Hanukkah with the Quarter6Quarter7 Festival – named after its historic Jewish quarter – hosting live Hanukkah concerts, theatre, film screenings, exhibitions and special Hanukkah events in its restaurants, bars and clubs.

Antwerp: Belgium’s second city is home to one of Europe’s largest orthodox Jewish communities and hosts many celebratory Hanukkah events open to locals and visitors alike. One of its highlights is its local Jewish bakeries churning out their delicious Hanukkah specialties during the festival. While there, check out our nine things to do in Antwerp in winter.

Kaifeng, China: Kaifeng’s first Jews are believed to have arrived during the 8th or 9th century as merchants from Persia and grew to number some 5,000 souls. Throughout the past centuries most of them became assimilated but more recently many of the estimated 1,000 – 2,500 Kaifeng Jews are trying to reconnect to their Jewish identity and celebrating Hanukkah is part of that.

Israel: Unsurprisingly, the best place to experience the Hanukkah Festival of Lights is in Israel. In Jerusalem, thousands of traditional Hanukkah candles light the streets at night creating an intimate, reflective atmosphere, while the party city Tel Aviv goes in overdrive with beach parties, live Hanukkah concerts, theatre and comedy. Most museums offer special Hanukkah events during the festival, and so do restaurants, bars and hotels. For sporty types, there’s the annual Olympics-inspired Hanukkah relay race that sees a burning torch passed hand to hand 32 km from the city of Modi’in to the Western Wall in Old Jerusalem where a giant Hanukkiah is then lit. And the best part of it is that it’s all kosher.

The only true way to spell the Jewish Festival of Lights is in Hebrew, a language that doesn’t use the Latin alphabet and that is pretty difficult to transliterate into English. That’s why you’ll come across no less than 16 accepted spellings in English of which Hanukkah and Chanukah – both correct – are the most common ones. Chanukah is the more traditional way of spelling while in recent years the Hanukkah variant has been adopted by the mainstream media and become the top spelling preference on the Internet.

The Hebrew lunisolar calendar – regulated by both the sun and the moon – is used to determine Jewish holidays making that the Hanukkah Festival of Lights doesn’t fall on the same date every year. This year Hanukkah 2022 starts on 18 December at sunset and lasts until 26 December.

Accommodation in and flights to destinations around the world during Hanukkah

If you are looking for hotels or flights, enter your dates in our flight and hotel comparison engine to search hundreds of sites for the best deals:

For information about travel to Israel:

Israel and other countries