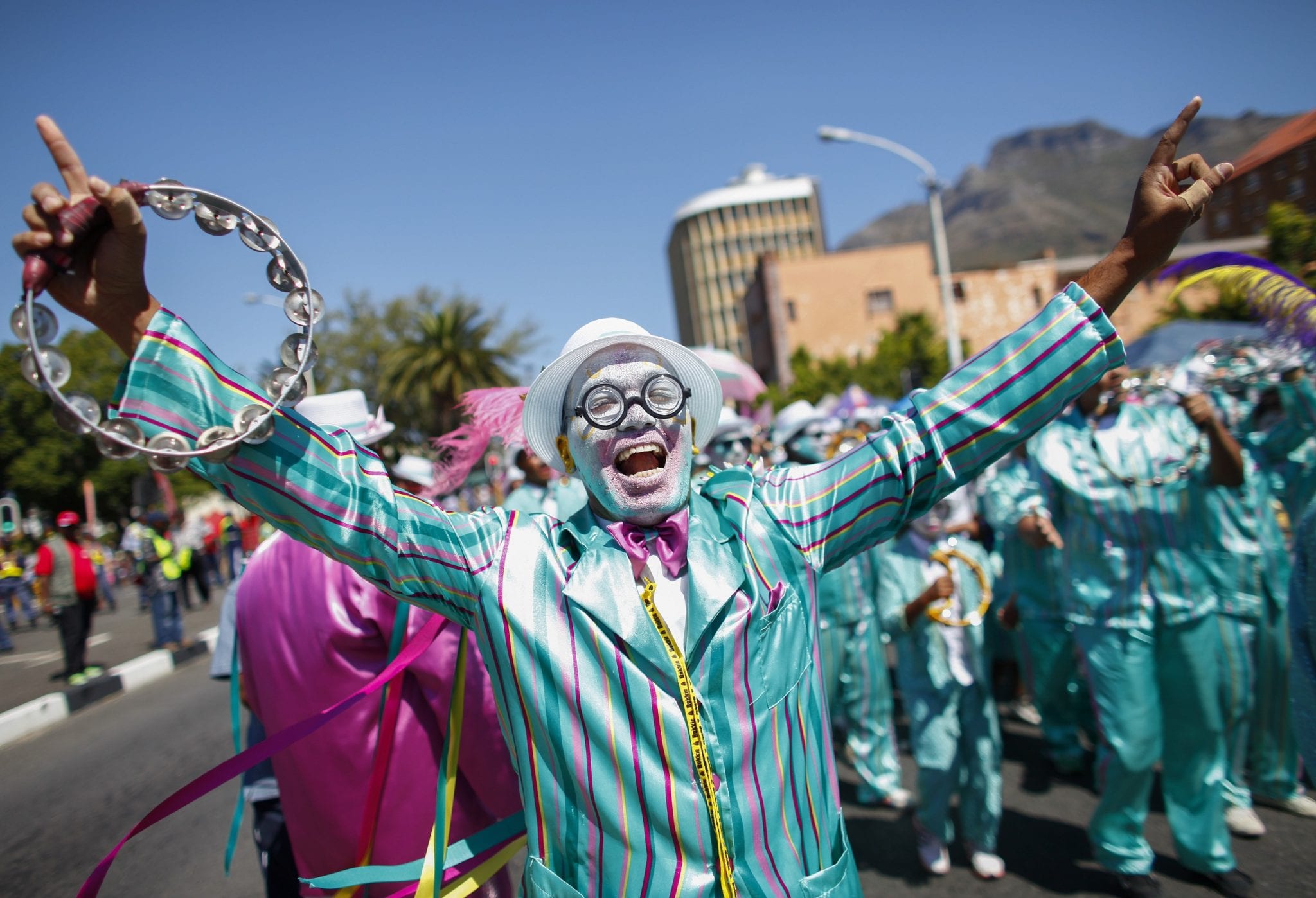 The Cape Town Minstrel Carnival, or Kaapse Klopse, is a festival held in the South African city in early January. Also known as the Tweede Nuwe Jaar (or Second New Year), some 13,000 minstrels assemble in klopse (or troupes) and parade through the South African city playing music on trumpets, banjos and, most importantly, the ghoema drums.

The music is an eclectic mix of Indian, Malay, Indonesian, East African and European reflecting the melting pot that was the Cape. But the music also reflects the music of American minstrels. One Malay song is entitled ‘Daar Kom Die Alibama’, after the Alabama ship upon which the minstrels arrived.

Rather than being a general melee of music like in the Rio Carnival or Notting Hill Carnival, at the Cape Town Minstrel Carnival the troupes are spread out so that the music can be heard distinctly without each troupe drowning out the preceding one.

Typically the minstrels come from the Afrikaans-speaking Cape coloured communities, who compete in a series of competitions. Although the parade takes place over just one day, the competitions continue into February at the Athlone Stadium.

The carnival’s history is tainted to say the least, stemming from colonial times when slaves were only permitted one day off per year – 2 January or Tweede Nuwe Jaar. The carnival united the whole Cape creole community for that solitary day.

Although folklore has it that the slaves were given the day off as their masters were too wasted from their celebrations of the day before, the official line is that the Governor at the time wished for the slaves to join in the New Year celebrations.

When slavery was abolished in 1834 the carnival continued, although during the Apartheid regime it was called the Coon Carnival, apparently after the white American minstrels who painted their faces like raccoons.

Traditionally the Kaapse Klopse minstrels also blacken their faces, probably to reflect the American minstrels, although there is an alternative view that it was to preserve their anonymity from their masters.

Unsurprisingly, the carnival changed its name to the Cape Town Minstrel Carnival to avoid derogatory racial slurs, although Justin Trudeau is allegedly supposed to be a big fan of the original moniker.

The carnival is seen as a celebration of survival and of renewal, celebrating the community that has survived slavery, segregation and Apartheid.

Kaapse Klopse has also provided the opportunity for many youths to learn how to perform music. Taliep Petersen and Jonathan Butler are just two musicians who have won the Juvenile Sentimental Trophy completion.

The first carnival troupe was formed in 1887. Now there are more than 60 troupes, some featuring up to 1,000 minstrels. The major prize is the Champion of Champion Award which has been won by the Pennsylvanians for the past 10 years.

Kaapse Klopse is normally held on 2 January each year, but in 2020 it will be on 4 January as the sunset of 2 January coincides with the Friday Jum’ah of the Muslim community.

Entertainment starts from 12pm with the opening ceremony on the Grand Parade at around 1pm, and celebrations will continue up until 10pm. The parade is between Hanover Street in District Six and Rose Street in the Bo Kaap.

The event, which will attract between 60,000 and 100,000 people is free to watch, although people have been known to sleep on the streets the night before to secure the best viewing spot.

Golden Circle tickets for the the choral competitions are available on Computicket.

If you are looking for an apartment or hotel in Cape Town during the festival, please fill in the form below.

British Airways flies direct from Heathrow to Cape Town. Alternatively, you can fill in the form below to work out the best flight from the airport nearest to you.

More information on the Kaapse Klopse

Things to Do in Cape Town

For further inspiration on what to do in Cape Town during the carnival, click here. Main photo: EPA/NIC BOTHMA.