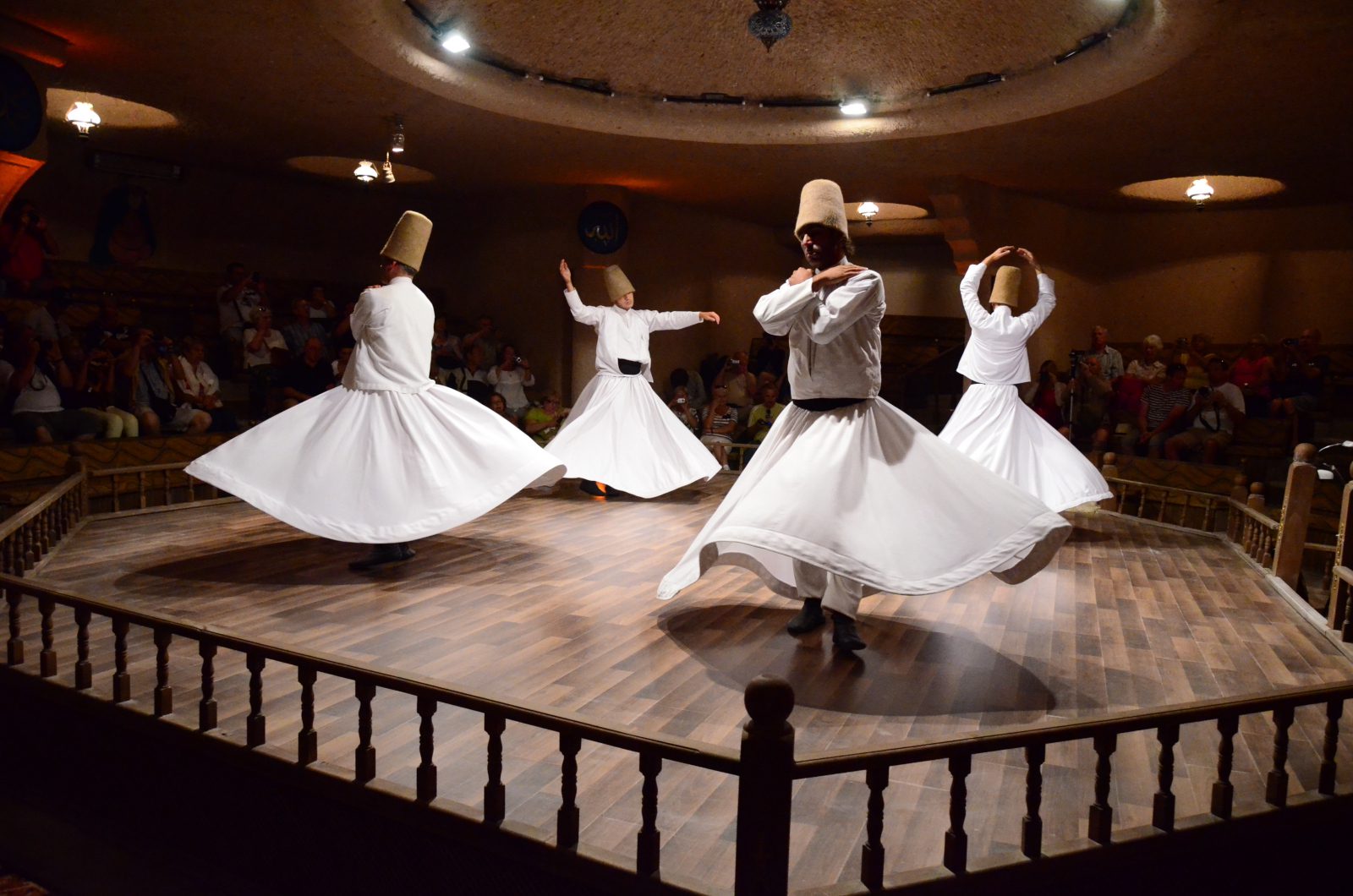 Each December the Turkish city of Konya will host one of the most exquisite ceremonies of spirituality with the mesmerising beauty of the Whirling Dervishes honouring Mevlana, the great Sufi mystic.

Thousands of people will gather to commemorate the life and teachings of the 13th century Persian poet and Sufi mystic Rumi – also known as Mevlana (“our master”). The unity of being is the central tenet in the transcendental teachings of this Islamic philosopher who believed that dance and music led to a higher consciousness, which in turn helped to discover divine love. The festival therefore is full of Sufi dance and music ceremonies – called Sema – performed by Mevleni or followers of Rumi.

The dances at the Whirling Dervishes Festival

The Sema rituals include trancelike whirling, a form of physical active meditation that is famous for its fast, controlled spinning. The Sema dancers are wearing a large, camel’s-felt conical hat that represents a tombstone for the ego, and are dressed in a wide, white skirt representing the ego’s shroud. When they take off their black, coffin-like cloak, it symbolises rebirth and marks the beginning of their dance. Their arms unfold with the right hand opening to the sky in prayer while the left hand – upon which their gaze rests – is turned towards the earth in a gesture of bestowal. The dancers then gradually start whirling counter clockwise.

While the dancing is both spectacular and spellbinding, it’s also a deeply spiritual act. Contrary to what many spectators believe, the dancers are not seeking ecstasy but a hyperconscious state. As they whirl, their head, arms and hands make small, controlled rocking movements to the rhythmic music of chanting, drums and the reed pipe. One foot remains firmly on the ground – a fixed conduit through which the divine blessings can flow to the earth – while the other propels the dancer around so that the body appears to move constantly and independently from the head and feet.

If you find yourself in Turkey, join Eileen Wise in the country’s Aegean region on a detox retreat in Bodrum.

“Dervish” – literally meaning “doorway” – is a common term for an initiate of Sufism who is considered as a bridge between the spiritual and material worlds, while the act of whirling is the climax of the Sema ceremonies. The Mevlevi Sema Ceremony of Turkey is recognised by UNESCO as one of the Masterpieces of the Oral and Intangible Heritage of Humanity.

The Sema dance is sometimes interpreted as spinning around the sun where the leader or sheikh represents the sun and the dancers the orbits of the stars and moon. However, most commonly it is thought of as a symbolic representation of death and rebirth and performed to express emotion, free the soul and achieve the love of God. While these days religious intolerance seems to be on the increase in our world, the Sufi festival of the Whirling Dervishes could be seen as a beacon of hope for freedom and culture – peace, love and tolerance all take central stage in Rumi’s teachings.

Where to see the Whirling Dervishes Festival 2022?

The Anatolian city of Konya, birthplace of the Mevleni order in the 13th century and home to Rumi’s tomb, is the best place to see the dances. The Mevlana Museum in Konya, housed in the original dervish lodge or tekke, has a Mevlana festival every year.

Read more about the Turkish capital – Istanbul City Break : an Engima in Time.

Of the festival’s 100,000 visitors every year in Konya, the vast majority are from Turkey. It’s an authentic, religious gathering and Konya is one of Turkey’s more religiously conservative metropolitan centres. Hence, some rules apply for attending the Whirling Dervishes rituals. Women will need to wear a headscarf once inside the venue while men and women are seated separately. Cameras are usually allowed but no flash during the performances – which would spoil the entire experience in any case. This part of Turkey can get cold in December so bring warm gear.

If you are looking to book a hotel in Konya, enter your dates in our flight and hotel comparison engine to search hundreds of sites for the best deals:

More information about the Whirling Dervishes Festival 2020 in Turkey