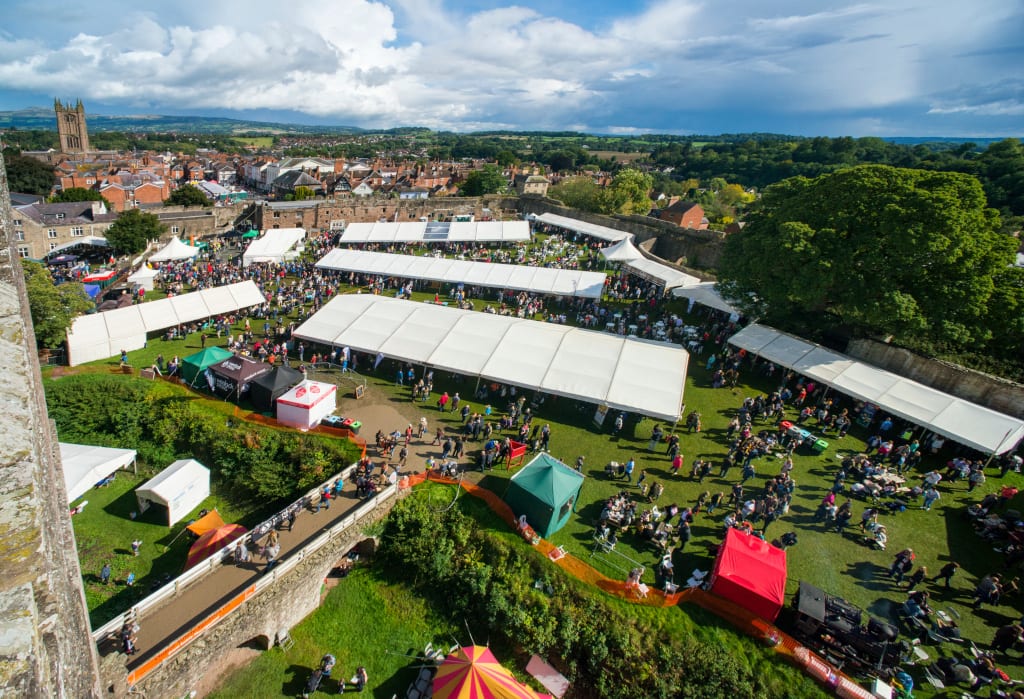 Now a veteran of the UK food festival circuit, the first Ludlow Food Festival was held in 1995 when members of the local Chamber of Trade and Commerce decided a food festival would be a great way to promote local producers, and draw visitors to the market town on the Welsh borders.

Part of the festival’s enduring success is no doubt down to its most wonderful location, set in Castle Square with its open air market and the incomparable Ludlow Castle.

The town of Ludlow has gone on to attract top chefs from all over the country, including Shaun Hill of the Merchant House, David Wilson Lloyd, Ken Adams and Claude Bosi. All were drawn by the quality of the local produce.

The 2022 Festival will be held from 9 to 12 September. Further details should become available here.

Inside Ludlow Castle, marquees play host to more than 180 selected local producers of traditional food and drink. Festival rules dictate that only those producers in counties on both sides of the border with Wales can sell their wares at the festival.

Outside, the town of Ludlow is consumed by a series of trails, where visitors sample and vote on the best bread, ale and sausage. On the morning of the Saturday of the festival, some 2,000 people will buy a form that entitles them to join the Sausage trail and wander around the butchers in town giving marks out of ten for the best bangers.

With food talks and demos, several by Michelin chefs included in the ticket price, the Ludlow Food Festival really is a prime cut on the circuit.

The Town of Ludlow

On the banks of the Teme set in the Welsh Marches, Ludlow is a well-preserved medieval town with magnificent castle ruins and in St Laurence’s Church, one of the largest England parish churches. With more than 500 listed buildings, mainly Georgian and medieval, especially along Broad Street, many a poet has waxed lyrical about the beauty of the town for centuries.

Ludlow Castle was founded by Walter de Lacy shortly after the Norman conquest of 1066, making it one of the first stone castles built in England.

When is the Ludlow Food Festival 2022?

Ludlow Magnalonga is a drink and food walk stretching for eight to 10 miles through the Marches on 14 August, this is sure to build up an appetite.

Tickets for the Ludlow Food Festival

Ludlow may be on the Welsh borders, but if you wish to go to a Welsh food festival then read our preview of the Abergavenny Food Festival.

Befitting a town of its size and tradition Ludlow has a tranche of pubs to suit any occasion, from pub lunches to evening meals, often with accommodation. For details of Ludlow pubs, and those in surrounding area, click here.

For more than 900 years there has been a market in Ludlow Castle Square. Now, you can choose from various purveyors of fresh vegetables, local game pies and artisanal goods, as well as wines from the Clee Hills, and work by local designers and painters. For details of the events going on at Ludlow Market, click here.

Make sure you book your accommodation well in advance. To find the best accommodation in Ludlow, please search via our comparison engine, which scans all the major booking sites so you don’t have to.