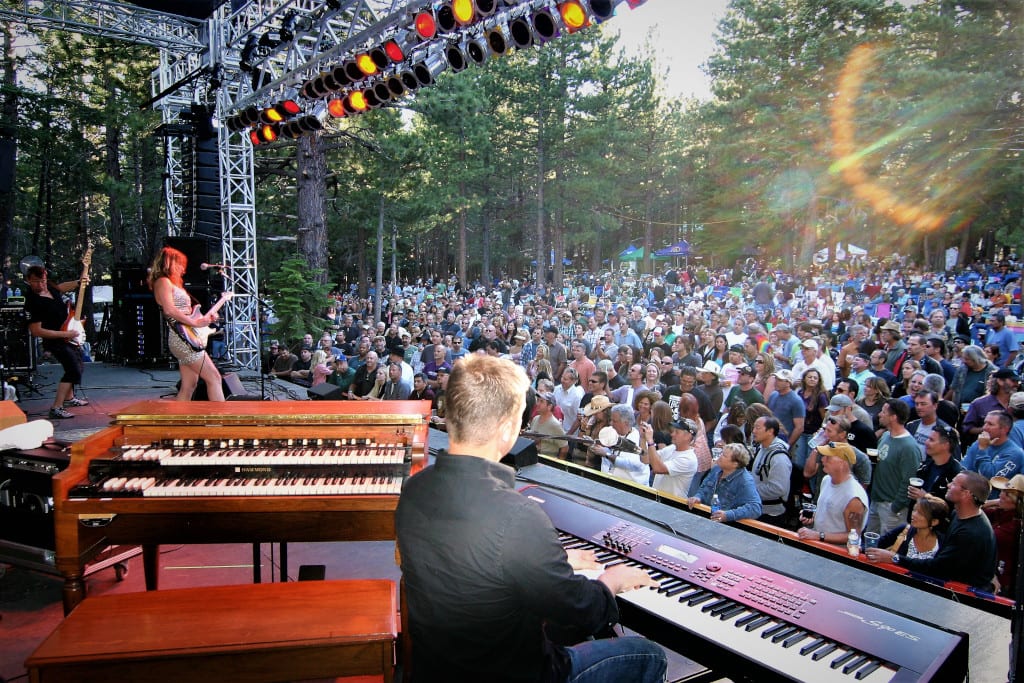 The Mammoth Festival of Beers and Bluesapalooza is a mix of many shades of blues music and even more flavours of craft beers and ciders.

Music ranges from blues to R&B, soul and rock, with more than 20 bands performing on twin stages during Bluesapalooza. The appaloosa is a tough, western horse, so blues as rugged as wild horses? That’s one for the mind to ponder.

The Mammoth Festival of Beers and Bluesapalooza has two beer tasting days, Saturday and Sunday, where some 80 breweries will be pouring beers and ciders.

A list of participating breweries can be found here.

The festival isn’t just about having fun, as it also supports benefits Infinite Music, the California Craft Brewers Association and One Tree Planted, as well as local non-profit charities and organisations.

History of the Mammoth Festival of Beers and Bluesapalooza

Like all almost all festivals, Mammoth had humble beginnings.

It began 25 years ago with ten breweries in the car park of Whiskey Creek restaurant and two garage bands. In the second year the organisers added the blues and the Mammoth Festival has grown steadily since then.

Now 25 years on, it draws thousands of revellers from across the globe and is one of the leading music and beer festivals in the States.

Mammoth Festival of Beers and Bluesapalooza 2021 Line Up

What else is there to do around Mammoth Lakes?

Mammoth Lakes is famous for the natural beauty that surrounds it. Activities include camping, hiking, biking, climbing, fishing, golf, kayaking and paddle-boarding. The scenery is a spectacular mix of dramatic peaks, icy lakes, old craters, jagged outcrops and hot springs. It is part of the Sierra Nevada and Yosemite is close by. For more on things to do in the Mammoth Lakes area, click here.

Want to incorporate The Mammoth Festival of Beers and Bluesapalooza into a trip around California? Read Mark Bibby Jackson’s Yosemite Park and Beyond : Tuolumne County.

When is the Mammoth Lakes Festival 2021

The festival is from Thursday 5 until Sunday 8 August.

Tickets for the Mammoth Festival of Beers and Bluesapalooza

Tickets are available for one, two or four days. To purchase tickets for the festival, click here.

Where is the Mammoth Festival of Beers and Bluesapalooza

Mammoth Yosemite Airport is a regional airport. It has flights from Los Angeles, Burbank, Denver, Orange County and San Francisco. Some flights are listed as seasonal, so check carefully, though Los Angeles is a year-round service. From the airport, the town is a ten-minute drive. A number of hotels run shuttles, and taxis are available.

There are a range of options for where to stay including luxury hotels, motels, bed and breakfast and camping. For information on camping or other local accommodation, visit www.visitmammoth.com or www.mammothbluesbrewsfest.com/lodging.

Alternatively, if you are including a visit to the festival with a wider trip in the area, to find the best accommodation – and worldwide flights – please search via our comparison engine, which scans all the major booking sites.

For more information on the Festival