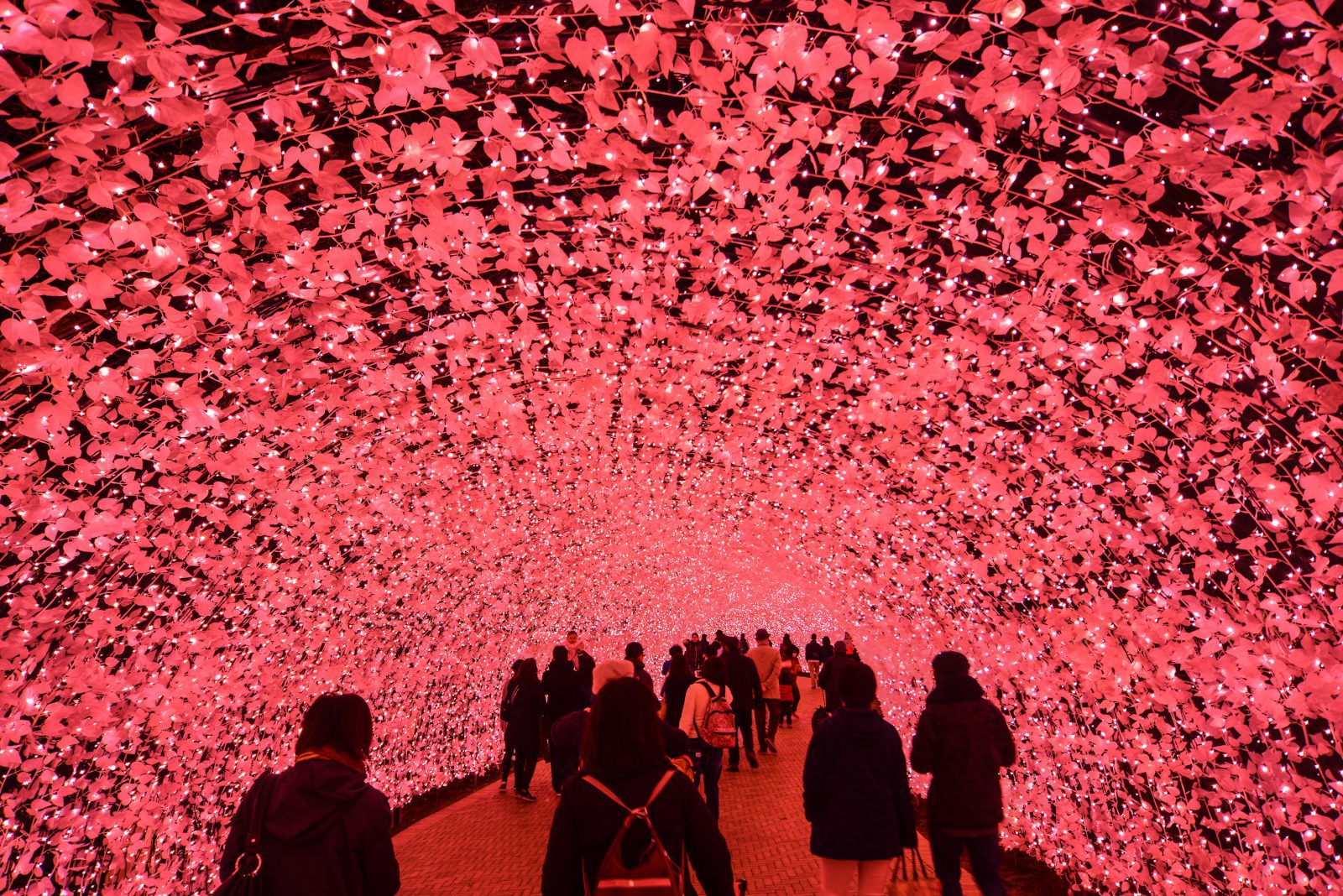 Nabana no Sato, a botanical garden in the Japanese prefecture of Mie, is home each year to one of the country’s best and biggest winter light festivals. During several months, magical light tunnels, animated light shows and millions of LED lights immerse Nabana no Sato into an endless sea of light.

The popular Nabana no Sato flower park comprises of several sections each dedicated to flowers. Its impressive number of flower varieties makes it possible to admire different species of flowers at different times throughout the entire year – even as a regular visitor, you’d be hard pressed to find the same types of flowers during different visits.

Some of Nabana no Sato’s popular yearly events include Ajisai Matsuri which is a large exhibition of hydrangeas at the beginning of summer, the Sakura cherry blossom season starting in spring, and other events involving tulips, dahlias, daisies, pansies and more. It’s also known for its impressive greenhouses. Non-flower attractions in the park include an Onsen or Japanese hot spring, and an iconic 45-metre-high observation platform called Mount Fuji from where visitors can get a terrific bird’s eye view onto the myriad of colours inside Nabana no Sato.

But the park’s most popular highlight of the year is without doubt its Nabana no Sato Winter Light Festival. This edition is the park’s 23rd anniversary since its opening and will see more than eight million LED lights illuminated each night under the general theme of nature and flowers, turning it into one of Japan’s most famous winter light festivals. Each section presents a different “landscape”, amongst which the most notable are a magnificent 120-metre-long and 5-metre-wide river of lights – installed on the central pond of the park – that regularly changes colour, as well as two impressive light tunnels stretching over 100 metres.

If you like Japanese colour then don’t miss the Cherry Blossom Festival Japan, or the equally colourful Japan Penis Festival Kanamara Matsuri.

The park’s biggest Winter Light Festival attraction is probably its elaborate animated light show at the main venue where an entire field lights up with various animated scenes of nature or famous landmarks such as Mount Fuji, each year to a different theme.

If all this light energy might worry you about its ecological impact, then rest assured, the entire installation runs on solar energy thanks to the solar panels installed throughout Nabana no Sato. Join the thousands of spectators who come here to enjoy the sweet flagrance of the flowers as they stroll warmly bundled up through the cold winter air admiring the lights extravaganza.


The two Japan light tunnels at Nabana no Sato are arguably the festival’s most characteristic features. The first one, the “Tunnel of Light”, stretches no less than 200 metres across the entire park and consists of some 1.2 million LED lights, each representing small flower petals.


More recently a second light tunnel has been crafted which is some 100 metres long and made up of 700,000 light bulbs. Called the “Kawazu Sakura Tunnel”, it is made to mimic the colours of the Kawazu cherry tree and, unsurprisingly, is very popular with couples for its romantic photo shoot opportunities.

The installation gradually changes colour to symbolise the cherry blossom’s evolution throughout the season.

When does the Nabana no Sato Winter Light Festival 2022 take place?

The Winter Light Festival starts in mid October and runs through to mid May 2023.

Where is Nabana no Sato?

Nabana no Sato is located at 270 Urushibata, Komae, in Kuwana City. The park is open from Mondays to Fridays from 9am to 9pm, and at weekends and public holidays from 9am to 10pm. The light displays are turned on a few minutes after dark.

During the Winter Light Festival, admission to the park is 2,300 yen which includes a 1,000-yen voucher to spend at Nabana no Sato’s restaurants, cafés, beer garden and souvenir shops. At weekends and public holidays it tends to be quite busy so if you prefer quieter moments then consider visiting during weekdays.

Where to stay: hotels in Japan


If you are looking for accommodation in and flights to Japan then enter your dates in our flight and hotel comparison engine to search hundreds of sites for the best deals:


There is a Japanese-only website for Nabana no Sato, but unless you read Japanese you may want to consult the website of the Japanese National Tourism Organisation.