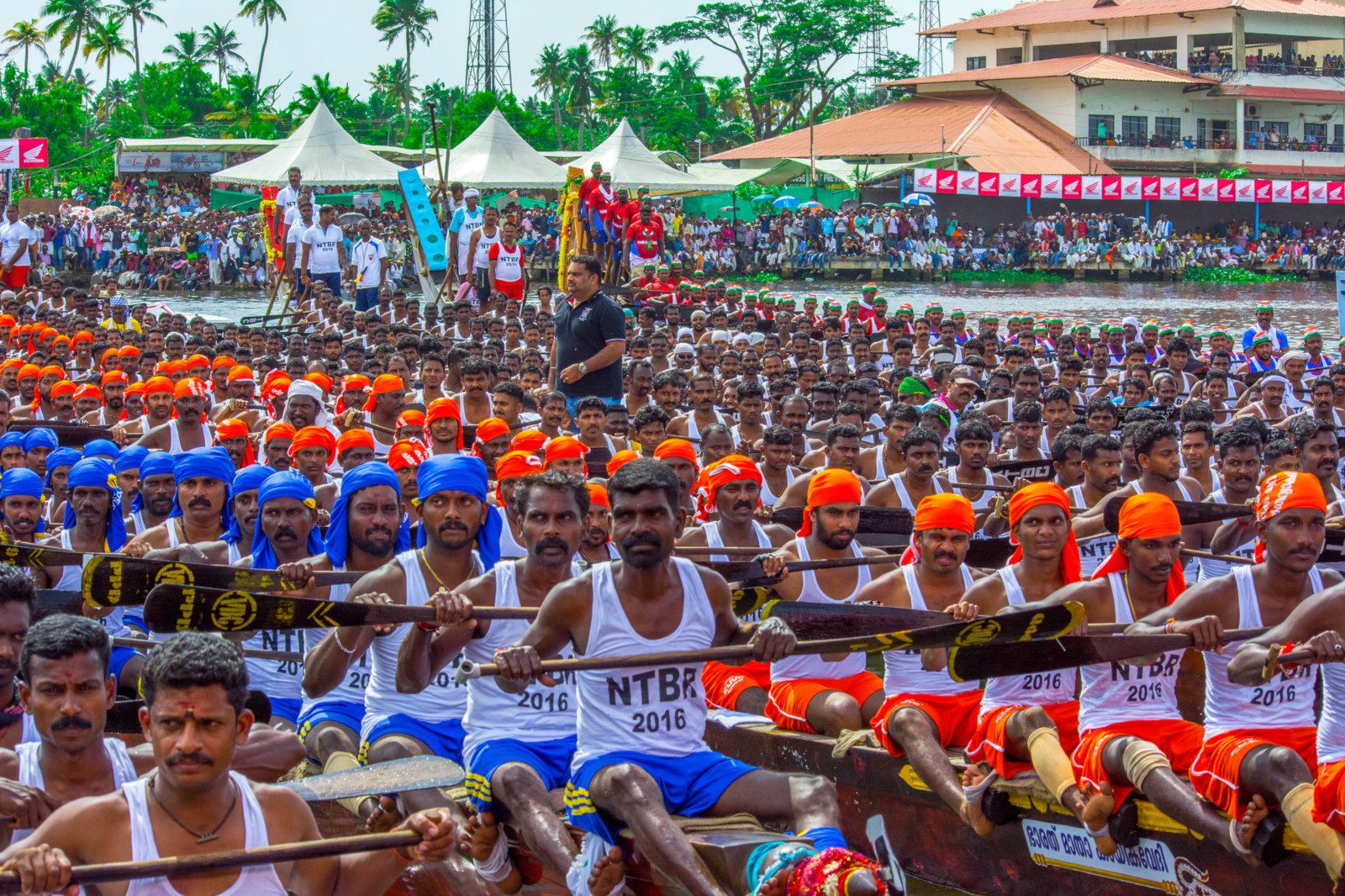 Usually held every year on the second Saturday of August – although in 2022 it will be on 4 September – , the Nehru Trophy Boat Race that sees huge, iconic snake boats engaged in a fierce and colourful contest, has turned into one of the state’s most popular and renowned tourist attractions.

Since 1952, Punnamada Lake – India’s lengthiest lake – is where teams in long, black canoes compete against each other in a commemoration of Kerala’s maritime past. The Nehru Trophy Boat Race is part of an old tradition that reflects the rivalry between nations over the monopoly of the trade in spices. Called chundam vallams or snake boats, the canoes carry 100 to 150 expert oarsmen and are up to 38 metres long, holding the record of biggest water vessels in sports.

Although it is the most popular one, the Nehru Trophy Boat Race is not the only boat race being held in that period. The whole region attracts thousands of spectators during this time, coming to watch other boat races too (see below) in addition to decorated boats, spectacular floats and ceremonial water processions that are also part of the festivities.

In the run-up to the Nehru Trophy Boat Race, the rowers – both men and women – train rigorously to move in harmony with each other to the tune of the boat song which is called Vanchippatu. In previous generations, devotional songs accompanied deities that were carried in the boats, while nowadays the names of the different boat races (see below) also reflect the religious and cultural elements of the event.

What is the Nehru Trophy Boat Race?

This is the most competitive of all of the boat races held in Kerala and one of its most popular tourist attractions. Huge crowds of both local and foreign tourists gather at the shores of Punnamada Lake near the city of Alappuzha. Villages from within the wider region compete against each other. It’s a great honour for your village boat to win the trophy that will be cherished for the rest of the year.

For other great festivals of India, check out Diwali, Durga Puja, and Holi festival India.

The history of the Nehru Trophy Boat Race goes all the way back to a 1952 visit to Alappuzha by the late Pandit Jawaharlal Nehru, India’s first Prime Minister. An improvised race with snake boats was held to honour his visit and he was reportedly so impressed with the boats that he jumped into one, ignoring all security protocols. He later donated a trophy of a silver snake boat to show his gratitude to the people. Since then, the boat race has become a fixture on Kerala’s summer calendar.

When is the Nehru Trophy Boat Race 2022?

This year the 68th edition of the race will be held on Saturday 4 September 2022.

How to get to the Nehru Trophy Boat Race

The closest airport is Cochin International Airport that serves the city of Kochi (sometimes also referred to as Cochin) and lies at a distance of about 85 km from Alappuzha. In Kochi, which is about an hour’s drive by car from the airport, you can take a train to Alappuzha from where it’s some 7 km to Punnamada Lake.

Champakulam Moolam Boat Race: this race means the opening of the boat racing season in Kerala and is one of the most popular ones in the state. Like with the Nehru Trophy Boat Race, highlights include beautiful floats, decorated boats, a ceremonial procession and the royal snake boats themselves which get their epithet from their bow resembling the raised head of a snake. The nearest airport is Cochin International Airport while Alappuzha’s railway station is about 26 km away from the river at Champakulam. The 2020 date was 4 July.

Aranmula Uthrattadi Vallamkali:  the religious ritual of this stunning carnival of boats will keep you mesmerised when rowers dressed in traditional attire glide their snake boats over the calm waters of Aranmula’s Pamba River. Aranmula is about 10 km away from Chengannur railway station while the nearest airport is Trivandrum International Airport serving Kerala’s capital Thiruvananthapuram some 117 km away. The 2020 date was 4 September.

Payippad Jalotsavam: in this race, held annually on the Payippad River nearby Payippad, Alappuzha, everything revolves around team spirit. This is one of Kerala’s oldest boat races that attracts big crowds cheering on the rowers and which also includes water float parades, elaborately decorated boats and many folk art performances. The nearest railway station is Harippad, at a distance of about 5 km, while the nearest airport is Cochin International Airpor.

Sree Narayana Jayanthi Boat Race: unlike the other Kerala boat races which are competitive or ritual races, this race – more popularly known as the Kumarakom Boat Race – is to commemorate a famous Indian social reformer, Sree Narayana Guru, who visited the village of Kumarakom in 1903. There’s also a grand procession of the boats, accompanied by dance and music performances. The race takes place on Sree Narayana Guru Jayanthi Day, in the village of Kumarakom. Kumarakom consists of a cluster of islands and is located about 14 km from the city of Kottayam.

Indira Gandhi Boat Race: in memory of Indira Gandhi, the late Indian Prime Minister and the only child of Jawaharlal Nehru, this race will take place at the Marine Drive in Ernakulam, the central and mainland part of Kerala’s second-biggest city Kochi (also sometimes known as Cochin). It is popular for its highly competitive spirit. The 2021 date has not been announced yet – watch this space for updates.

The beginning of the boat racing season in Kerala also marks the run-up to the Onam Festival in the same state, sometimes referred to as the Harvest Festival. Onam itself is an additional reason for visiting Kerala at this time. For more details, read our article on the Onam Festival in Kerala.

The Nehru Trophy Boat Race is celebrated throughout the entire Indian state of Kerala. To find the most suitable accommodation in Kerala and the most convenient flights, please try our booking portal which searches and compares multiple websites to find you the very best deals on hotels and flights.

Try the official website of the Nehru Trophy Boat Race.