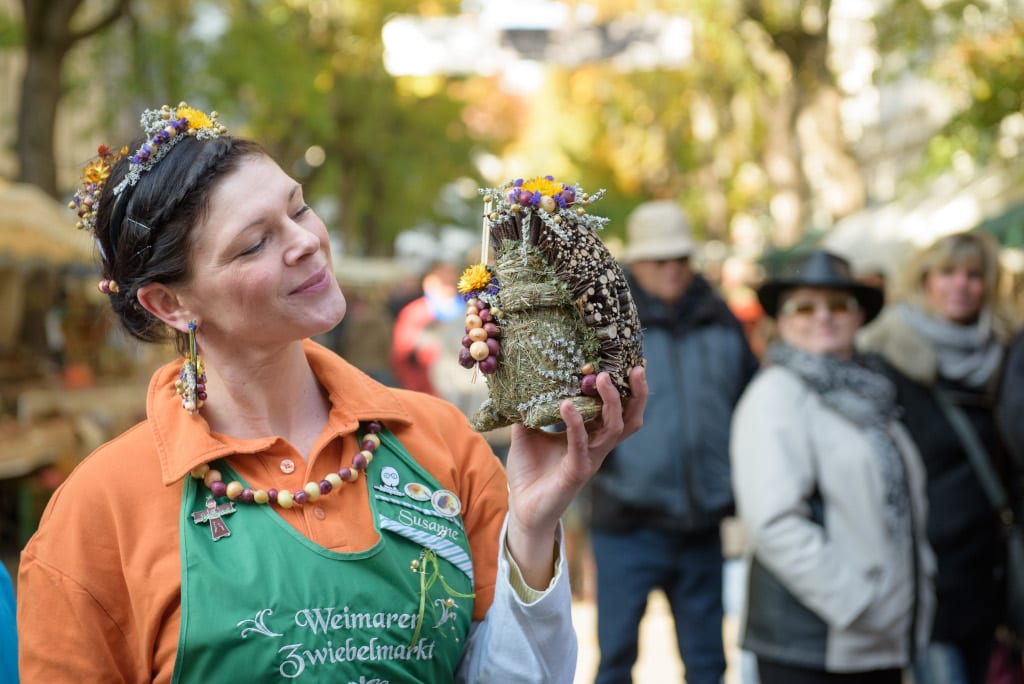 Dubbed the Teutonic Glastonbury by the Telegraph, the Weimar Onion Market, takes place each October in the architecturally stunning medieval city in Thuringia, Germany.

Hundreds of thouands of people are reckoned to descend upon this city of 65,000 residents during the festival.

History of the Weimar Onion Market

The oldest folk festival in Thuringia, the Weimar Onion Market dates back to 1653. In that year it was decreed that, during the second week of October, a large market should be established to display and sell agricultural products.

What to expect at the Onion Market, Weimar Germany

Hundreds of stalls in the main square will display a huge variety of onions and other agricultural products. The onions are sometimes braided or made into little dolls and cakes.

Goethe, lived in Weimar from 1775-1786 and then again from 1786, and favoured the onion braid. It is recorded that he had heart shaped braids of onions hanging over his desk. Just to give you the scale of this eye-watering product, in one year more than 35,000 onion braids were sold. Many of the stalls are highly decorated and add great colour to the event.

The festival is not only about onions and agricultural products however delectable they are, craft stalls sell pottery and woodcraft from the mountainous forested region of Thuringia with its medieval villages and Lutheran connections. There are many different beers to sample and food stalls abound. Music and street artists are also a great feature of the weekend. The atmosphere is so buzzing that it has been compared to a huge music festival.

Places to See in Weimar

Famed for its innovative development of art, and music Weimar – the starting point of the Weimar Republic from 1919-1933 – conjures up an image of creativity and free artistic expression.

Take time out from the festival to explore this classical World Heritage city, home to Goethe and Schiller, with its eleven sites designated to the Enlightenment and its Bauhaus connections.

The Schloss Belvedere is a baroque summer palace with a fine collection of 18th Century art and furniture, with landscaped grounds and a notable orangery. Also visit the Goethe–Schiller Monument, a bronze sculpture dating from 1857, as well as Goethe’s House and the ornate and newly restored Duchess Anna Amalia Library, with its excellent collection of manuscripts, books and music.

There are many places to stay during the festival weekend, but book soon (see below) as it is likely to be extremely busy.

Thuringa is part of the Cultural Heart of Germany with Saxony, read about Mark Bibby Jackson’s adventures in Dresden: Castles, Steam Trains and a Mickey Mouse Republic, or Things To Do in Leipzig: From Bach to the Spinnerei.

When is the Weimar Onion Market 2022?

Where is the Weimar Onion Market?

Flights to and Accommodation for the Weimar Onion Market

Find the best deals on flights and hotels in Weimar and the rest of Germany using our comparison engine, which scans all the major booking sites.

Things to do in Weimar and Saxony-Thuringa

For further ideas on what to do in Saxony and Thuringa, the Cultural Heart of Germany, click here, and for Weimar, here.

Watch a video of the Onion Market, Weimar Germany here. All images courtesy of www.weimar.de. Cover photo by Candy Welz.