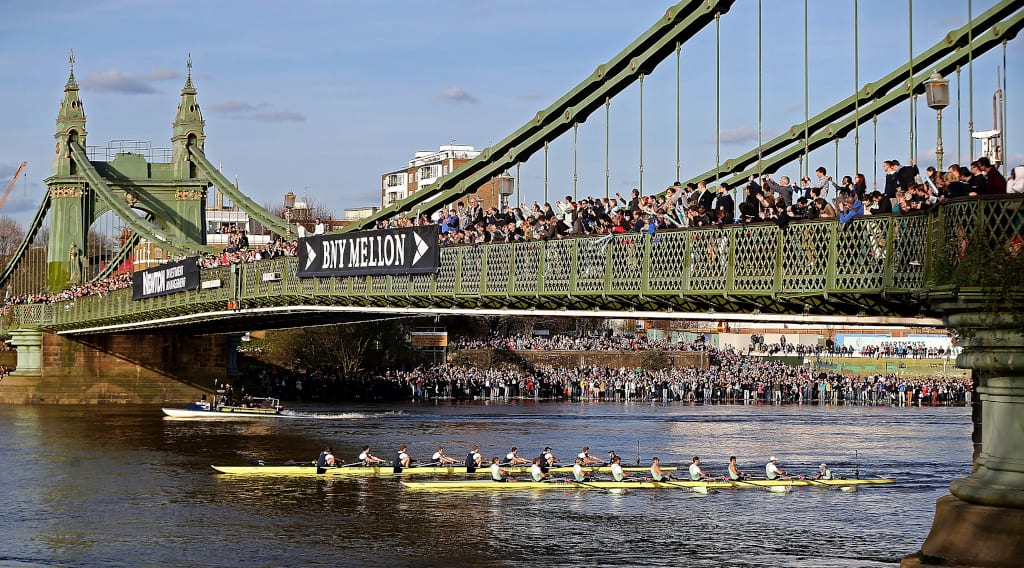 How about watching a sport that demonstrates strength and endurance as well as being, at the same time, a quintessentially English cultural icon? The Oxford Cambridge Boat Race is in town and runs from Putney to Mortlake in south west London around a long loop in the Thames.

There are eight rowers and a coxswain, or ‘cox’, to steer the boat in boat race crews. Both sides are known as ‘blues’ with Cambridge in light blue and Oxford in dark. A quarter of a million spectators flock to the banks of the Thames to see this annual event. If you do not want to watch from the river bank there are big screens set up at Bishop’s Park in Fulham and in Furnivall Gardens in Hammersmith. Food and drinks will be sold at both locations.

The university boat race covers just over four miles and the best time is under 17 minutes; so don’t be late.

Donations go to support the Chiswick life boat and to save lives on the River Thames.

The History of the Boat Race

In 1829, two friends, one at Oxford and one at Cambridge, challenged each other to a race at Henley-on-Thames. Oxford won easily, but a counter-challenge was made and Cambridge won the next race in 1836. The races became yearly from 1856, with interruptions for the world wars.

From 1927 the women’s Boat Race was added to the schedule. Currently, Cambridge has won more races in both sections.

Stretching from Putney to Mortlake on the River Thames, the course was first used for The Boat Race in 1845. It has been the route for every Oxford and Cambridge Boat Race since, except for 1846, 1856 and 1863 when the race was held in the opposite direction.

Crews toss to choose which side of the course to row; the Middlesex and Surrey sides. This can be significant as the course has considerable bends and boats can cross over if there is adequate leeway.

Boat race timings vary from year to year determined by the tide. The Men’s Boat Race is an hour-and-a-half before high tide, with The Women’s Boat Race a further hour before so that the crews are rowing with the fastest possible current.

When is the Oxford Cambridge Boat Race 2023?

This event is free. Find a spot along the river, though remember that good vantage points will fill up well before the race begins. A helpful map of choice locations, including pubs and bridges is here.

Flights to London and Getting to the Boat Race

There are direct international flights to all London airports from much of the world.

The Boat Race takes place in south west London, so it is reachable on the red double-decker buses (numbers: 14, 22, 39, 74, 85, 93, 220, 265 and 270), the London Underground (particularly the stations Putney Bridge and Hammersmith), or mainline rail stations at Chiswick and Barnes Bridge).

From any hotel in London you can take public transport to the route of the Boat Race.

For more information on the Oxford Cambridge Boat Race