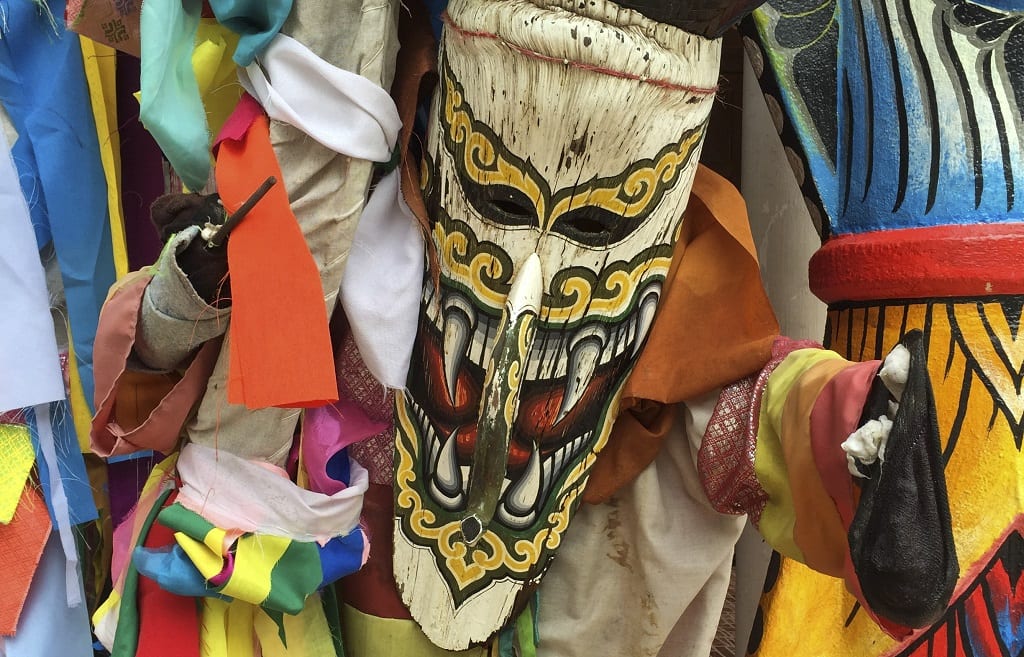 Phi Ta Khon is a joyous and outrageous festival that is attended predominantly by Thai visitors. Its colourful procession is more or less comparable to the carnival parades in the West with ghosts and fertility as themes. At the festival’s many parties and events, local animistic beliefs mix happily with Theravada Buddhist traditions and elements from Brahmanism.

What to expect during the Phi Ta Khon Festival

Expect to be confronted with oversized phalluses reminiscent of the Japan Penis Festival, which are displayed prominently as symbols of fertility – often with a healthy sense of humour and cheekiness.  Some men will daub their bodies with mud to represent rice fields, while creative representations of water buffaloes are there to force the ghosts to deliver enough rain for the coming farming season.

The original and sometimes frightening representations of the ghosts come in different sizes. The Phi Ta Khon yai (meaning large) can only be made by those who received permission from the ghosts. They have been crafted in the same way for hundreds of years. The Phi Ta Khon lek (meaning small) can be made and depicted by anyone.

The costumes are handmade with participants trying to outdo each other in size and colour. The most important feature is of course the large, impressive mask, but also the bells attached at the back are an important part of the costume. In the past old cowbells were used but nowadays anything that makes noise will do. The masks are made of rice husks or leaves of coconut trees, with a bamboo-woven receptacle – used to steam sticky rice – attached on top. The ensemble is then painted to resemble the face of a ghost. Prizes are given for best masks, costumes and dancers.

The three days of the festival

The first day of the festival is called Wan Ruam and is the highlight of the whole event. A dazzling parade sees men dressed up in their creative costumes and masks making their way through the streets with lots of music and noise. By ringing cowbells and beating big drums, the ghosts of the dead are woken up while the masks are shown off to the public with lots of dancing and singing.

For a similarly-themed event in Africa, visit the Voodoo Festival Benin.


On the second day a procession takes place with a holy Buddhist statue representing the arrival of Prince Vessantara (see below legend). The prince is welcomed with the launch of bamboo rockets to encourage the weather gods to deliver a rainy and fertile planting season. This is similar to the Rocket Festival or Bun Bang Fai in other parts of the Isaan region, but on a smaller scale.

On the third and final day monks recite the 13 sermons of the Vessantara Jataka which are stories about Siddhartha’s last life before he became the Buddha. The local residents come together at the Wat Ponchai temple to listen to the sermons that last all day and night. Wat Ponchai is a small temple with a museum attached to it that is opened all year round.

The legend behind the Phi Ta Khon Festival

The Ghost Festival originates from a Buddhist legend related to Prince Vessantara who is believed to be the penultimate reincarnation of the Buddha. In the legend the generous prince led a white elephant with rain-making powers to another country suffering from drought. This angered the people who now feared drought themselves and they banned the prince to the forest.

When they realised the generosity of the prince’s act, they regretted banning him and welcomed him back with a big party. The festivities were so big and loud that they woke the forest ghosts who followed the prince and ended up joining the party. The original term phi tam khon means ‘to follow someone’.

Where is the Phi Ta Khon Festival?

The festival takes place in Dan Sai, a small town in one of Thailand’s most sparsely populated provinces. When Phi Ta Khon doesn’t take place, Dan Sai is a quiet but pleasant spot suitable for travellers who appreciate a slow-paced life with few tourists in sight. It can be reached by highway from Loei or Phitsanulok on Route 2013.

When will the Phi Ta Khon Festival be held?

The exact dates are usually announced by local spirit mediums but the festival typically starts on a Friday during the first weekend after the sixth full moon of the year. It is expected that it will take place on 11 June 2021. Please double check with TAT closer to the date (see below for contact details) before making your travel arrangements.


Book well ahead if you intend to stay in Dan Sai during the festival. Count on booking minimum a month in advance if you stay in Loei which is 80km away. Dan Sai can easily be visited in a day trip from Loei. To find the best deals, please search via our Hotel Booking Portal.

For more details about Phi Ta Khon and travel ideas for Thailand: