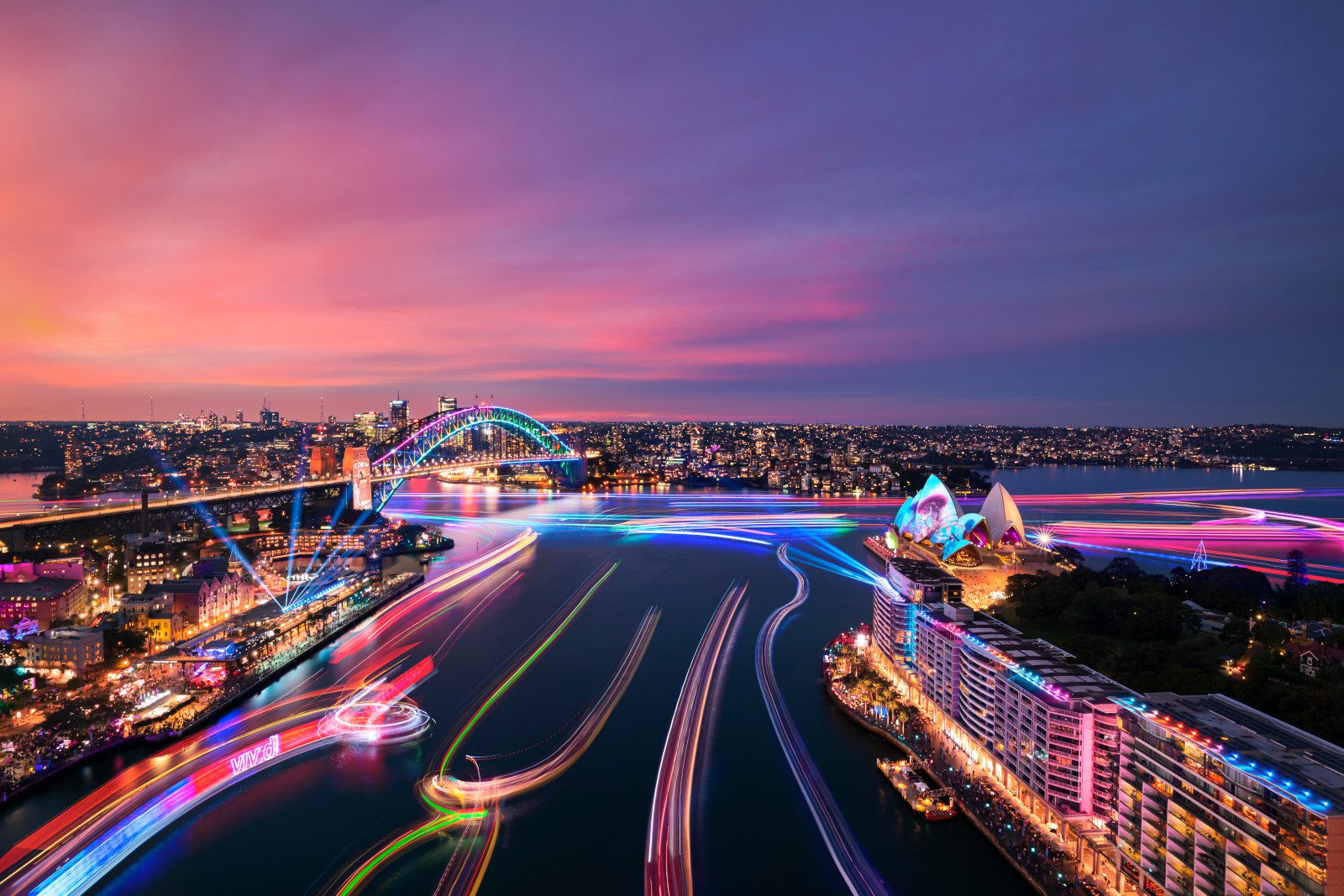 Regarded as the biggest light, music and ideas festival in the South, Vivid Sydney will light up the city’s opera house and surrounding harbour area from 27 May to 18 June, 2022. Over two million people are expected to attend.

Vivid is Australia‘s most beloved and awarded festival, according to the organisers. This year The Cure and Spike Lee are among the many participants at the festival, which is divided into three segments: Vivid Light, Vivid Ideas and Vivid Music.

Staged over 23 nights, the 2022 festival will deliver mesmerising art displays, 3D light projections, uplifting live music performances and deep-dive discussions from the world’s brightest minds. Plus, in a festival first, the renowned Light Walk will stretch continuously for 8km, linking the Sydney Opera House to Central Station with 47 installations and projections.

Designed by renowned Sydney artist Elliott Routledge, who is also featured in the 2022 festival program, the Countdown Clocks will be located outside Sydney’s Queen Victoria Building at Town Hall and Gateway Plaza, Circular Quay. Sydney visitors can check out these Insta-worthy timepieces, capture a picture and share on social media using #vividsydney. A virtual version will also feature on vividsydney.com.

Details can be found here.

Festival Director Gill Minervini, who will direct her first Vivid Sydney in 2022, said this year’s program captures the essence of Sydney’s soul, and what makes the city so authentically unique. If you are also interested in playing pokies, click here: pokies near me.

“Vivid Sydney tells the compelling story of Sydney’s creativity and innovation, shared with a distinctive narrative that resonates around the world. We are innately drawn to Sydney’s urban landscape as a unique canvas, bringing us together to celebrate, reflect and immerse ourselves in this charismatic, surprising and intriguing city,” said Minervini.

“This year Vivid Sydney will deliver fresh experiences for festival-goers. We are proud to have such an impressive collection of Sydney’s most prolific and world-renowned artists involved in the 2022 program. This includes the unmistakable work of Ken Done, delivering the Customs House projection with For Sydney With Love; and Ramesh Mario Nithiyendran’s multi-limbed avatar Earth Deities, enthralling audiences with animated fire and electricity.”

Vivid Sydney’s 2022 Light Program promises to captivate with several firsts for the event. This includes the longest continuous Light Walk, which will activate new areas of Sydney’s CBD including the Goods Line and Central Station, as well as a way-finding installation to guide festival-goers along the Light Walk, plus the festival’s largest ever laser installation.

For Sydney With Love, Customs House, Circular Quay
In collaboration with Sydney-based projection specialists Spinifex Group, Sydney artist Ken Done captures the joy of Sydney like no other, inspired by his 80-year love story with the city. For Sydney with Love is a celebration of Sydney, its icons and natural environment – on the foreshore and the Harbour, under the sea, in the sky and through the artist’s imagination.

Earth Deities, Hickson Road Reserve, The Rocks
One of Australia’s hottest artists, Ramesh Mario Nithiyendran who grew up in Western Sydney, specialises in large-scale sculptural forms fabricated from compacted earth, steel and paint. His multi-limbed avatar generates spectacle, ritual and gathering, and will enthral audiences with animated fire and electricity.

Convergence, The Goods Line, Central Station
Produced by Sydney’s own Mandylights, Convergence is a fully immersive journey of light and sound which will transform the disused Goods Line railway tunnel for the first time ever. Presenting the largest scale laser installation at Vivid Sydney, this is a never to be forgotten experience.

Future Natives, Various locations
For the first time in the festival’s history, the Light Walk will run continuously for 8km from Sydney Opera House to Central Station, with visitors guided along the Light Walk by Future Natives, a sculptural way-finding installation featuring a flock of 200 Sydney bird species created by Sydney artist Chris Daniel.

The full Vivid Sydney program will be announced in mid-March. Go to vividsydney.com for more information. Vivid Sydney is proudly owned, managed and produced by Destination NSW, the NSW Government’s tourism and major events agency.

Sydney is a wonderful destination in itself, but if you are looking for ideas on what to do elsewhere in New South Wales, click here.

Find the best deals on hotels in Sydney using our comparison engine, which scans all the major booking sites.

Youn can also book your flight to Sydney here too:

For more information on Vivid Sydney 2021.