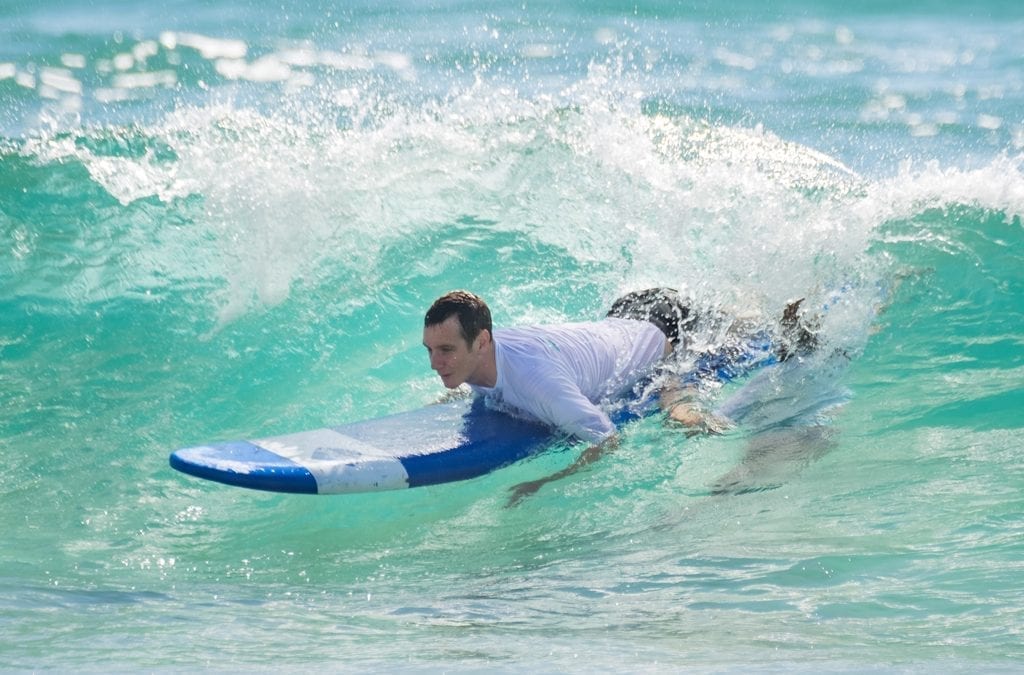 Triathlete brothers Alistair and Jonny Brownlee took time out April 9, following their participation in the Gold Coast 2018 Commonwealth Games, to bask in the golden Queensland sunshine and try their hand at surfing the world renowned Gold Coast waves.

Along with a long list of accolades between them, including Commonwealth Games champion and Olympic gold, silver and bronze medals; the brothers are known for their heroic finish at the 2016 World Triathlon Series in Mexico, when Alistair gave up his chances of winning the race to help Jonny over the finish line. 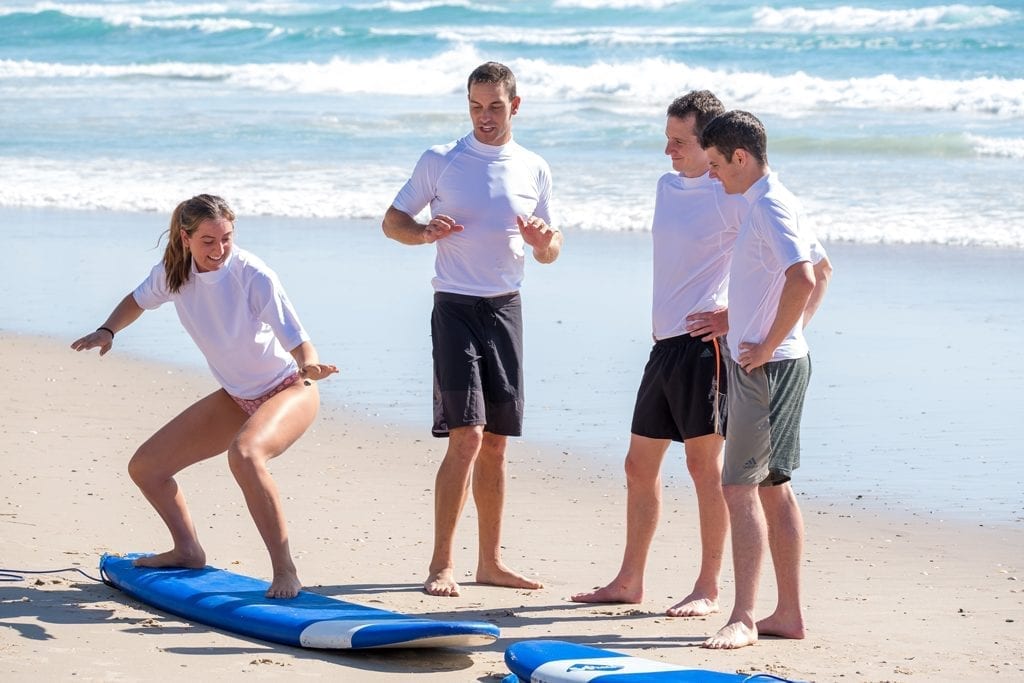 Alistair and Jonny have spent a number of weeks in Queensland in the run up to the games, training on the Sunshine Coast, before heading down to compete in the Gold Coast 2018 Commonwealth Games. Following their respective races, the pair took a well-deserved time out to immerse themselves in the local culture and give the quintessentially Australian sport of surfing a try.

To ensure the pair were fully prepared to tackle the iconic waves at Burleigh Heads, they were also joined by Gold Coast pro-surfer, Kobie Enright, and ironman champion, Matt Poole.

Alistair Brownlee said of his experience in Queensland: “The Gold Coast Commonwealth Games 2018 has been a fantastic experience. I’ve been lucky enough to come to the Gold Coast a few times before and it has always been a brilliant place to visit, and obviously combining that with a major games sporting event is something really special. There is so much you can do and it is a real top class tourist destination. Obviously, it’s known for its beaches. The water’s brilliant, great sea to swim in and really good weather as well. There’s actually really nice things you can do back from the coast in the hinterland around Springbrook and Tamborine Mountain. I even got to see a koala this morning.” 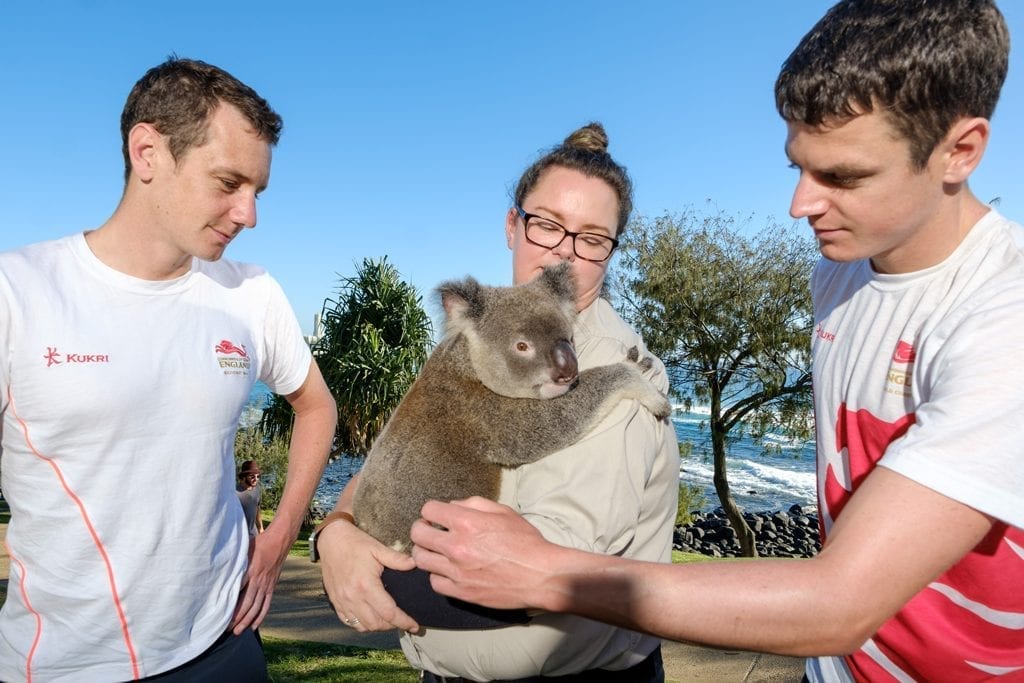 Jonny Brownlee also commented: “My highlight, obviously apart from the Commonwealth Games, has been the sea. It is beautiful. Coming from England we don’t really get to experience sea like this where you can swim in 26, 27 degrees. It’s clear, it’s beautiful, the waves are amazing. And obviously the sun – to be able to go out training in the sunshine at 5 o’clock in the morning when the sun is already out has been absolutely amazing. The lifestyle on the Gold Coast is something that’s very nice… here on the Gold Coast it is a very outside lifestyle. People are up outside at 5 o’clock in the morning running along the beach or cycling in the countryside. I could get used to that.”

Federal Minister for Trade, Tourism and Investment and Gold Coast MP, The Hon Steven Ciobo also welcomed the brothers at Burleigh Heads beach today. Minister Ciobo said the high number of UK tourists visiting Australia was a testament to the camaraderie between both nations.

“The Brownlee brothers’ strong and endearing sense of mateship is not only one that is personified among many Australians, but has also long been a sentiment held between our country and our close ally of Britain,” he said. “The United Kingdom is our third most valuable tourism market and fourth largest in terms of visitor arrivals, and UK arrivals are the highest they’ve been in more than a decade, boosted by the influx of English cricket fans during the recent Ashes series.”

For more ideas on what to do apart from surfing when in Queensland, read: Visit the Gold Coast, not just for the Games.

The Commonwealth Games 2018 (GC2018), are currently being held on Queensland’s Gold Coast. Over 6,600 athletes and team officials from 71 nations and territories have congregated on the Gold Coast to take part in this spectacular 11 day sporting and cultural event. GC2018 is the largest sporting event Australia will see this decade and the biggest sporting spectacular the Gold Coast has ever seen, proving there has never been a better time to experience this captivating destination.

Combining fantastic weather, state-of-the-art facilities, and a welcoming local community, the Gold Coast is the ideal home for the global event. Known as Australia’s playground for entertainment and adventure, the Gold Coast is also placing itself firmly on the map as an up-and-coming hotspot for travellers, revellers and hipsters. As quirky bars and stylish restaurants continue to pop up along the famous stretch of coastline, this is now one of the hottest places to experience on Australia’s pacific coast.

For more information of the Gold Coast 2018 Commonwealth GamesTM go to: https://www.gc2018.com/

For more information on holidays to Queensland go to: www.queensland.com

For more information on holidays to Australia go to: www.australia.com